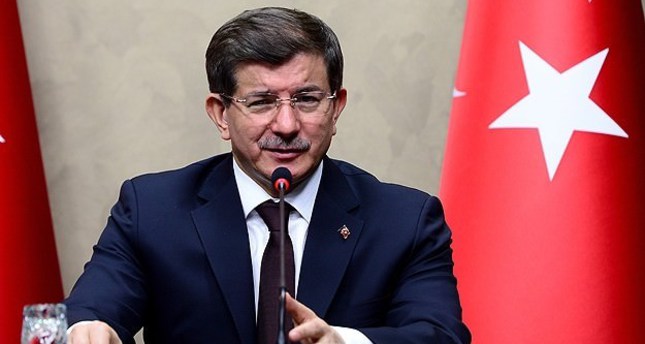 by Anadolu Agency Feb 01, 2015 12:00 am
Turkish people are an essential part of Europe, Turkey's Prime Minister Ahmet Davutoğlu said late on Saturday in his address to the nation.

Davutoğlu addressed Turkish citizens and expatriates in his "On the Path to New Turkey" speech televised on Saturday.

Pointing to the obstacles in Turkey's EU membership, Davutoğlu said those adopting anti-Muslim and anti-Turkish stances would not be able to overshadow either the historical realities or Turkey's willpower.

Davutoğlu reiterated that he had met with religious representatives of non-Muslim and Alevi people earlier this month and that they exchanged views on the common cultural riches of the Turkish land.

"This land is a place that inspires mercy," he stressed.

"When we were walking together in Paris with all the world leaders, our aim was to show that no terror act around the world could be identified with Islam (...) But we will also not remain silent over any type of insult against our Prophet Muhammad."

He underlined Turkey's fight against terrorism. Terrorist acts have never been tolerated in the country, he said.

Turkish PM also spoke about his attending the World Economic Forum in Davos as the holder of G20 term presidency.

Turkey assumed the G20 presidency on December 1. The first G20 Finance Ministers and Central Bank Deputy Governors' level meeting will be held in Istanbul on February 8-9.

"Turkey, with the G20 presidency, will be a bridge to justice between the least and the most developed countries," Davutoğlu said, repeating the word justice three times.

"If there will ever be an international peace and tranquility, and brotherhood for humanity, the magic word is justice."

Justice and mercy go hand in hand, he stressed, and said the country's Disaster and Emergency Management Authority, or AFAD, is a great success story for Turkey.

"AFAD carries our mercy all across the world," he said voicing gratitude to the institution, which he said has become one of the leading aid organizations in the world.

Referring to the developments in Turkey's defense industry, PM said the first national warplane prototype will have been produced by 2023.

He said that countries that cannot defend themselves and do not have a national defense industry will only be "chanting slogans" on their independence.

"A country's future is ensured through its defense industry in a similar way as peace and stability is ensured through economy," Davutoğlu said, adding that inflation, current account deficit, and interest rates are decreasing while production has been increasing in Turkey.

He also explained in detail the recent reforms in labor and family planning.

Labor reforms announced last Wednesday are targeted at reducing the informal economy as well as boosting employment, and supporting women's participation in the workforce.

"We will provide mothers with the opportunity for part-time work after they use up the normal paid maternity leave of 16 weeks," Davutoğlu said as he launched the government initiative titled "Program on Protection of Family and Dynamic Population Structure."

The Turkish PM said those are all signs of Turkey's turning into a global power and that they will be noticed first within the country and later in Europe, Asia, Africa, and all across the world.