Turkish people’s nature is inclined to a presidential system 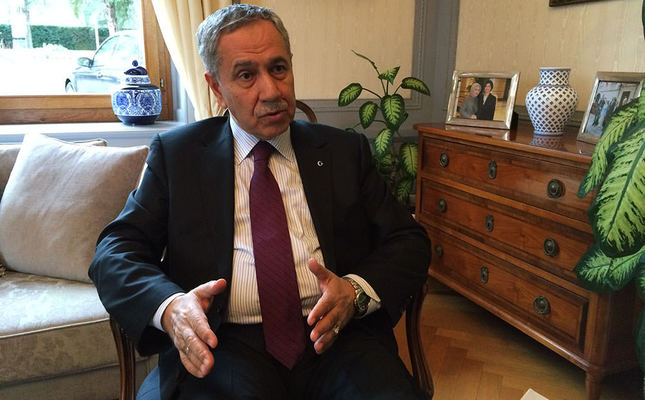 Deputy PM Arınç, in an exclusive interview with Daily Sabah, said the AK Party’s aim is to have enough seats in the June election to form a new constitution and later to change the current political structure to a presidential or semi-presidential system

Deputy prime minister and government spokesman, Bülent Arınç, is an important figure in Turkish politics who has been a deputy for 20 years and in politics for 50 years in total. He was the head of Turkey's delegation at last week's U.N. meetings in Geneva regarding the assessment of human rights in Turkey. Daily Sabah spoke with Arınç on different topics ranging from the Geneva meetings to domestic politics.

President Recep Tayyip Erdoğan has claimed that a presidential system would consolidate Turkey's power. Do you agree with this position?

We can think that in our people's nature and thought process, they are more inclined to strong leaders in the political system. If the people support a presidential system of government, I think that it would be more successful.

The first aim of the June elections is to have a count of sufficient seats to make a new constitution. Without a new constitution, it is impossible to have a presidential or semi-presidential system. The Constitution and the structure of governance should be in accord with each other, however, there is none at the moment. There is a popularly elected president who uses the authority granted by Parliament. This is a discordant. This may not cause major issues, but may result in two-headed governance. If there is to be a presidential or semi-presidential system, all of its elements should take place in a new constitution, and if the people accept this new system, it should be implemented. We can see this through a referendum. If the people do not want this change, the Constitution should be regulated accordingly, or this two-headed government may cause tensions between the president and government or institutions.

Last week the U.N. Commission of Human Rights has finished a second term review on Turkey in its Universal Periodic Review Mechanism and you were the head of our delegation. How do you evaluate your contacts at this meeting?

The first review on Turkey was done in 2010 and it will continue to happen once every four years. I attended this meeting due to being responsible for human rights. There are two years of work behind these meetings. We met with many representatives of different ministries such as Foreign Affairs, Internal Affairs, Family and Social Policies and Justice, and discussed our latest situation on the topics that were directed as questions by the other countries.

Our work was a success. During the existence of the Universal Periodic Review Mechanism, no one has faced as many questions as Turkey. Representatives of 122 countries asked 278 questions or gave advice. After the meeting 20 representatives came and congratulated us. Even, the trio of Cuba, Saudi Arabia and Gabon stated that our presentation was very successful.

On the second day all of the topics that Turkey has solved or is on its way to solving were put aside and we answered some questions and faced criticism we disagreed extensively with.

Except for a couple of countries that asked accusatory questions, all of the countries' speeches were encouraging. I can say in honesty that this meeting was a source of pride for us. As a result, we have accepted 199 pieces of advice and questions out of a total of 278, because we were already carrying these out. We accepted 52 more on condition that we will inspect them and will have a precise result later. We denied the remaining 27 questions or advice.

The reason behind denying this is there were some countries that directed questions accusing Turkey instead of giving advice or asking honest questions. These countries were Greek Cyprus, Greece and Egypt. We denied Greek Cypriot's questions on the basis of not recognizing them diplomatically. We told them that we will have their questions and advice on record, but we will not evaluate them.

In this meeting, Armenia's question's content was a matter of curiosity. However, they did not use the word "genocide" and asked a question referring to international agreements. Since 2015 is 100 years since the alleged genocide, can this "positive" message be seen as a step toward improving Armenia-Turkey relations?

The Armenian spokesman used "genocide" as a general expression, not intending to accuse Turkey. They mentioned the removal of some blockades regarding humanitarian situations. We told them that they are able to reach other countries through Turkey. Also, there are flights to Armenia from Turkey. We have also aided them with humanitarian aims. We expressed that our vision is to be a good neighbor and friend with Armenia.

Of course, April 24, 2015 is an important date for them and their diaspora. We know that the allegations of genocide mostly originate from the diaspora and are not fully supported by the Armenian government and people. I do not expect improved relations with Armenia until April; this is against the nature of the situation. It cannot be expected that a country owing its existence to these allegations take a sharp turn such as this, not in its centennial year. However, I know that there will be positive developments in the future.

Five years ago, we signed some agreements with Armenia in Switzerland. While seeming unwilling to Armenia, we said that we could open our borders and establish diplomatic relations with some conditions. One of the conditions was its dispute with our friend and neighbor Azerbaijan. With the improvement of that relationship, we were going to take some steps simultaneously. Maybe knowingly, Armenia disrupted this. However, I know that the Armenian people and government want to consolidate their relations with Turkey. They need it and we also have a common history with both its tragedies and happiness. Known as the "Loyal People" in the Ottoman Empire, we have to put the Armenian uprisings in the last decades of the empire aside and need to continue our historical togetherness.

This togetherness is not exclusive to Armenians, but also for Jews and Greeks. We come from a multicultural society. We are talking about a Turkey where everyone has internalized the culture of coexistence. This feature sets an example for the world. Actually, the EU should have let Turkey join solely due to this feature.

You have said that you are expecting positive developments regarding relations with Armenia. Are there any preparations for this?

No, this is already our traditional foreign policy. We always seek a zero-problem policy with our neighbors. In this context, we are currently not in a new project with Armenia. However, the conditions may bring us to a point to establish diplomatic relations, even to friendship. While it is Armenia who should take steps, we do not expect them to show any inclination until April is over. If in April they do not show rash behavior, we may think this as a positive development and try to conclude this affair in friendship.

In the past weeks you made a statement regarding the improvement of relations with Egypt and Gulf countries. Is it possible to interpret these statements as an effort to regulate relations?

Many other politicians, including myself, would express that Egypt and Turkey have a common ground in history and that regarding our roles in the Middle East, there was always a friendly relation between the countries. However, since the last change of regime in Egypt, our president and government's principal attitude toward Egypt is obvious. In the short term, I find these sustained relations would harm both Egypt and Turkey, leaving both countries indifferent to the regional developments, which is dangerous because Egypt is an important country in the Middle East, as is Turkey and Saudi Arabia. Even Qatar who stood with us has revised its relations and agreed with Egypt. At the moment, there are not any countries other than Turkey that disagrees with the change of regime in Egypt. We can always express our disagreement regarding the change of regime in Egypt, however, realpolitik shows us that Turkey and Egypt are dependent on each other. There must be cooperation among these countries to calm all the conflicts happening and achieve peace in the region. Because of this, I find our president's attendance at the funeral of the Saudi king correct. I think there will be a visit to Saudi Arabia by the president or prime minister in the near future due to King Salman assuming the throne. Saudi Arabia is an important country, if you think that President Barack Obama attended the funeral with his wife. Saudi Arabia is our traditional friend. I still see it that way. If there is distance between us, the elimination of it is a duty that falls on all of us.

If we return to our subject, Egypt should give a date for transitioning to democracy if they want to take a step towards Turkey. They should permit to some political parties' activities. Still held unjustly in prison, Mohammed Morsi could be freed, as well as the 1,000 political prisoners. These are political prisoners and nowhere in the world would they be allowed to be executed.

Therefore, they have to give a sign that they are taking a step toward democratization that shows that they are giving up rigidity in relations with Turkey. It is easier said than done. I know it is a hard thing to do for Egypt. Thus, there may be a need for "catalyst" countries to ease the attitude of Egypt. Both the region and the world need this.

As you are the deputy prime minister responsible of minorities, do you think we will see more candidates for parliament from minorities?

There are very valuable people among minorities representing their community in the field of science, arts, etc. In the June elections, there should be more candidates from minorities as well as women and young deputies. In the foundation Parliament, according to laws, there is a member that is from the minority foundations. We are benefiting very much from their existence. As I get to know them, I think that they would serve very well in Parliament. I will talk about this with the prime minister personally. We should work for the improvement of this unity as it was in the past. The prime minister has commissioned Etyen Mahcupyan as his advisor, which was a very positive development. I am expecting steps to be taken on this issue during the election process.