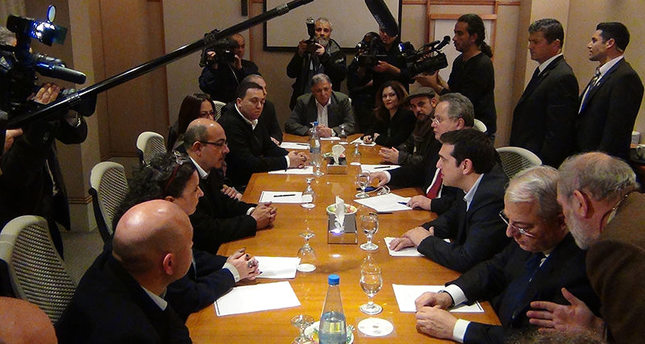 The new Greek PM’s encouraging gestures during his Cyprus visit should not make one forget that equitable sharing of energy resources is key to a solution on the island, says the Turkish government

Alexis Tsipras, the 41-year-old leader of the anti-austerity party Syriza, who has recently been elected Prime Minister of Greece, has broken with Greek tradition and become the first prime minister to pay a visit to Cyprus Turks, coming as a surprise to many.

Touching on the Turkish survey vessel Barbaros in the area where Greek Cyprus intends to conduct exploratory drilling for oil and gas, Tsipras said that Turkey should immediately withdraw the vessel, which he described as an obstacle, before steps could be taken on Cyprus to strengthen inter-communal trust.

However, the Turkish government ruled out pulling out its vessel, arguing that Greek Cyprus should acknowledge that Turkish Cypriots also have a right to the natural resources of the island, and that paused reunification efforts should resume for a permanent resolution.

Greek Cyprus suspended talks in October 2014 in retaliation for Turkey's warship mission to monitor oil and gas exploration activity off the Cypriot coast. Turkey objects to Greek Cyprus's plans to unilaterally exploit hydrocarbon resources off the island. Negotiations between the two sides had resumed after a two-year break in February 2013.

After the Cabinet meeting on Monday, Deputy Prime Minister Bülent Arınç told the press that both Turkish Cypriots and Turkey are willing to contribute to reunification talks initiated by the U.N., and that Turkey has legal rights to conduct drilling activities in Cypriot waters.

Tsipras made his first visit abroad to Greek Cyprus on Monday, in a bid to underscore the historical ties between Greece and Greek Cyprus. He said that Greece's support to Greek Cyprus will continue in Cyprus reunification talks, as he underscored that a just and sustainable solution on the island is of the utmost importance for Turkish-Greek relations, the E.U. and stability in the eastern Mediterranean.

During his visit to Greek Cyprus, Tsipras also held talks with Turkish Cypriots, marking the first time a Greek prime minister met with Turkish Cypriots on Cyprus. Tsipras met with the Turkish Cypriots in the hotel where he was staying, and the meeting was held in a positive atmosphere. Tsipras asked the members of the non-governmental organization, the Famagusta Initiative, to contribute to the solution to reunite the divided island of Cyprus.

A Turkish Cypriot, Niyazi Kızılyürek, who participated in the meeting with Tsipras, spoke to Daily Sabah sharing his impressions of the talks. Kızılyürek said that during their meeting, the Turkish Cypriots had a chance to convey their concerns. Okan Dağlı, another Turkish Cypriot who attended the meeting, said it went well, and that Tsipras's attitude was distinct from the previous prime ministers of Greece. "The meeting may only be symbolic, but it marks the first in history. Many prime ministers arrived here, but none spared time for us. They did not even accept our request to meet. This is a significant occasion. The means to defuse the problem between the two communities on Cyprus were discussed. We came to the conclusion that a solution serves the benefit of both sides," Dağlı said. Tsipras had a photograph taken with the Turkish Cypriots following the meeting to mark the occasion.

There is no need for a new dispute between Greece and Turkey, Turkey's E.U. Minister Volkan Bozkır said Tuesday. In comments made to the media before leaving for the U.S., Bozkır said that Greece's economic slump would affect Turkey. He also said that Greece had "a lot on its table" right now. About how elections in Greece that brought Syriza's Alexis Tsipras to power would affect bilateral relations, the Turkish minister said, "We consider Tsipras' move to meet Turkish non-governmental organization officials during the Greek-Cypriot administration's visit a positive sign." He hoped for an end to the dispute over the island during Tsipras' term.

The president of the Turkish Republic of Northern Cyprus called on Greece's newly elected prime minister to change the country's Cyprus policy "radically," as negotiations on the divided island stalled last October. "If Greece's new prime minister Alexis Tsipras really wants to make a positive and peaceful contribution to his country and to the region, he should change their Cyprus policies radically," said Derviş Eroğlu in a public speech Nicosia.

"Tsipras should accept that there is also a Turkish community in Cyprus as sovereign as the Greeks," Eroğlu added.

In 1974, Greece attempted to annex the island via a coup was resisted by a Turkish peace mission in accordance with the 1960 treaty.

Consequently, the Turkish Cypriots set up their own republic in 1983, while continuing the search for reconciliation. While the E.U. recognizes the Greek-Cypriot administration on the island, Turkey recognizes the Turkish Republic of North Cyprus diplomatically.

Negotiations between the Turkish and Greek Cypriots resumed after a two-year break in February 2013. The previous round of talks had collapsed amid the Eurozone debt crisis, as the Greek Cypriot side took its turn to occupy the E.U. presidency in 2012. However, the Greek-Cypriot administration suspended the talks over the divided island on Oct. 7, 2014, after Turkey sent a ship to monitor an oil-and-gas exploration mission off the coast of Cyprus.