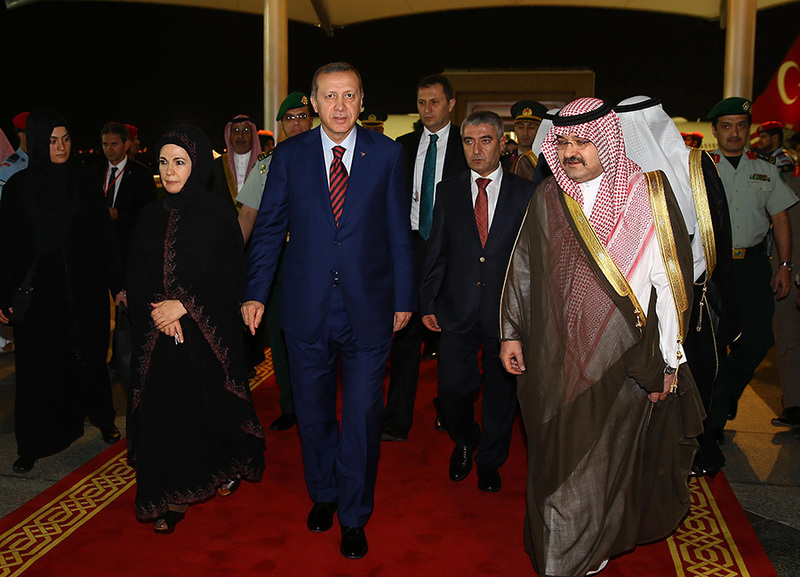 by Daily Sabah Mar 01, 2015 12:00 am
President Recep Tayyip Erdoğan arrived in Saudi Arabia on Saturday night where he visited holy Muslim cities and plans to hold talks with newly ascended King Salman and other Saudi officials on bilateral ties. Erdoğan was welcomed at King Abdulaziz International Airport in Jeddah in the west by Governor Mishaal bin Majid and Turkish Ambassador to Saudi Arabia Yusuf Demirer. Claims circulated in the Arab media say that King Salman will also pay his first official visit abroad to Turkey in the near future, as both leaders are known for their close relations.

Even though experts do not expect a major change in the country's policies under King Salman's rule, they anticipate that Saudi Arabia will review its stance on certain regional issues.

On Erdoğan's visit to Riyadh, political analysts studying the Middle East and Gulf countries highlighted the regional impacts of recovering relations between the two countries. Erdoğan's visit is seen as an indicator of recovering relations between Ankara and Riyadh that first surfaced when Erdoğan attended the funeral for late King Abdullah in January, suspending his African trip to head to Saudi Arabia. As soon as the death of King Abdullah was announced by Saudi officials, Erdoğan suspended his African tour for a day and attended the funeral. Also, a day of mourning was declared in Turkey following the death of the Saudi king.

During his visit to Saudi Arabia, Erdoğan performed "umrah" – a pilgrimage to Mecca and al-Masjid al-Haram, the holiest site in Islam during a non-pilgrimage season – and later moved on to Medina, where al-Masjid al-Nabawi, the second holiest site in Islam containing the burial place of Prophet Muhammad, is located. Erdoğan is scheduled to head to Riyadh on Monday to meet King Salman.

Before departing from Istanbul on Saturday, Erdoğan said in a press conference that the visit marks an occasion to boost cooperation between the two countries in all fields and discus the ongoing crises in the Middle East. "We will discuss the latest situations in Syria, Palestine, Libya, Egypt and Yemen," Erdoğan said, adding that the war against terrorism will be another topic high on the agenda. He said that Turkey has similar stances as Saud Arabia regarding many regional problems.

Egyptian President Abdel-Fattah el-Sissi is set to meet King Salman on Sunday in the Saudi capital. Asked by a journalist in Istanbul whether his schedule would allow a meeting with Sissi, Erdoğan said: "Are you joking?" "For such a thing to happen, serious positive steps need to be taken first." Turkey has been among the few countries openly describing the 2013 July takeover of power in Egypt by then Minister of Defense Sissi as a "military coup." Official ties between the two governments have been stormy since.