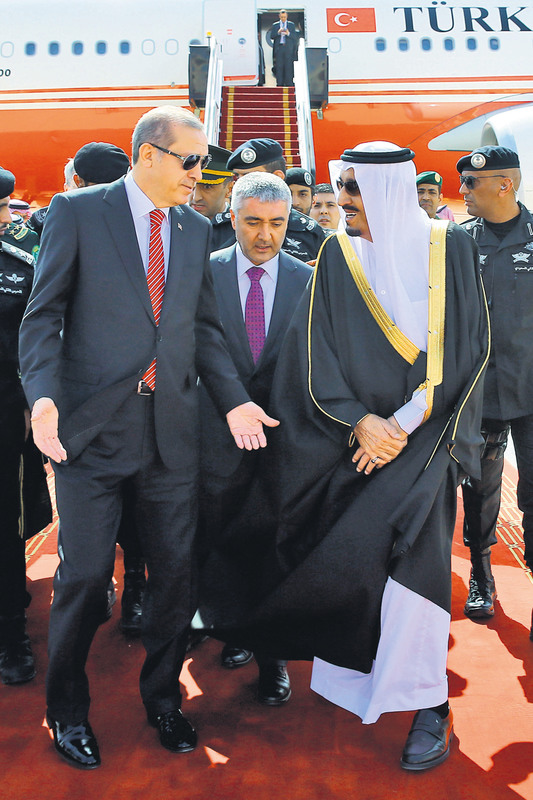 In a key meeting yesterday in Riyadh, President Erdoğan and Saudi King Salman agreed to boost cooperation in support for the Syrian opposition against the Assad government and ISIS

President Recep Tayyip Erdoğan's visit to Riyadh is a sign of recovering relations between Ankara and Riyadh, which is expected to further ameliorate ties between the two countries. Shared concerns and interests regarding developments in the Middle East have prompted the Saudi government and Ankara to pursue closer cooperation, an initial step reiterating support for the Syrian opposition. Erdoğan paid a visit to Saudi Arabia to hold talks with King Salman and other Saudi officials about bilateral ties. During the talks, the two governments stressed the need to increase support for the Syrian opposition. On Feb. 19, Turkey and the U.S. made an agreement to train and equip Syrian opposition forces, and it was announced by Defense Minister İsmet Yılmaz yesterday said that the training program for the Syrian opposition would be held in the central Anatolia province of Kırıkkale. The turmoil in the Middle East, including the war in Syria and the threat posed by the Islamic State of Iraq and al-Sham (ISIS), are common concerns for Ankara and the Saudi government.

They have come together to collaborate on how best to tackle the problems occurring in the predominantly Muslim countries. Erdoğan's visit to Riyahd has paved the way for expanding Turkey's power in mediating problems across the region.

The rift between the Saudi government and Ankara first surfaced when the Egyptian army, led by the-then general and current president, Abdul-Fatah el-Sissi, toppled Egypt's first democratically elected president, Mohammed Morsi, in 2013. The two countries differed in whom they supported and the ties between the two countries frayed as a result. Turkey's alignment with the Muslim Brotherhood leader was not welcomed by the Saudi government, which designated the Brotherhood as a terrorist organization. Despite the rift on this specific regional issue, which held significance for both countries, Erdoğan said that dissent should not adversely impact the ties between the two, in a bid to prevent relations from souring. Although relations did not explicitly deteriorate, a greater distance could be felt.

Now that the previous differences have been shelved with the change of the throne in Saudi Arabia following King Abdullah's death on Jan. 23, Turkey is hoping to thaw relations with newly enthroned King Salman. The current talks being held by leaders of both countries are aimed at boosting relations.

Erdoğan arrived in Saudi Arabia on Saturday night, where he visited the holy Muslim cities of Mecca and Medina and plans to hold talks with King Salman and other Saudi officials about bilateral ties. Erdoğan was welcomed at King Abdulaziz International Airport in Jeddah in the west by Governor Mishaal bin Majid and the Turkish ambassador to Saudi Arabia, Yusuf Demirer. Claims have circulated in the Arab press that King Salman will also pay his first official visit abroad to Turkey in the near future, as both leaders are known for their close relations.

Erdoğan's visit is seen as an indicator of recovering relations between Ankara and Riyadh, which was first unveiled when Erdoğan attended the funeral for late King Abdullah in January. As soon as the death was announced by Saudi officials, Erdoğan suspended his African tour for a day and traveled to Saudi Arabia. A day of mourning was also declared in Turkey on the Saturday following the death of the Saudi king. These gestures are perceived to be indications that Turkey is eager to leave political disagreements aside and foster closer bilateral relations.

Even though experts do not expect a major change in the country's policies under King Salman's rule, they anticipate that Saudi Arabia will review its stance on certain regional issues.

Upon returning from his African tour, Erdoğan stressed that his attendance of the king's funeral and the declaration of the one day of mourning was to show the importance the government attaches to bilateral relations. "There are topics that we agree on. On Egypt, as well as on Syria and Palestine there are issues where we don't see eye to eye. We don't want such differences to cloud bilateral ties," he said on Monday.

Erdoğan also said that he is hopeful that Saudi Arabia may change their negative view of the Muslim Brotherhood without prejudgments. He said: "Everyone should wait and see what King Salman does. I personally would like to go and visit him and wish him well within the next week or 10 days."