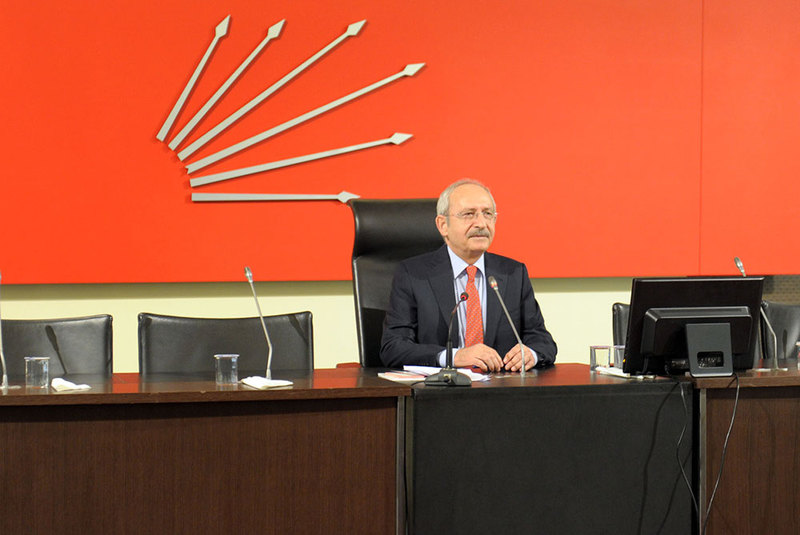 by Sinan Öztürk Mar 02, 2015 12:00 am
The chairman of the main opposition Republican People's Party (CHP), Kemal Kılıçdaroğlu, has said that they are shooting for 35 percent of the vote in the upcoming elections on June 7, despite poll results showing around 10 points less than Kılıçdaroğlu's desires.

Commenting on Kılıçdaroğlu's want for 35 percent of the vote in the elections, Prime Minister Ahmet Davutoğlu said if Kılıçdaroğlu's target is 35 percent at most, he should step down. "If the goal of a main opposition leader is to reach 35 percent of the vote in an election, he should resign. As the leader of the ruling party, I would have to pull myself together to target even 45 percent, let alone 35. It is not even alright to say [aim for] 50 [percent of the vote]. I should talk about the highest percent I could reach, which encompasses the entire nation," Davutoğlu said. He stressed the Justice and Development Party's (AK Party) target was to "win the hearts" of the whole population.

Speaking to Ahmet Hakan Coşkun from Hürriyet daily on a visit to the newspaper, along with the newspaper's other prominent writers and media conglomerate Doğan Holding's honorary chairman Aydın Doğan, the CHP leader made significant remarks regarding the upcoming elections.

Kılıçdaroğlu said that recent polls show the CHP's predicted vote percentage to be around 29.5 percent, and that they are targeting 34 to 35 percent of the vote. Recent polls show that the CHP will receive around 23 to 25 percent, which is lower than the votes it won in the 2011 elections.

KONDA Research and Consultancy predicts a similar percentage for the CHP with 23.3 percent of the vote while the AK Party, MHP and HDP will receive 45.4 percent, 15.1 percent and 10.6 percent, respectively.

MAK Research and Consultancy's polls foresee that the CHP will receive 24.8 of the vote, with the AK Party at 47.6 percent, MHP at 14.3 percent and HDP at 8 percent of the vote.

These upcoming parliamentary elections will be the sixth elections in which Kılıçdaroğlu, who has lost five elections, has led the CHP.

Kılıçdaroğlu also said that the party will work with the famous Turkish publicist Ali Taran on their election campaign, signaling a campaign that will focus on economic issues, although this is still uncertain despite there being only three months left until the elections.

Kılıçdaroğlu was reported to have said: "Democracy and media freedom interests intellectuals, not regular citizens. We will focus our promises on the economic field." Selin Sayek Böke, a prominent economist who was recently appointed as deputy chair in charge of economy, will be one of the most influential figures of the campaign.

Kılıçdaroğlu said that the HDP's possible exclusion from Parliament due to not meeting the electoral threshold would be unfair.