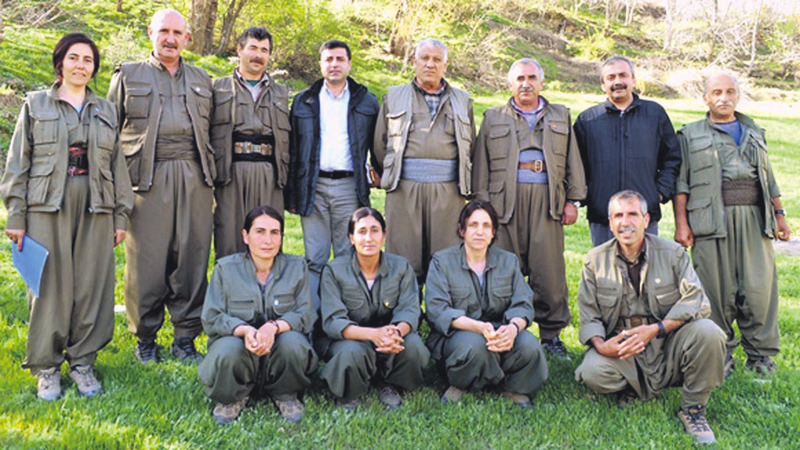 Prime Minister Davutoğlu says the PKK's disarmament, which is expected to provide momentum to the government-initiated reconciliation process, cannot be tied to preconditions

All eyes have turned to an expected announcement of disarmament by the PKK after a call was made by its imprisoned leader, Abdullah Öcalan, to lay down its arms, with Prime Minister Ahmet Davutoğlu saying that there can be no preconditions to disarmament. The disarmament will restart negotiations that have stalled due to attempts to cripple the reconciliation process, which was launched between Ankara and the Peoples' Democratic Party (HDP) in order to end the decades-long conflict between the state and the PKK. The two sides have been growing impatient about reaching a conclusion to the reconciliation process, and are on the brink of finally being able to discuss their aims without the threat of arms.

The reconciliation process, which has recently been on shaky ground as a result of being subject to numerous provocations, appears to have settled again after Öcalan called on the PKK leadership to hold a congress to discuss laying down its arms. HDP Deputy Sırrı Süreyya Önder, who quoted Öcalan, said on Saturday that Öcalan's call for a congress was a manifestation of his intention to disarm. Önder also read out the 10 items that will constitute the basis of the negotiations. Developments following Öcalan's call illustrate that both sides of the reconciliation process have a genuine will to conduct the process and to bring it to a conclusion.

The ditches that were dug by the PKK's youth branch during pro-Kobani protests to block police in some neighborhoods have been filled in as part of the peace effort. The practice of using illegal judges in courts established by the PKK will reportedly be discontinued. The PKK will also stop collecting taxes. The order will be maintained ahead of the elections.

The PKK is also convening the congress upon the call for disarmament and the date will be determined by Öcalan. Discussion of the 10 items is also expected to take place soon on İmralı Island where Öcalan is incarcerated. The HDP committee will reportedly be accompanied by several state officials and representatives from a monitoring board upon the request of the HDP.

Meanwhile, Prime Minister Ahmet Davutoğlu has said that the 10-item proposal, which will form the basis of negotiations once the PKK lays down its arms, does not constitute the "preconditions" for setting arms aside, and instead said that the items will be discussed after the disarmament occurs. Davutoğlu also urged the PKK to lay down its arms immediately after Öcalan called on the PKK leadership to hold a conference to discuss disarmament.

In a live interview, Davutoğlu rejected the notion that the 10 measures constitute "preconditions" for disarmament. His statement has come as a response to a view that HDP members are aiming to instil, which is that the PKK's road map will be shaped depending on negotiations based on these items. HDP Group Deputy Chair Pervin Buldan is one of the party members who has given the impression that the laying down of arms would not take place immediately and would instead depend on how discussions evolve.

"If a consensus is reached on the 10 items that are the basis of the negotiations, the PKK will hold the congress. Then we can talk about a new Turkey," she said. However, Davutoğlu firmly stressed that the opposite should happen in order to hold talks in a healthy environment.

The call for laying down arms came on Saturday in a landmark step in the reconciliation process, a government initiative that officially started in 2013 to end the decades-old conflict with the PKK, which has fought to carve out an independent Kurdish state since 1984."This is the cutting edge of the efforts we are making in the 35-year conflict," Davutoğlu said, adding that the statement was significant as it rejects violence outright.

Davutoğlu said that leaving arms behind will open the way for democratic politics, and when asked when the disarmament should be performed, he said: "Right away."

The HDP also proposed 10 measures to be taken in support of the resolution process, including "legal and democratic guarantees of free citizenship," "pluralistic democratic understanding toward definition and adoption of identity," "the defining criteria of a democratic republic" and a "new constitution that aims to adopt all democratic moves and transformations."

Davutoğlu also ruled out any possibility of a delay in the bill, when asked if the controversial Domestic Security Reform Package endorsed by the government could be suspended after the call for disarmament.

In response to the question of whether passing the security bill in its current form will hamper the reconciliation process, Davutoğlu said: "On the contrary, the process will work, as those who want to provoke it will not be able to. If the HDP is sincere in pursuing peace, it should be pleased [by the bill]."
Last Update: Mar 04, 2015 9:52 am
RELATED TOPICS