US vows to protect Syrian opposition, train them with Turkey 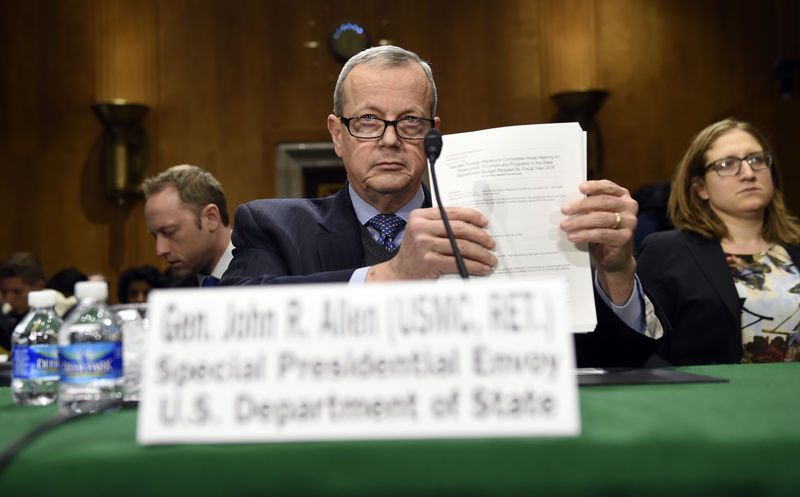 by Mehmet Solmaz Mar 03, 2015 12:00 am
The U.S. said on Monday that it will protect Syrian opposition fighters once they are trained and begin fighting against the Islamic State of Iraq and al-Sham (ISIS). The statement comes after NATO allies Turkey and the U.S. agreed to train and equip the moderate Syrian opposition group, the Free Syrian Army (FSA).

The deal between Ankara and Washington is expected to be a positive development between the two longstanding allies. Turkey wants Syrian President Bashar al-Assad's departure to be the focus in Syria, while Washington's priority remains battling ISIS insurgents. Turkey stresses that a comprehensive strategy, which includes creating safe and no-fly zones in Syria and ousting Assad while fighting ISIS, is needed for stability in the region.

Gen. John Allen, who coordinates U.S. coalition efforts against ISIS, said that when the training of 5,000 fighters is completed in 2015 and a total of roughly 15,000 fighters are trained over the next three years, the U.S. will provide air strike support.

"Not only we will train them, we will equip them with the latest weapons systems, but we will also protect them when the time comes," said Allen, who spoke at the Atlantic Council, a Washington-based think tank. "It is clearly part of our plan," he added.

Asked if the Syrian rebels would be requested to fight without air cover or a no-fly zone, Allen said, "All of those things are under consideration. So it's important that you not believe that we would not support these fighters." He also said the coalition was "pleasantly surprised at the numbers" of Syrians ready to sign up for the fight against ISIS. "It's certainly something that we are constantly watching."

Turkey, Saudi Arabia and Qatar have agreed on a training program for the opposition with the program in Turkey set to begin in about one month.
"I won't put a certain date on when the training will begin, but our assessment is that we could be ready some time within the next four to six weeks to begin actual training," Pentagon spokesman Rear Adm. John Kirby said on Friday. About 1,500 Syrian rebels have been screened and as many as 5,500 Syrians will be trained after about one year, Kirby said.

The train-and-equip program for Syrian opposition forces will be held in Turkey's central Anatolia province of Kırıkkale, the Turkish defense minister said on Monday.

National Defense Minister İsmet Yilmaz was answering reporters' questions in Ankara before attending the ruling Justice and Development Party's (AK Party) weekly meeting. "Turkey and the U.S. will set up a joint commission. This commission will decide on the people who will be trained in Kırıkkale," he said.

On February 19, Turkey and the U.S. signed a deal to train and equip Syrian opposition forces, with which the aim is to achieve a political transformation in the war-torn country on the basis of the Geneva Communique. The Syrian fighters trained in the joint program are expected to fight both ISIS and the Assad regime.

Meanwhile, the U.S. and Iraq are in the process of starting a comprehensive offensive to retake Mosul, Iraq's second-largest city, from ISIS by this summer. The exiled governor of Mosul, Atheel al-Nujaifi, claimed on March 1 that Turkey will take part in the offensive. Additionally, the Iraqi Kurdish online news website Rudaw, al-Nujaifi said that Turkey has agreed to send weapons and supplies to recapture Mosul, which has been under the control of ISIS since June.

Yılmaz paid an official visit to Iraq on Wednesday along with officials from the Ministry of Foreign Affairs and the Turkish Armed Forces, and the defense minister was scheduled to meet Iraqi defense and interior figures. Despite the claims, sources close to the government state that Turkey will not put boots on the ground in Iraq nor send weapons to its southern neighbor, but will assist the anti-ISIS fight in other ways.