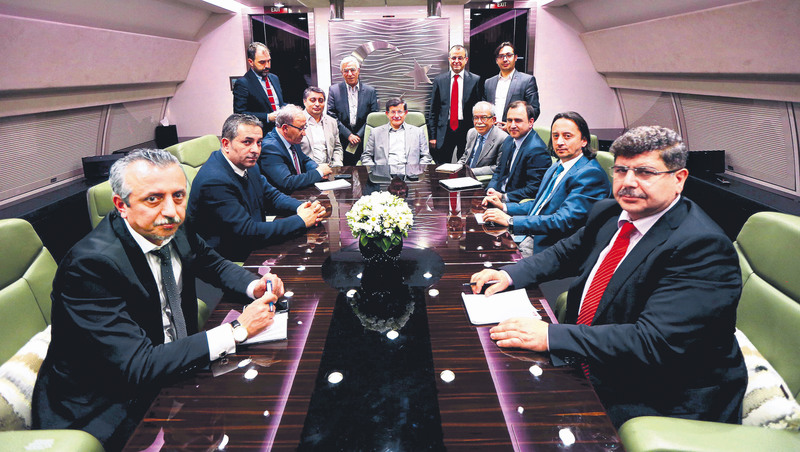 Prime Minister Ahmet Davutoğlu, speaking to journalists accompanying him during his six-day Portugal and U.S. tour, said early yesterday that he would explain to foreign investors how political stability in Turkey has resulted in the past decade's economic dynamism, and that the government's incentive packages are aimed at fostering an environment suitable to attracting investment and spurring growth.

The government is determined to promote Turkey's investment potential, he said, adding, "We were in London on January 20-21. Now, we will go to New York to promote Turkey to investors from around the globe." Speaking before the start of the U.S. leg of the tour, Davutoğlu said: "The Portuguese prime minister [Pedro Passos Coelho], with whom I talked today [Tuesday], said they had stimulated the economy and then added that the expected growth rate this year is 1 percent. The European economy is seriously weak. We will explain to investors in the U.S. the state of the Turkish economy and that we expect them to invest in both the finance sector and the real economy."

He dismissed claims that there was a serious divide in Turkey on interest rate policy, noting that interest rate policy was a topic of serious debate in much of the world. "There is a debate among G20 countries about Germany's inflation-focused economic model and the U.S.'s model that prioritizes development and investment. The same matter is and should be discussed in Turkey, which aims at lowering inflation while spurring growth. It is wrong to view the discussion on rates as a polarizing issue. Turkey needs a more integrated economic policy," he said.

Problems within the agriculture sector caused the Central Bank to miss its inflation target, said the prime minister, adding that rates could not be the sole factor in formulating policies or judging the state of the economy.

Political stability in Turkey is of paramount importance, said Davutoğlu, noting the huge political changes in the past year, including changes in the prime ministry and the presidency, but said that the process was handled deftly. "If the change had been painful, interest rates would have skyrocketed," he argued.

He said the government was creating a suitable environment in Turkey for direct foreign investment. "Global capital is constantly seeking the best environment for investment. We are telling investors that we are a very appealing investment destination. We want the top R&D companies to invest in Turkey. We have very attractive incentives for Research and Development," he said.

He underlined the importance of optimizing economic priorities that at first glance seemed contradictory, adding, "This is why politicians are there. I'm very optimistic. Our energy outlay is decreasing." He said Turkey would be the country that would benefit most from the European Central Bank's monetary easing, and explained that the government was trying to attract Japan's excess reserves.
Last Update: Mar 05, 2015 9:57 am
RELATED TOPICS