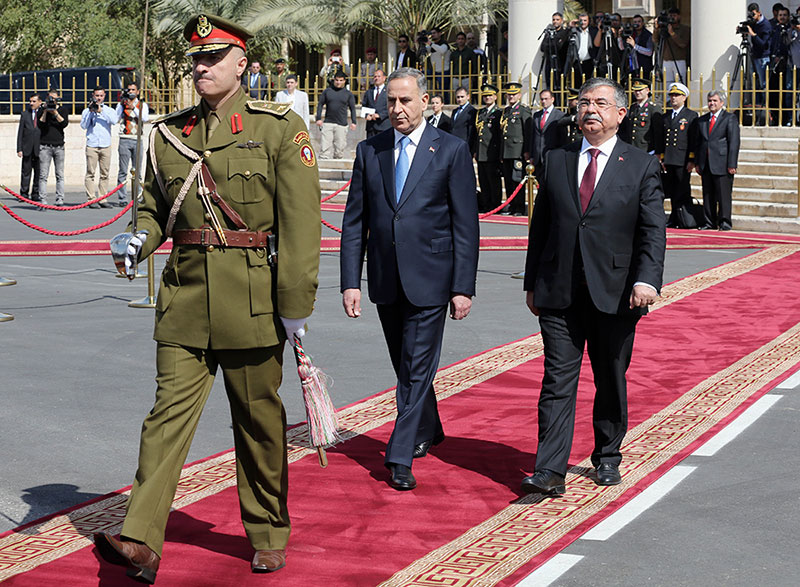 by Anadolu Agency Mar 05, 2015 12:00 am
Turkey is ready to train the Iraqi army, Turkish defense minister has told the Iraqi authorities during an official visit to Baghdad.

"We told them [the Iraqi authorities] that the same applications can be applied also to the Iraqi armed forces", Yılmaz told The Anadolu Agency in an exclusive interview Thursday.

Iraq's stability means stability for Turkey too, Yilmaz said, adding, "If there will be peace in this country [Iraq], Turkey will primarily benefit from this."

The minister said that Turkey supports the territorial integrity and sovereignty of Iraq.

"This is a difficult period for Iraq," Yilmaz said, as the self-proclaimed Islamic State of Iraq and al-Sham (ISIS) controls one-third of the country.

"In this difficult period, we will stand by the Iraqi government and people in the legitimate struggle against terrorism," he said.

Yılmaz said that Turkey had reached an agreement with Iraq to create a joint military technical committee in order to meet the needs of the Iraqi army as soon as possible.

The Iraqi army and Kurdish forces, in cooperation with local Shiite and Sunni militias, are waiting to initiate a major offensive against ISIS in the coming weeks to take control of Mosul, Iraq's second-largest city.

Yılmaz said that his Iraqi counterpart Halit el-Ubeydi had told him that when the Mosul operation starts, about a million people will be forced to leave their homes and go towards northern Iraq.

"He requested Turkey's humanitarian aid for those that will be forced to be replaced inside Iraq," Yılmaz said, adding: "We clearly stated that we will offer our help."

Iraqi security forces backed by Shiite militias launched a ground offensive against ISIS on Monday to recapture Tikrit city, aiming to approach the rebel group's stronghold of Mosul. Tikrit, a Sunni-majority city, was the homeland of the deceased Iraqi leader Saddam Hussein.

Speaking about Turkmens, Yılmaz said that Turkey has done more than any other country for them. "Our Turkmen brothers have been affected the most from the ISIS terror organization's attacks," Yilmaz said.

Yılmaz said that in all meetings regarding national security the Turkish government has taken important decisions on helping Turkmens in Iraq.