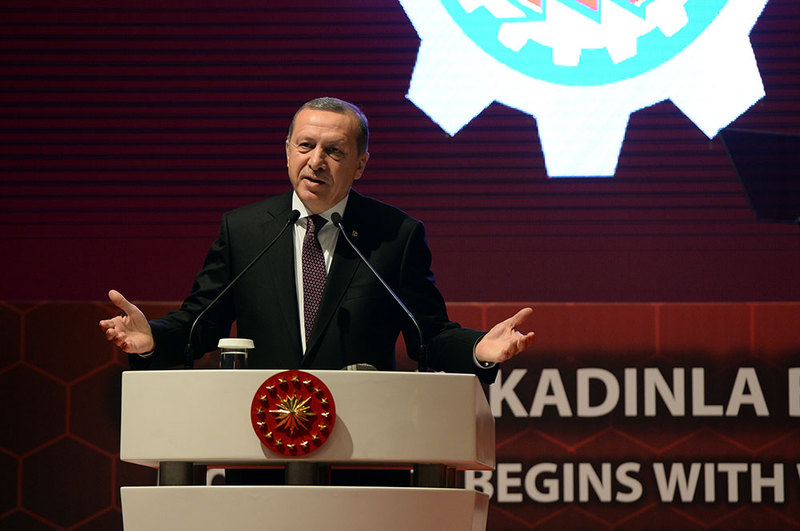 Only two days ahead of International Women’s Day, President Erdoğan accused Western countries of turning a blind eye to the ordeal of refugee women, while the WFP announced a cut in aid to refugee camps due to a lack of funds

President Recep Tayyip Erdoğan, in a speech at a meeting of female workers of the Turk Metal Labor Union in Ankara on Friday, called on the world to take sides with nearly 2 million refugees fleeing the chaotic atmosphere in Syria and Iraq.

Touching on the difficulties refugee women have faced since the beginning of the Syrian civil war, Erdoğan criticized other countries of talking a lot about women's rights but doing nothing when it comes to Syrian and Iraqi refugee women, whom he described as the true victims of the catastrophe in their own countries.

His criticism came only two days before March 8, International Women's Day, as the world gets ready to celebrate, and the crisis in Syria enters its fifth year.

"What have [Western countries] done for the rights of 2 million Syrian and Iraqi people sheltering in Turkey?" Erdoğan asked, adding that even though the West praises Turkey's support of the refugees, the number of refugees who have been given shelter there is only 150,000.

Pointing to the first lady, Emine Erdoğan's visit to the Suruç refugee camp in the southeastern city of Şanlıurfa on March 5, Erdoğan touched on the suffering of the refugees who are away from their homes.

On the same day that he called on the world to extend a helping hand to refugees, the U.N. food agency announced that it had to reduce its aid to nine Syrian refugee camps located in Turkey, due to a lack of funds, as it called for additional funding for the refugees.

"Unfortunately, in February, we were forced to ask the Turkish government to take over assistance in nine camps where we could not continue providing aid because we lack funds," said World Food Program (WFP) spokeswoman Elisabeth Byrs at a press briefing in Geneva.

Underscoring that the WFP's deficit in the 2015 aid program in Turkey is $71 million and that it needs $9 million each month to deliver food aid to Syrian refugees in the country, Byrs called for more funding.

She said that the agency has been supporting 220,000 refugees in Turkey each month, and planned to reach 300,000 in 2015, but last month it had to reduce the number of people who benefit from the organization's aid to 154,000. Noting that the Turkish government stepped in to close the funding gap, Byrs urged other donors to provide assistance as Turkey has taken in nearly 2 million refugees since the beginning of Syrian civil war.

Similarly, in his speech on Friday Erdoğan said that the support given by the West for the refugees in Turkey is around $250 million, while Turkey has spent nearly $5.5 billion.

Western countries' policies toward the refugees have come under criticism since Turkey has applied a humanitarian-based, open-door policy toward refugees in an attempt to shelter war-torn Syrians and Iraqis. Due to the Islamic State of Iraq and al-Sham (ISIS) threat that is only a few kilometers away from the Turkish border and the continuously increasing number of refugees on Turkish territory, the government has asked for more assistance from Western countries and the U.N.

The president said that any country that did not value human life is not a powerful country and added that only those countries that give value to human life can be described as powerful.

"While fighting against discrimination on one side, people's right to live is being violated," he added.

Touching on Turkish women's rights, he said that there is positive discrimination for women in working life in the country.

In reference to Prime Minister Ahmet Davutoğlu's announcement of new incentives for working women on Jan. 8, the president said that children are not obstacles to working, and Ankara will never allow employers to prevent working mothers from fulfilling their maternal duties.

He said that the government would support entrepreneurial women who want to launch their own business with incentives and loans.
He further strongly condemned violence against women, pointing out that the murder of Özgecan Aslan, a 20-year-old Turkish student in the southeastern province of Mersin, had aroused huge indignation across the country.

He also expressed his hope to see more women deputies in Parliament after the June 7 general elections.