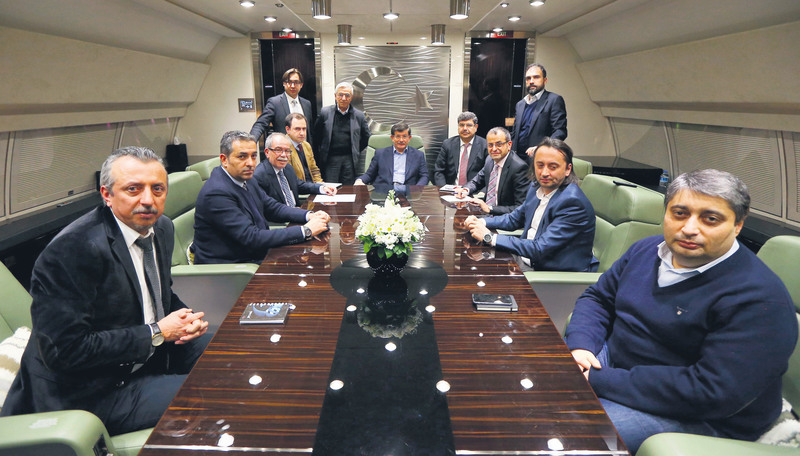 by Serdar Karagöz Mar 08, 2015 12:00 am
Prime Minister Ahmet Davutoğlu, speaking late on Saturday during his return flight to Turkey from his successful U.S. visit where he met with top global investors, said many were positively surprised by the pro-business policies implemented by the government and pledged to increase capital flow to Turkey. Speaking to journalists accompanying him, he said the government had announced a very detailed economic program and that foreign investors had to be told about its details. "We wanted to talk about our program. My trips to London, Davos and New York in the past three months were planned in advance for this purpose." The meetings with Goldman Sachs, City Group, Merrill Lynch and about a dozen other giant investment companies with significant investments in Turkey had produced very encouraging results, he said, adding that he had especially underlined the importance of investments in research and development.

Davutoğlu said the Turkish delegation had met with representatives from real and finance sectors and no one had asked them about the recent depreciation of the Turkish lira against the dollar. "Everyone around the world knows the appreciation of the dollar is a global phenomenon. We are closely watching the developments concerning the exchange rate. We will also discuss the matter and possible precautions that can be taken with the Central Bank chairman," he said.

Davutoğlu said Turkey was influenced by a development affecting the entire world but no one could deny that Turkish economy was sound and strong. "We are one of the best in terms of budget deficit, which currently stands at 0.7 percent of the GDP. In the coming years, we will post budget surpluses. The banking sector is strong. Foreign trade deficit is in a downward trajectory. It has dropped from $64 billion to $48 billion. All figures prove that the Turkish economy is in a strong state."

He said he had spoken to many important economists during his U.S. visit and they had told him that all the parameters showed it was impossible for Turkey to face a crisis. Many experts had praised Turkey's political stability, he said, adding, "If that had not been the case, Turkey wouldn't have gone through huge changes, such as changes in the presidency and the prime ministry, so smoothly."

The prime minister said there was a broad propaganda campaign against Turkey overseas, aiming to turn back the huge advances made by the country. "For example, the head of a very large company asked me about the state of women in Turkey, noting that he was hearing conflicting stories. When I told him about the policies we are implementing to increase female employment and address problems faced by women, he was surprised, telling me he had no idea. This proves there is a misinformation campaign targeting Turkey."

He also said he was asked some questions about the Turkish Central Bank. "However, European leaders also talk about their central banks. Some in Turkey try to give the impression that no one can talk about the central bank. In democratic societies, every institution can be criticized. Every issue needs to be discussed."

Speaking about his harsh criticisms directed at the world community for their failure to address the crisis in Syria, Davutoğlu said the matter had long become much more than Syria and was now currently posing a huge threat to regional stability. "The international community wanted regional countries to handle it, ignoring the chaos in the country. With the attack in Paris and other recent developments, everyone knows that if the Syria issue is not resolved, it will create significant trouble in Europe and the rest of the world. Their focus now is, 'Where did we do wrong?' They are talking about plan B, as if they had a plan A."

When asked about how the debate on the presidential system in Turkey was viewed in the U.S., Davutoğlu said, "The decision-making mechanism in Turkey was one of the topics discussed. I told them about the problems caused by the current Constitution, which was prepared after the September 12, 1980 military coup. This Constitution will be changed and the new one's tenets should be constructed on a sound foundation. The matter should not be discussed over a parliamentary or presidential system. Turkey never had a proper parliamentary system. The September 12 Constitution was prepared in such a way to limit the authority of the representatives of the people. The president, with the assumption that he or she would always be representative of the state bureaucracy or the military, was given significant amount of authority without any responsibility. The system itself is problematic. The new constitution needs to focus on the people and has to be based on human rights. A presidential system with effective checks and balances can be built with such a constitution."

When asked why his first trip to the U.S. as the prime minister did not involve any meetings with the U.S. administration, Davutoğlu said the tour, which was planned in advance, was solely to explain Turkey's economic program to investors. He had not requested any meetings with representatives of the U.S. government because the trip had no political purpose, he said.

The prime minister said the recent spate of claims about the closure of the CHP and MHP and the HDP's possible failure to pass the 10 percent election threshold was part of a propaganda campaign to portray Turkey as becoming more authoritarian.

"Can such things happen? Such claims have no legal basis. If an attempt was made to shut down the CHP or MHP, we as the AK Party would be the first to oppose it. However, the CHP should first answer this question. If you were so against the closure of parties, why didn't you support the bill that would have banned such actions before the 2010 referendum? The CHP's objective is to support the closure of other parties so they can become the government. Our stance is to ban closure of all parties. It is impossible to shut down a party in new Turkey. I call on all four parties in Parliament to help us submit a joint bill next week banning the closure of parties so that we can end such speculations once and for all."

He said such claims were part of a propaganda campaign, which had succeeded in clouding the agenda. "I talked to foreign investors and their Turkey analysts when I was in the U.S. I asked them, 'You follow Turkey closely. Can you tell me what happened last weekend?' They debated among themselves and none could come up with the correct story. Last weekend, a disarmament call that will end 30 years of bloodshed was made. I asked them how they could not be aware of such a development. They take every statement into account while analyzing Turkey but an announcement that will end this bloodshed does not register on their radar. Similar announcements in Colombia and Sri Lanka were top stories. Why didn't this announcement make it to the top of the world agenda? They ignore this, but know about nonsensical claims made about the CHP."

He said the announcement had improved Turkey's investment security. "The stability produced by this announcement will lift the economy. Our estimates show that Turkey spent $500 billion on defense because of this matter. Investors had no idea. Did the prime minister of Turkey have to go to New York to tell them? The international media chooses to ignore such developments. Why?"

Concerning the debate over former President Abdullah Gül's candidacy in the coming parliamentary elections, Davutoğlu said the ruling AK Party was a political movement following long-term objectives and values and was above short-term political ambitions of individuals. "If principles, rules and norms are sound, people may come and go but these tenets stay. One of the values I treasure the most is loyalty. Abdullah Gül is the founder of our party. And, he is not just an ordinary founder. He is the AK Party's first prime minister. He is also the first president elected by our party with the full support of our current president."

He said there were examples in Europe of former presidents continuing their political careers as deputies but at the end of the day, it was up to Gül to decide whether he wanted to become a deputy. "It is not up to us to decide whether this is appropriate or not. An invitation is given to an outsider. This is his party," said the prime minister.

He said there had been a public invitation to Gül to become a parliamentary candidate. He said he knew Gül since the early 1980s and their friendship was strong. "I believe relationships within the AK Party are based on sincerity and mutual trust and would not be hurt by differences of opinion. I'm reading some stories about how I would be uncomfortable if Gül returned. Such behavior is foreign to us. No such thing can occur between Gül, Erdoğan or I," he said. He said as soon as Erdoğan had said that the former president was welcome to run for Parliament, there was a great outpouring of support for Gül. When asked if Gül could be the parliamentary speaker, Davutoğlu said Gül would do an outstanding job as the speaker but Gül's decision was paramount.

Davutoğlu dismissed claims that almost half of the people who lodged applications at Justice and Development Party (AK Party) to become candidates in the general elections in June were members of the anti-government Gülen Movement. "Anyone can lodge an application to become a parliamentary candidate. It's a democratic right. However, it is the party's right to choose its candidates. The party that is the most institutional when it comes to selecting candidates is the AK Party. The party holds surveys," he said, adding that Gülen Movement members could not pass through this process. He said applicants also had to be approved by commissions to become candidates, adding that no one should be worried about Gülenists making it through this detailed process.

"Also, I believe the movement is seeking a place for itself within the CHP [the Republican People's Party], HDP [the Peoples' Democratic Party] and MHP [the Nationalist Movement Party]. All three have ties to the Gülen Movement. The group's plan is for the CHP to get 35 percent of the votes, followed by 10 percent for the HDP. You can also add the MHP to the mix. This is their plan and [CHP leader Kemal] Kılıçdaroğlu fell for it."