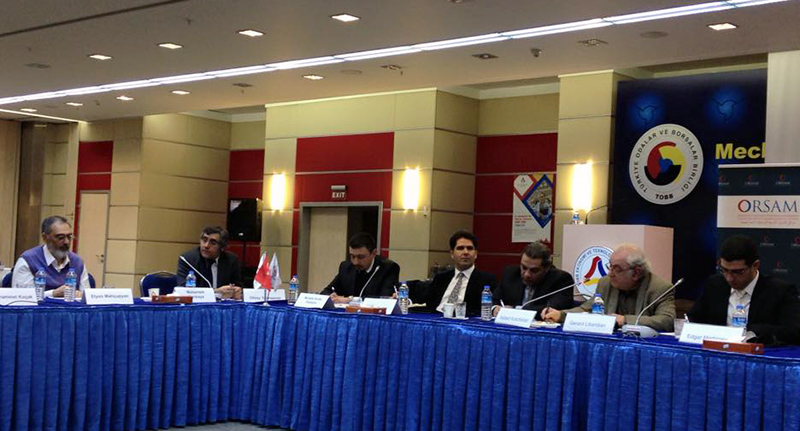 by Merve Aydoğan Mar 09, 2015 12:00 am
As the 100th year commemorations of the 1915 events approach, the foreign policy department of Turkish Economic and Social Studies Foundation (TESEV), the Center for Middle Eastern Strategic Studies (ORSAM) and TOBB University of Economics and Technology (ETÜ) organized a round table meeting on Friday March 6 at TOBB University. The meeting discussed the Armenian diaspora and relations with Turkey with the participation of Gerard Libaridian, a historian who served as senior advisor to Levon Ter-Petrossian, the first president of Armenia, between 1991 and 1997; Asbed Kotchikian, a lecturer in political science at Bentley University and an expert in Eurasian and Middle Eastern politics and Edgar Martirosyan, a lawyer and member of the board of directors at the Analysis Research & Planning for Armenia Institute (ARPA). Alongside the notable Armenian figures, the meeting hosted a number of significant figures such as Etyen Mahçupyan, who is an Armenian-Turkish columnist and writer and the senior adviser to Prime Minister Ahmet Davutoğlu; former diplomats Ömer Ersun and Ertan Tezgör, and Prime Ministry adviser Sevinç Alkan Özcan were among the many significant attendees.

Aybars Görgülü, who is the program officer at the Foreign Policy Program of TESEV, began the meeting by making significant statements related to Turkish-Armenian relations. Görgülü said that the relations do not display a bright future with the current progress. In this regard, the round table meeting at TOBB University discussed and evaluated the role of the Armenian diaspora and the bilateral expectation of the two countries. Commenting on the concept of the Armenian diaspora, Kotchikian said: "The biggest problem is defining the numbers of the diaspora, as it is highly difficult to do so." He also added: "There is no one entity that can speak on behalf of everyone, which brings more flexible approaches to the issue."

Commenting on Turkish-Armenian relations, Martirosyan said: "Particularly the relations between Turkey and the Armenian diaspora are often described with misconceptions, false perceptions and ill-communicated expectations. If Turkey is looking for a partner to engage with the diaspora it will not find one, but it can find one in different sources. Thus, the main idea in this is to look for all or look for none because there is no one, or even some, that can be considered as equally representative of all." He continued by saying that if both sides cannot properly communicate then it will only lead to further alienation.

In regard to defining the Armenian diaspora, Libaridian agreed with other participants that one must realize it is dynamic. He further continued: "It is true that the genocide has been instrumentalized and there are politicians who use it as a tool." Additionally, Libaridian finalized his statement by commenting on the role of the Turkish government and said that when he was serving as a senior adviser in the 1990s he told former ambassador Ersun that the Turkish state had to decide whether it was part of the solution or the problem, which resulted in no outcome.

While President Recep Tayyip Erdoğan highlighted during his official visit to Colombia in early February that Turkey is ready for a constructive and objective approach to resolve the tensions between Armenia and Turkey due to the 1915 incidents, he also added that the Armenian leaders ha rejected Turkey's invitation to attend the ceremony organized in Çanakkale to commemorate the 100th anniversary of the Battle of Gallipoli. Erdoğan said that their offensive statements closed the doors of dialogue once again.

The 1915 events occurred during World War I when a segment of Armenians living in the Ottoman Empire supported a Russian invasion and revolted against the empire and were relocated to eastern Anatolia. While Turkey refrains from using the term "genocide" to refer to the incident, as many Turks also lost their lives due to attacks carried out by Armenians in Anatolia, the Armenian state and diaspora are campaigning for the incidents to be recognized as genocide.

Erdoğan issued a letter expressing condolences for the 1915 events on April 23, 2014, which was unprecedented in Turkey's history. In the letter, he urged for the establishment of a joint historical commission to investigate the events and called on Armenia to open their archives as Turkey has done.