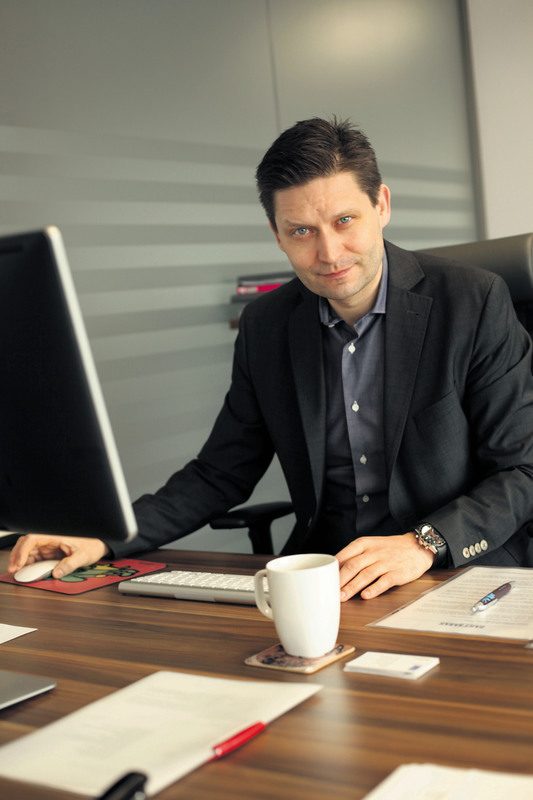 Turkey's state-run aid agency AFAD and the UNDP are in collaboration to help build a disaster-resilient society and mitigate the impact of the Syrian crisis, said UNDP's Istanbul manager Rastislav Vrbensky

In 2014, the United Nations Development Programme (UNDP) relocated its Europe and Central Asia regional hub from Bratislava, Slovakia's capital, to Istanbul. Focusing on poverty reduction, energy and environment and social development, UNDP's Istanbul Regional Hub now operates within a framework that covers 22 countries in the Eurasia region and Turkey is among the countries in which the project carries high-level cooperation, as the Manager of the UNDP Istanbul Regional Hub, Rastislav Vrbensky, said. In an exclusive interview with Daily Sabah, Vrbensky discussed the importance of fighting poverty, reducing the risks of disasters and climate change. He also expressed appreciation for the work of the Prime Ministry's Disaster and Emergency Management Authority (AFAD) in cooperation with the institution, and said it UNDP is seeking more closely concerted action to change people's life in the region.

Daily Sabah: Could you please tell us about the UNDP Istanbul Regional Hub?

Rastislav Vrbensky: UNDP's Istanbul Regional Hub was established with the strong support of the Turkish Government. We enjoy excellent cooperation with the government and we look forward to working together even more closely to achieve concrete and transformative change in the lives of the people of the region. The Istanbul Regional Hub covers 22 countries and territories, and 12 of these countries were formerly part of the Soviet Union. The region also covers Turkey, Cyprus and a number of countries and territories in the Balkans. The UNDP Istanbul Regional Hub provides support to its offices across the region in terms of programing, policy advice and project implementation. The Istanbul Regional Hub also covers the areas of sustainable development, governance and peace-building, energy, disaster resilience and climate change. We also work across thematic areas on gender, health, partnership building and knowledge and innovation.

DS: Last year, UNDP decided to move its regional hub from Bratislava to Istanbul. What were the motives behind this decision?

RV: First of all, the excellent geographic location of Istanbul's facilitates and better connections with our regional program countries. A very important benefit comes from UNDP's co-location in Istanbul with key U.N. partners, including U.N. Women and UNFPA, the population fund of the U.N. This improves coordination and organization within the U.N. development system. Furthermore, the government and UNDP share a mutual aim to improve the lives of people living in the region. We will draw on the government's commitment to sharing its knowledge and experience in development across the globe. This will include strengthening the role of the private sector in development, in such areas as agribusiness and tourism, as well as potential initiatives to support women's economic empowerment. In fact, Turkey also hosts the Istanbul International Center for Private Sector in Development (IICPSD). This center is UNDP's global policy center, which supports the development of inclusive and competitive markets and inclusive business models. IICPSD builds on Turkey's convening power and dynamic private sector as well as UNDP's global mandate to engage the private sector constructively in supporting global and local efforts to address development challenges. We share a joint commitment of contributing to the global efforts to define and shape a new post-2015 development agenda. We will jointly advance efforts to promote south-south cooperation and share Turkey's important development experience with countries around the world, including in the area of disaster risk and response. Our strategic partnership recognizes the increasing role and engagement of Turkey and other emerging economies in shaping and contributing to global development issues.

A changing climate and rapidly growing exposure to disaster risk presents the world with an unprecedented challenge. For developing countries, both those less able to cope with the impact and those more likely to be affected, the challenge is particularly severe. These countries face mounting losses from a range of natural hazards – from earthquakes and severe flooding, to storms and drought – as well as a climate threat that impacts agriculture, health and energy and water resources. Decades of development progress hang in the balance and could very well be rolled back. So yes, climate change and disaster risk reduction go hand-in-hand. The volatility and unpredictability of a changing climate threatens to increase both the frequency and severity of disasters. National and local efforts to adapt to or mitigate the effects of climate change must also prepare for possible disaster scenarios. UNDP is ahead of the curve in this regard and has brought its climate change and disaster risk reduction teams together to amplify and align country level support. The UNDP Strategic Plan 2014-2017 calls for initiatives that help to prepare for and deal with the consequences of natural disasters, especially as they are exacerbated by climate change.

DS: What are the areas of cooperation between UNDP and AFAD?

Disaster risk reduction is one of the areas of cooperation in the Partnership Framework Agreement signed between UNDP and the government in 2011. Last year in Ankara, UNDP and the government signed a cooperation protocol to strengthen collaboration and coordination on disaster risk reduction. Disaster risk reduction is an important development challenge for Turkey because since 1950, almost 34,000 people have lost their lives due to earthquakes. Furthermore, economic losses caused by disasters in the last 60 years correspond to 3 percent of the country's gross national product (GNP). Like UNDP, AFAD also aims at "building a disaster-resilient society" as stated in their strategic plan. Therefore, the cooperation between AFAD and UNDP aims to establish stronger systems and capacities for risk-related and integrated disaster management at the sub-national level and by working with local communities. Raising awareness and education are also important elements to supporting and improving integrated disaster and emergency response. UNDP and AFAD also cooperate regarding the impact of the Syrian crisis, focusing on the service delivery capacity of local actors, including municipalities, as well as recovery of the impacted communities.

DS: As you know in 2005 at the World Conference on Disaster Risk Reduction, 168 countries adopted the Hyogo Framework for Action (HFA) 2005-2015. In 2015, UNDP will launch a new program in support of the HFA. Can you elaborate on it?

In 2015, UNDP will launch a new program in support of the second Hyogo Framework for Action (HFA2). As part of its mandate and commitment to support member states to prevent, mitigate and prepare for disasters, UNDP is currently developing a multi-country program targeting 50 countries over 10 years through five priority components. The new program will be based on the outcome of the negotiations on the new global Disaster Risk Reduction Framework. UNDP's proposed approach includes working in partnership with multiple stakeholders from across all sectors and levels. Country-specific work will be customized and flexible, and UNDP will conceptualize and support risk reduction across a range of contexts.

Eradication of poverty and achieving sustainable development are the main priorities of UNDP. What is the impact of disasters for achieving these goals?

We can never eradicate poverty or achieve sustainable development as long as disasters continue to devastate countries and communities. Disasters have cost the global economy at least 2 trillion dollars in the last 20 years, claiming the lives of over 1.3 million and affecting over 4 billion in the process.

There is a direct link between poverty and disasters: poorer communities are generally less protected and subsequently more impacted by disasters. Therefore, there is direct connection between disaster risk reduction and poverty eradication. Disaster risk reduction offers a means of protection for development gains and economic investments.

In the Europe and CIS region, 316 Disasters occurred between 2005 and 2014. More than 60 thousand people were killed by disasters. More than 11 million people were affected by disasters. And at the same period, the total damage from disasters was more than 25 billion dollars. This is obviously a critical setback for any development agenda.

From this perspective what is your expectations from the third UN World Conference on Disaster Risk Reduction that will be held from 14 to 18 March 2015 in Sendai, Japan?

The new global Disaster Risk Reduction framework is well informed by a number of regional consultations of member states, starting from 2013. Our regional consultation covering Central Asia and South Caucasus took place last year in Almaty. The Disaster Risk Reduction framework is also informed by the Global Assessment Report regarding existing risks that will be launched during the conference.

The outcome of this year's meeting is on deeper integration of Disaster Risk Reduction into traditional development paths. For the first time, we talk about Disaster Risk Reduction indicators as part of the upcoming Sustainable Development Goals. UNDP led the preparation and negotiation of the UN system wide Plan for Action on disaster risk reduction for resilience in 2014.

Can you draw us a picture about UNDP's commitment and resources related to Disaster Risk Reduction (DRR) area?

UNDP's work in this area is to integrate issues of climate, disaster risk and energy at the country level. We focus on building resilience and ensuring that development remains risk-informed and sustainable. Specifically, UNDP's Strategic Plan calls for data, policies and capacities for comprehensive country level and regional action on natural disasters, to minimize adverse development impacts and accelerate rebuilding.

A major focus of UNDP's Strategic Plan in this area centres on what happens before disasters strike. This includes support across a range of issues: disaster risk assessment looking, for example, at geophysical, weather and climatic and other hazards; policies and long-term planning and investment frameworks that are disaster risk-sensitive, integrating disaster risk reduction with adaptation to climate change; and preparedness for disaster management and recovery at the sub-national and national levels, including innovation to manage risks through insurance and resilient infrastructure.

The other major focus of our work is what happens after disasters strike. This addresses post-disaster planning for recovery and preparation of recovery and reconstruction plans and programmes that are inclusive of and accountable to displaced populations, women and other excluded groups.

In the 10 years since the launch of the Hyogo Framework for Action (HFA) in 2005, UNDP has invested roughly 1.7 dollars in more than 160 countries in building capacity to effectively prevent, prepare for and recover from disasters. The expenditure is dominated by the Asia Pacific Region with 922 million dollars. This is followed by Latin America and the Caribbean with 277 million dollars and Africa with 266 million dollars.

In our region, UNDP has been a strong supporter of Disaster Risk Reduction issues. The total UNDP core funding contribution from 2005 to 2014 in Europe CIS region on Disaster Risk Reduction is over 80 million dollars. However, UNDP funds are normally catalytic and serve to mobilize additional resources, which in ECIS for the past 10 years is around 270 million dollars.