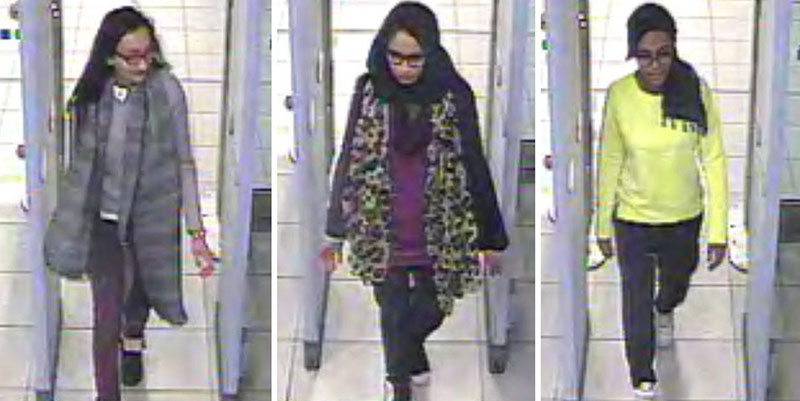 Foreign Minister Mevlüt Çavuşoğlu said that an intelligence agent from a country that is a member of the anti-ISIS coalition had helped the three British girls join the group in Syria. While Foreign Ministry officials refused to comment on the nationality of the agent, security forces reached by Daily Sabah found the agent is suspected to be a spy working for Canada

Turkey's Foreign Minister Mevlüt Çavuşoğlu revealed on Thursday that a member of a foreign intelligence service that actively took part in the coalition against the Islamic State of Iraq and al-Sham (ISIS) aided three British girls in joining ISIS in Syria. Çavuşoğlu declined to name the country while sources, with close ties to the government, speaking exclusively to Daily Sabah stated that the suspect might not be a Canadian citizen but confirmed that he or she was working for the Canadian intelligence agency.

He was speaking on Turkey's A Haber channel on Thursday about the flow of foreign fighters to Syria through Turkey when he said: "We were informed by Britain about three girls who left to join ISIS a few days after they departed for Turkey. It turned out someone helped them and [that person] was captured. This person was working for the intelligence service of a country participating in the coalition against ISIS. This country is not the United States or a member of the European Union. I told this to the British foreign secretary (Philip Hammond) and he replied 'as usual.'"

Foreign Ministry sources said that the person is currently in detention and an investigation is continuing. They said that the unidentified intelligence agent was not a citizen of "the coalition member country." It was said that the unspecified country was contacted on the matter.

Neither the minister nor any other government official would name the country in question, however, sources close to the government said the person was a member of Canada's intelligence agency.

Apart from the U.S. and EU countries, Canada, Australia, Gulf countries and several other Arab countries are taking part in efforts to wipe out the ISIS presence in Syria through airstrikes. The Canadian embassy in Turkey declined to comment on the issue. Canada's Department of Foreign Affairs, Trade and Development had no immediate comment as of press time either.

Canada's office of Public Safety Minister Steven Blaney, the federal minister responsible for the Canadian intelligence agency, issued a brief statement. "We are aware of these reports," said Blaney's office. "We do not comment on operational matters of national security."

The Prime Ministry's Office of Public Diplomacy also released a statement on the matter, commenting on Çavuşoğlu's remarks. The statement said that capture of the intelligence officer "showcased a complex problem involving intelligence wars. This incident should be a message to those always blaming Turkey on the debate on the flow of foreign terrorist fighters, and shows it is a problem more complicated than a mere border security issue. Turkey will continue its call for stronger intelligence sharing, and is worried about the lack of intelligence sharing in a matter involving the lives of three young girls," the statement said.

Çavuşoğlu said countries should review their laws and measures to curb the flow of foreign fighters. Mentioning the existence of U.N. resolutions to that extent, he said countries should exert more efforts on investigating how these people became radicalized rather than simply resorting to security measures and said the fight against terrorism, racism and xenophobia should be carried out together.

The case of Shamima Begum, 15, Amira Abase, 15, and Kadiza Sultana, 16, the three British girls who left their London homes in early February, became a point of contention between the U.K. and Turkey. Seeking to dodge responsibility, British police had claimed they notified Turkish authorities immediately after the girls arrived in Istanbul while Turkish officials said the notice came three days later. British Prime Minister David Cameron had blamed Turkish Airlines, the country's national carrier, for allowing the girls to board the flight to Istanbul. The three teenage girls then headed to the country's lengthy border with Syria to join ISIS. The carrier responded with a statement, pointing out that it was the British security forces' task to screen travelers and the girls boarding the flight was legal.

Turkey's Ambassador to the U.K. Abdurrahman Bilgiç was invited to the House of Commons to speak about the incident on Tuesday. He said the girls could be followed and apprehended by Turkish authorities if they were informed beforehand by their British counterparts.

"I think the primary obligation is on the shoulders of the source country because they should be stopped at the source country before exiting the country. [There is] enormous pressure on the shoulders of Turkey. Our neighborhood is not a rose garden. So if we had timely info and detailed info before their arrival then it is of course easy for us to track," Bilgiç told the Home Affairs Committee at the House of Commons.

British police have also been accused of failure to inform the families of the three girls properly. Police handed over letters to the girls, who attended the same school, seeking permission to allow their children to give a deposition regarding one of the girls' friends who left to join ISIS last year. Families said they would be more careful about their daughters' attempts to join ISIS if they were handed the letters instead of their children, as it was revealed that the girls hid the letters from their parents.