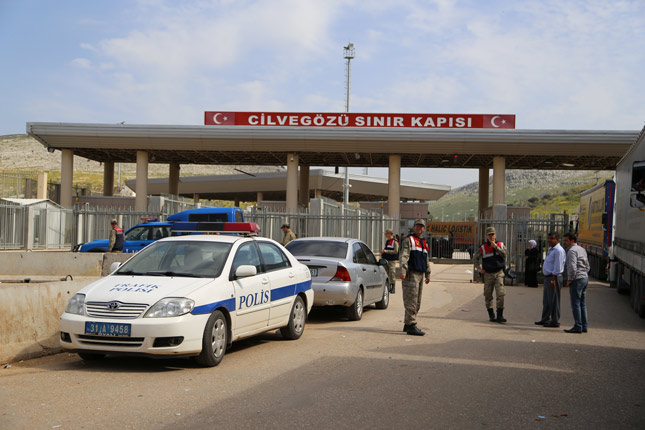 Acting on intelligence, Turkey has tightened security measures on two of its border gates with Syria to hamper any possible emergence of a security issue created by Syrian President Bashar Assad's government. According to intelligence received by Ankara, Assad aims to reciprocate Turkey's vigorous efforts in the coalition against the Islamic State of Iraq and al-Sham (ISIS) by creating chaos in Turkey ahead of the June elections. Assad will reportedly release imprisoned criminals in exchange for their cooperation in conducting attacks in Turkey. According to intelligence, the Assad government has considered Turkey a foe since it began supporting the Free Syrian Army, which has been fighting against the regime for the past four years, and has planned attacks on Turkish territory in retaliation for Turkey's sustained efforts to oust the regime. Assad will reportedly free imprisoned criminals who have been trained over the course of a year with the purpose of using them in the civil war to carry out a planned attack on Turkey. Assad's other target appears to be Syrian rebels, which have been backed by the Turkish government since the onset of the Syrian war and who have recently mustered further support from Western governments. Turkey, as a figure in the coalition against ISIS, which is led by the U.S, recently convinced the U.S. government that ISIS can only be effectively targeted by also removing the Assad regime.

Turkey and the U.S. have inked an agreement to train and equip the Free Syrian Army as well as Iraqi Kurdistan Regional Government (KRG) peshmerga forces, which has resulted in further unsettling the Assad government and fueling its anger toward the Turkish government.

Now, amid these developments and having received new intelligence, Turkey has tightened security of its borders with Syria on two of its border gates – Öncüpınar and Cilvegözü – on March 9 to counteract the intelligence claims. No crossing of people, goods or vehicles (except the ones with 'special permission') will be allowed until a second order is given. The Turkish Armed Forces (TSK) has been reportedly keeping all the entrance and exists under strict control.

The enhanced border security measures have been taken to protect against Assad's reported plan to free prisoners, who are estimated to number around 1,000, and have been tasked with infiltrating Turkey,posing as needy refugees. It is feared they plan to carry out an attack similar to the two 2013 bombings in Reyhanlı, a town in the southern province of Hatay which neighbors Syria, which killed 53 people. A further 146 people were injured in the attack and 20 suspects were arrested following the incident. There were allegations that those who launched the attack were part of an armed group attached to Syria's intelligence organization.

With this latest planned attack, according to intelligence, the Syrian regime is aiming to create turbulence in Turkey ahead of the upcoming elections. Some of the released prisoners will also reportedly be used in fighting against Syrian rebels.

The decision to take tighter security measures on the border gates came after Ankara received intelligence and discussed it at a high-level meeting at the Interior Ministry with the attendance of officials from the military and intelligence. During the meeting it was decided to increase security against the threat and take tighter measures on the border gates.

The issue was also brought up in the Cabinet meeting chaired by President Recep Tayyip Erdoğan that was held on March 9, the day that strict security measures were imposed along the border gates. The possibility of terrorist activities in Syria penetrating Turkey and the possible repercussions this would have on the elections were discussed during the meeting. A decision has also been made to hold a meeting about the establishment of "military safe zones" in the provinces that neighbor Syria.

Tensions have been running high in Syria, which first surfaced with the beginning of the civil war in 2011 and has continued with the rise of ISIS, which has taken control of parts of Syria and Iraq. The Assad regime, which has killed thousands of civilians in the war-torn country, is deemed by the Turkish government to be the main reason for the emergence and rise of the threat of ISIS in the region. These two lingering dangers in Syria and Iraq have forced thousands of refugees to avail themselves of shelter in neighboring states. Turkey, which has been taking the lead in hosting refugees, whose numbers now near 2 million, is vulnerable to possible infiltration, which has prompted the government to increase security at its borders.