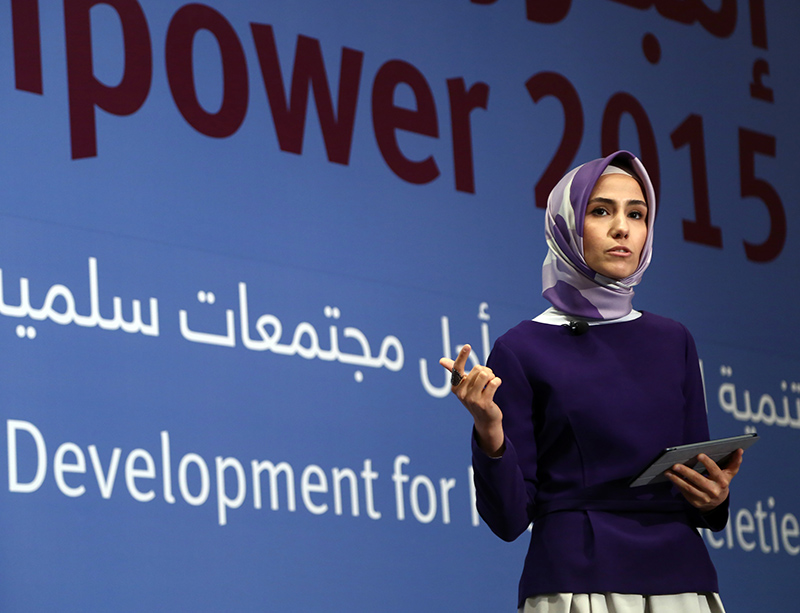 | Photo: AA
by Nurbanu Kızıl Mar 13, 2015 12:00 am
President Recep Tayyip Erdoğan's daughter Sümeyye Erdoğan said that understanding the definition of jihad solely as waging a war is wrong and that it should be understood instead as an inner –spiritual struggle- against one's desires.

Giving the opening speech at the Empower Youth Conference organized in the Qatari capital Doha on Thursday, Sümeyye Erdoğan not only described herself for the first time, but also touched upon a number of important issues including the definition of jihad and how it is taken out of context by some. She urged youth to be more skeptical about mainstream media and underlined that it is a form of terrorism to label all believers of a faith as terrorists.

"The meaning of jihad is to struggle" said the Turkish President's youngest daughter, who elaborated on the concept by saying that a director can engage in jihad by making a movie about presenting the real message of Islam. She argued the real meaning of jihad is the inner struggle within one's self against desires and that this can be done through striving to be productive and contribute to society.

Ms. Erdoğan made reference to the Prophet's remarks after he came back from the Battle of Uhud when he said "We have returned from the lesser jihad to the greater jihad" and when he was asked "What is the greater jihad?," he responded by saying, "It is the struggle against oneself." Erdoğan said that this was exactly what she was trying to explain.

Describing herself as the child of a generation who could not even dream about their future, Erdoğan said that the youth has the potential to overcome current issues in the region and should not find excuses to stay idle. She stated that motivation is necessary to take action and having ideals is necessary to be motivated while saying that ideals should not be shaped by popular culture but rather should be shaped by our beliefs and values.

"The domination of popularity kills the characteristics, features, diversity and uniqueness of humankind" Erdoğan told the audience, going on to express her frustration with this and adding that popularity is merely a tool used to serve the interests of a specific person or group.

Sümeyye Erdoğan called youth to be more skeptical and diversify the channels they receive information from. "Try to see the backdrop of the information you obtain" she said, adding that every writer, including journalists, intellectuals and academics are motivated by a certain agenda. She pointed out that objectivity is, unfortunately, a white lie. She also urged the youth not to allow developed countries in the West to lecture them about freedom of the press or academic objectivity.

"The West is professional when it comes to shaping and manipulating public opinion" she said, urging the audience to question everything that is mainstream and popular and go beyond such information channels to learn the truth.

Erdoğan also pointed out that criticizing mainstream media should not be understood as an excuse to radicalize while stating that terrorism is evil but that those who exploit the notion of terrorism to label a community of believers are also evil. She noted that when a Muslim commits a crime he/she is immediately labelled as a terrorist whereas when others commit similar crimes the issues are treated as criminal cases. "This is unacceptable and we do not approve of using expressions like terrorist and terrorism to be used side by side with Islam and Muslims" she said, adding that such a mindset is against principles of justice and international law.

The conference was attended by prominent figures including Sheikha Mayassa bint Hamad Al Thani, the chairwoman of Reach Out To Asia (ROTA); Ismail Emanet, the president of Turkish Youth Association (TUGVA) and representatives of non-governmental organizations from 23 countries.