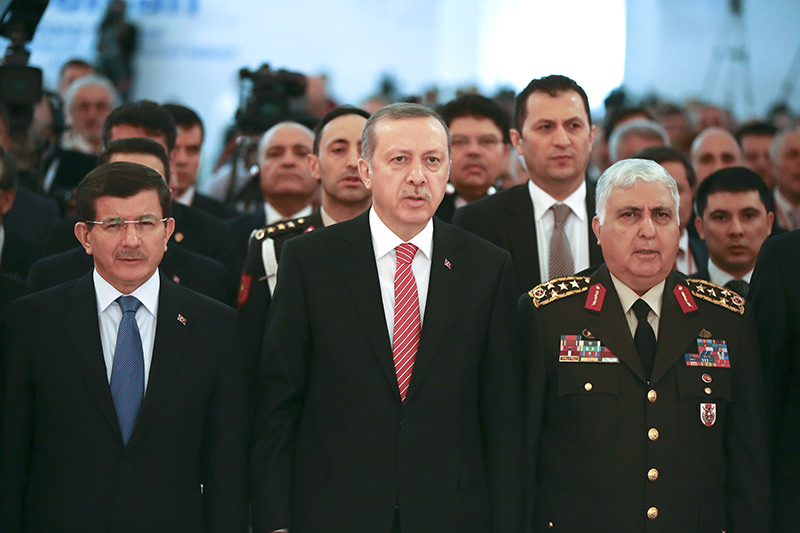 | Photo Credit: AA
by Daily Sabah with AA Mar 16, 2015 12:00 am
President Recep Tayyip Erdoğan said on Monday that Turkey would eliminate its dependency on external suppliers for its defense industry.

In a speech at the inauguration ceremony of the Radar and Electronic Warfare Technology Center, launched by Turkey's leading state-owned defense system producer, ASELSAN, in Ankara, Erdoğan said: "We plan to eliminate external dependency on defense equipment supply with ongoing projects and investments by 2023. We will not allow the use of any ready defense equipment without our being involved from design to production," Erdoğan said.

ASELSAN's $157 million new facility in Ankara's Gölbaşı district will employ more than 1,200 people, including 776 engineers, who will work on the development of radar and electronic warfare systems for land, air, sea, aerospace and unmanned platforms.

In his opening remarks, ASELSAN's board Chairman Hasan Canpolat said that the company ranked fourth among the fastest-growing companies in the defense industry worldwide. According to Canpolat, the company employs more than 30,000 engineers and collaborates with more than 24 leading universities in the region. Canpolat noted that with this new plant, Turkey's dependence on foreign resources for radar and electronic wartime systems will decrease, and Turkey will become one of the few countries that are capable of design and production in this field. He added that while ASELSAN continues to invest in research and development, technology and labor, and the company currently accounts for 34 percent of the Turkish defense industry's R&D activities as well as 4 percent of commercial R&D activities in Turkey.

Turkish defense producers aim at boosting exports to $25 billion by 2023 from $1.6 billion last year, according to the undersecretary for defense industries.

Ankara spent over $1 billion on defense, research and development in 2014.

Turkey's defense spending was TL 29.4 billion ($13.2 billion) this year, according to the Defense Ministry.

Turkey is currently negotiating a $3.5 billion deal for a long-range air and anti-missile defense system, including local production, with suppliers from China and Europe. The country plans to spend around $70 billion on military equipment by 2023, when the country will celebrate the 100th anniversary of the founding of the modern republic.

The Radar and Electronic Warfare Technology Center was established on a 350,000 square meter plot of land and includes 75,000 square meters of indoor space. The Research and Development Center of the Presidency of Radar and Electronic Wartime Sector, which was approved by the Science, Industry and Technology Ministry, will perform its duties at this plant.

In total, 1,063 technical staff of 776 engineers and 261 technicians will be employed at the plant, and more than 200 support staff will work at the plant.

Design, production, testing and logistic support processes for long-range air defense radars, and electronic wartime systems required by both military and civil use, including ones for combat aircraft and various other antennas, microwave component modules and software, are all required by the Turkish Armed Forces.