Missing British girls' families to travel to Turkey, count on Erdoğan for support 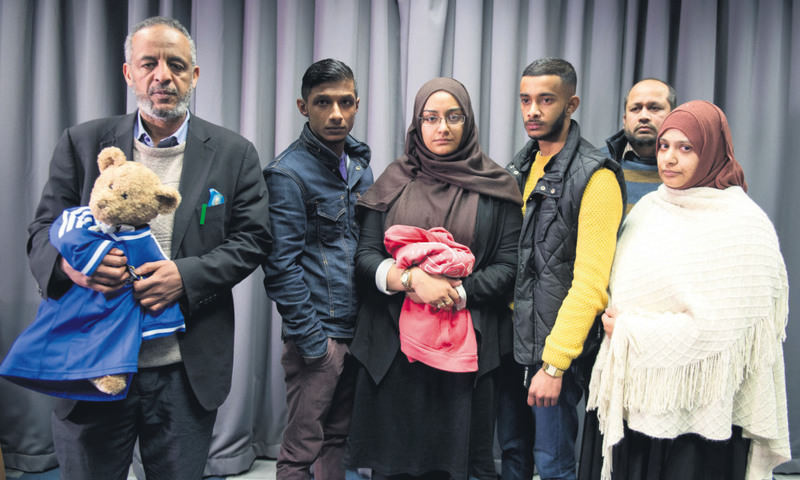 The families of missing British girls Amira Abase and Shamima Begum pose for a picture after being interviewed by the media in central London on Feb. 22.
by Ayşe Şahin Mar 18, 2015 12:00 am

The families of three missing British girls, who are believed to have joined ISIS will come to Turkey to ask for help from Turkish officials, including President Erdoğan, to ensure their return

The families of the three British girls who left their homes to join the Islamic State of Iraq and al-Sham (ISIS) by traveling through Turkey are set to arrive in Turkey next week at which time they hope to receive support from officials to find the girls and ensure their return home.

The families of three British girls - Shamima Begum, 15, Amira Abase, 15, and Kadiza Sultana, 16 - have spoken to the Turkish media ahead of their visit to Turkey. Sharing common concerns, the families said they appreciate the vigorous efforts Turkey has tried to clarify on the incident and have asked for further assistance to find their daughters and make sure they return safely to the U.K. Complaining about a lack of support from the British government and police, the families said they were counting on the Turkish government to facilitate the girls' return.

"We are devastated as a family. We want Turkey's help, and considering the current situation, Turkey is the country that can help us. President Recep Tayyip [Erdoğan] has thus far shed light on the matter and provided us with information during the process that we had not previously had a clue about. He has been offering assistance to us so far, and we would be grateful if he provides us with a little more help on the issue," Shahmina Begum, Shamima's sister said. Expressing her grief, she continued: "I am living in hell. Our only hope is President Erdoğan. I believe he is a very special and good-hearted person. He has a strong personality, and I know he shares our pain."

The three British girls left Bethnal Green Academy in east London in February for Turkey, reportedly to cross into Syria to join ISIS. Since the incident became public, Britain has come under fire for failing to spot the girls and only helping Turkey marginally with intelligence matters. Meanwhile, Turkey has been working diligently to shed further light on the incident and has found further details, revealing how and with whose aid the girls managed to cross the Turkish border.

Foreign Minister Mevlüt Çavuşloğlu announced last week that a Syrian human smuggler working for a Canadian spy agency had aided the girls' passage to Syria. Footage was also released showing the man, identified as Mohammed al-Rashed, speaking to the girls in a Turkish town near the border before the trio boarded a vehicle to cross into Syria.

"Please come home," Amira's father, Hussein Abese, said, conveying a message to his daughter through the media. He said that the Interior Ministry committee of the British Parliament has assured the families that no legal process will be launched against the girls in a bid to relieve the girls in case they fear being punished. He also said that British police had apologized for their failure to prevent the incident.

"It is really difficult to express my feelings right now, as we as a family are in the middle of a huge problem. We need President Erdoğan's help for our daughter to return home," he said.

Kadiza's elder sister, Halima Khanom, shared similar grief over the incident and said: "We are not mad at her; all we want is her return home. I want, with all my courtesy to President Erdoğan, for him to solve the issue and help us. I appreciate his efforts so far, which have been huge, but I ask him to do whatever he can to find my sister." When asked whether there was anything unusual before her sister left, she said there was nothing wrong until they saw she was gone.

The families previously accused the police of negligence for failing to inform them about a letter given to the girls to be submitted to their parents.

In the letter dated Feb. 2, police asked the families to give permission for their children to give a statement about a friend of theirs that left the country in 2014 to join ISIS. In the letter, the police said they were seeking clues as to why and how the girl could have left the country. However, the letter never reached the hands of the parents, as the girls hid it in their bedrooms. The families claimed that if they had received the letter they could have prevented the girls from leaving the country.
Last Update: Mar 20, 2015 10:05 pm
RELATED TOPICS