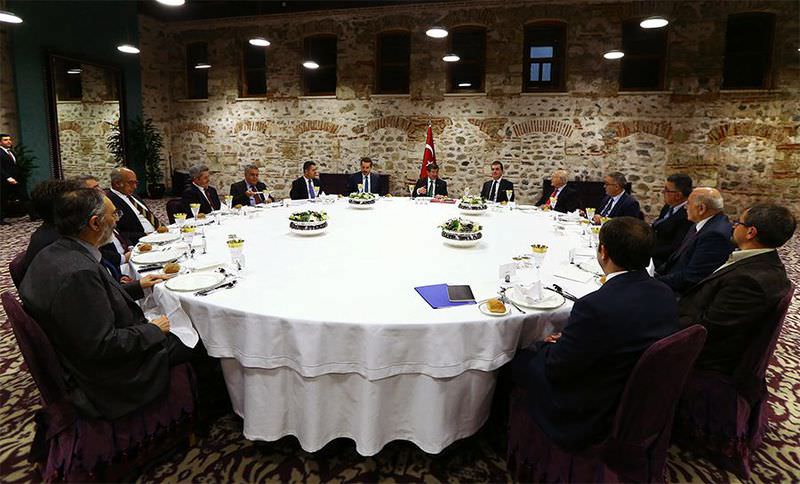 by Merve Aydoğan Mar 22, 2015 12:00 am
As the reconciliation process, which aims to resolve the problems of Turkey's Kurdish minority and also address a number of issues faced by the Alevi community in the country, continues to be discussed in Parliament, Prime Minister Ahmet Davutoğlu met with a number of Alevi nongovernmental organization representatives on March 21 at a dinner in Istanbul at Dolmabahçe Palace.

In efforts to proceed toward a successful democratization process, the ruling Justice and Development Party (AK Party) government aims to address issues raised by the Alevi community, such as the status of cemevis – Alevi places of worship – and regulations about "dedelik," which provide training opportunities for Alevi "dedes" – Alevi community leaders.

Following the dinner at Dolmabahçe Palace, which lasted nearly three hours, Izzetin Doğan, the chairman of the Cem Foundation, said that Davutoğlu had made positive statements and that government officials had informed the attendees of the current status of the government's Alevi reform initiatives.

Doğan said: "The prime minister said he greatly values the decision of the European Court of Human Right [ECtHR] and that the government devotes all efforts to recognize cemevis as official places of worship."

In this regard, in early February, local administrations of several Turkish provinces such as Edirne and Zonguldak declared cemevis as official places of worship.

In addition to the recognition of cemevis as official houses of worship, Education Minister Nabi Avcı attended a ceremony on March 14 marking the start of the building of Hacı Bektaş Veli High School, where the main tenets of the Alevi and Bektashi faith will be taught together with a modern school curriculum.

Furthermore, the attendees from the Alevi nongovernmental organizations emphasized that there was a positive atmosphere at the dinner, and Doğan said, "Prime Minister Davutoğlu is expected to hold additional gatherings in regard to successfully resolving the Alevi issue."

While a reform package is expected for the Alevi community following the upcoming June 7 general elections, the representatives of the Alevi nongovernmental organizations said there was an exchange of ideas in efforts to resolving the general issues of Alevi communities.

As has been numerously emphasized by both government officials and Alevi representatives, the most contentious issue is the status of cemevis.

The president of the Baba Mansur Center, Hızır Düzgün, said they have asked the officials to spare a portion of the government budget for the Alevi initiative.
Last Update: Mar 23, 2015 10:29 am
RELATED TOPICS