This year's Nevruz opens a new page in reconciliation process 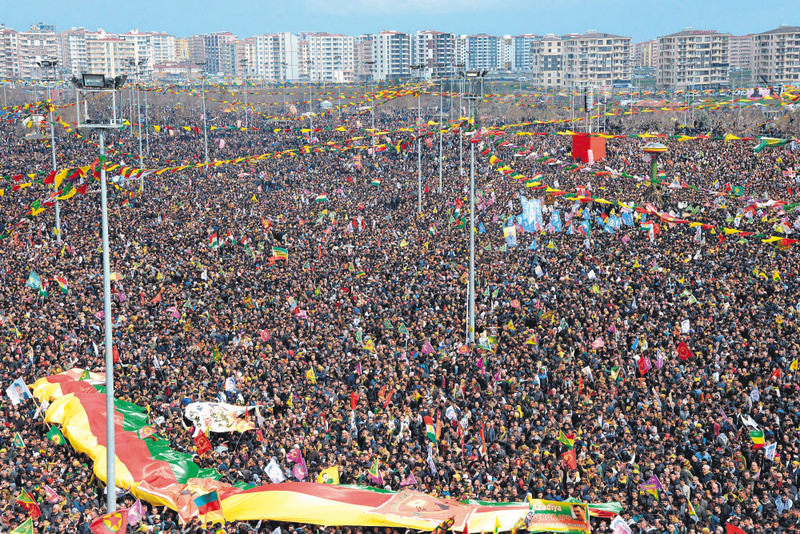 Hopes for further reconciliation were ushered during this year's Nevruz celebrations as Öcalan called on the PKK to hold a congress to lay down its arms, Turkish officials stressed unity

Saturday's Nevruz (coming of the spring) festival celebrated in the southeastern city of Diyarbakır featured the reading of the much-anticipated disarmament call by jailed PKK leader Abdullah Öcalan. The statement was read by Peoples' Democratic Party (HDP) deputies Pervin Buldan and Sırrı Süreyya Önder in both Kurdish and Turkish, where thousands gathered to celebrate the festival. The statement by Öcalan, who advised the PKK to hold a congress to lay down arms, was hailed by some as a key development in support of the government-initiated reconciliation process but was criticized by President Recep Tayyip Erdoğan, who said Öcalan's statement and his call could not be accepted as part of a normal democratic discourse.

The move, which is considered historic, has opened a new page in Turkey's reconciliation process to end the decades-long Kurdish question in which the four-decade insurgency by the PKK will be transformed into a political movement where the demands and will of the group are expected to be discussed without the threat of arms. Opposition parties, with the exception of the Nationalist Movement Party (MHP), also sided with the reconciliation process, which has been launched as a government initiative to invigorate democracy. The MHP has been and is still reacting against negotiating with an organization that previously intended to carve out an independent state from Turkey.

In his letter Öcalan said: "I think it is necessary and historical for the PKK to end the 40-year-long armed struggle against the Republic of Turkey and hold a congress to conform to the new era's spirit."

Critics have been underscoring the progress achieved thus far in the name of establishing peace with the insurgents and deem the call for disarmament by its leader a landmark step, as the point reconciliation efforts have come to were previously unimaginable given the losses Turkey suffered due to the conflict with the PKK. Now, all eyes have turned to the date that will be determined for the PKK meeting in which the organization will discuss how and when it will disarm.

"Our congress should convene and start a new era. The start of an era based on constitutional citizenship in which equal and free life should be given. We are shifting from an era of conflict to an era of peace," Öcalan said in his message, ordering the PKK to lay down its arms.

"This organization, which even forced the definition of barbarism, staged wild massacres against peoples of the region, regardless of women and children," the letter said.

Öcalan based this decision on the consensus reached between the government and HDP deputies in Istanbul's Dolmabahçe Palace on February 28. However, President Recep Tayyip Erdoğan said that he does not approve of the simultaneous statements made by Deputy Prime Minister Yalçın Akdoğan, Interior Minister Efkan Ala and HDP Deputy Sırrı Süreyya Önder at the Prime Minister's Office at Dolmabahçe, Istanbul regarding the reconciliation declaration consisting of 10 points. He claimed that the content of the declaration was a far cry from democracy.

Speaking to the press on his way back from Ukraine on Sunday, Erdoğan said that he opposes the declaration the same way he has opposed the establishment of a monitoring committee for the reconciliation process. "Which part of this text can I approve under the name of democracy?" he said.

Erdoğan reiterated that he is against the establishment of a monitoring committee and that there is no convention that necessitates the discussion of each and every single issue at all times between the government and the president, implying that the government had proceeded with the aforementioned issues without reaching a mutual understanding with him.

Erdoğan shared his wish that Nevruz would become a means of strengthening brotherhood and a peaceful environment.

"Nevruz, as a festivity celebrated in a large region for thousands of years, is the name of unity, solidarity and brotherhood symbolized through the awakening of the spring," Erdoğan said, pointing to the will of the nation to build its future together.

While celebrating the arrival of spring, Prime Minister Ahmet Davutoğlu made a call to bury hatred, enmity, violence and weapons forever. Speaking at an event organized to celebrate Nevruz, the prime minister said that Nevruz represents a new beginning and highlighted that three principles should be constructed with the arrival of spring including unity, amity and fraternity.