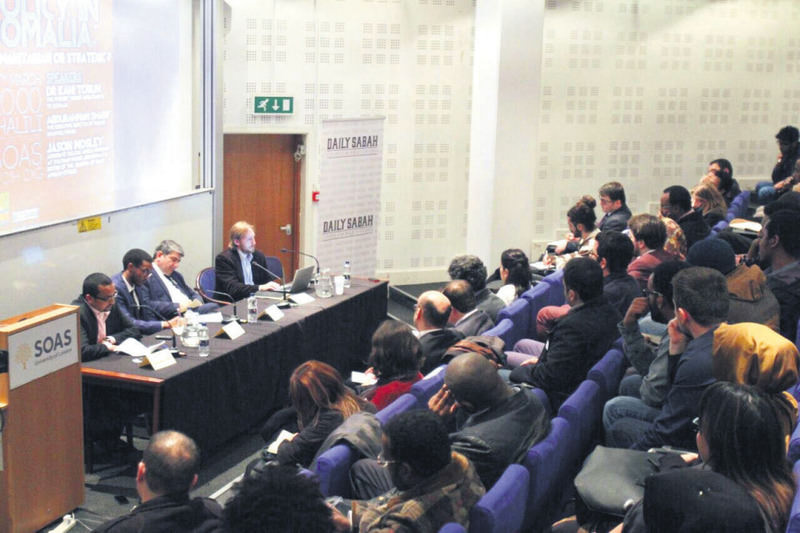 by Büşra Akın Dinçer Mar 22, 2015 12:00 am
Turkey's increasing diplomatic involvement in Africa was discussed by the panel, "Turkish Foreign Policy in Somalia: Humanitarian or Strategic?" on Friday at the School of Oriental and African Studies (SOAS) at the University of London. The Daily Sabah Centre for Policy Studies, the think tank extension of the Daily Sabah newspaper, organized the event in collaboration with the SOAS Somalia Society. Turkey's former ambassador to Mogadishu, Dr. Kani Torun, Muslim Charities Forum Chairman Abdurahman Sharif, and Jason Mosley from the Chatham House think tank participated in the conference. Mohamed Abdiselam from SOAS Somalia Society was the chair of the discussion.

An associate fellow in the Africa Program at Chatham House, Mosley opened the discussion as the first speaker. In his remarks Mosley underlined the difference of Turkey's efforts in Somalia compared to others who are engaged in the country.

"Turkey's efforts in Somalia are much different than the Western approach in the country. It has much more legitimacy and popularity," he said. Mosley also said that the reason behind the popularity of Turkey is the manner of humanitarian aid. "Turkey has the support of the grassroots of Somalia. They have appreciation because Turkish involvement is only business, no counter-terrorism or anything else."

Torun started his speech by laying out Turkey's clear principles in its engagement in Somalia. He said one of the most important principals was no involvement in local politics in the country. He also said Turkey took risks that other countries could not take in Somalia:

He also emphasized how sensitive President Recep Tayyip Erdoğan is about Somalia. "The Somali issue really touches President Erdoğan; he sees this effort from the perspective of Muslim solidarity," he said.

Sharif pointed to the politicization of humanitarian assistance in Somalia before Turkey. He said: "President Erdoğan has changed the aid system in Somalia. Turkey, in the past few years, has been promoting the concept of 'humanitarian diplomacy' as the heart of its foreign policy. Turkey's credibility has significantly increased by establishing a base for soft power. Together with the value-based and humanitarian-political narrative that has an Islamic tone, Turkey has been able to generate a sense of trust and brotherhood with the Somali people." Since Erdoğan's visit in 2011, the first head of the Turkish government to visit Somalia, Turkey's role in Somalia has accelerated. Turkey has collected around $300 million worth of donations.

Turkey's engagement in Somalia has made visible changes to the country in many areas from health to infrastructure. In addition to this, bilateral agreements between the countries have been signed including treaties to train the Somali national army, and Turkish Airlines has started flights to the capital Mogadishu. Turkey's efforts have paid off, and the increasing relationship between the two states has brought the world's attention to the region and many have started to question Turkey's involvement in Somalia.

With this panel, the Daily Sabah Centre for Policy Studies launched its conference series on Turkey around the globe. Daily Sabah aims to provide broader understanding by organizing various conferences within a Turkish socio-political framework and its reflections at the regional and global level.
Last Update: Mar 23, 2015 1:29 pm
RELATED TOPICS