Peace cannot be achieved under the shadow of weapons, says president Erdoğan 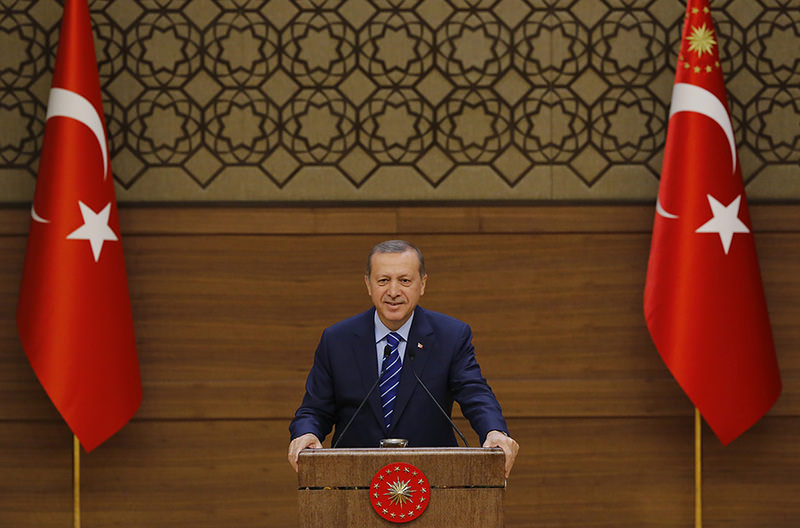 President Recep Tayyip Erdoğan said yesterday that peace cannot be achieved under the shadow of weapons, and despite imprisoned PKK leader Abdullah Öcalan's call for PKK disarmament, the government cannot trust the sincerity of the other side of the process unless it takes concrete steps.

Speaking at a weekly meeting with local neighborhood chiefs at the Presidential Palace, he said his recent criticisms on the way the reconciliation process has been proceeding were aimed to improve rather than hamper it and added that his actions were for the good of the country and to institute permanent peace.

He reiterated that he was the initiator of the process and was concerned over how momentum is maintained to bring it to a successful conclusion. He also said he had both the right and the obligation to voice his opinions over how the process continues. There was no question about the necessity of the PKK laying down its arms, he said, before adding that the problems faced by Kurds, like any other community in Turkey, should be aired in the political arena.

Underlining the significant progress made in the past decade, he said there was no longer a Kurdish issue, but only problems faced by Kurdish citizens. He said the government had recognized the issues faced by Kurds in Turkey and had begun to find solutions to the problems.

"When I say there is no Kurdish issue, some ill-intentioned people try to distort this," Erdoğan said, adding that Kurds, just like any other people in the country, have problems. He continued by criticizing the perpetual reference to the Kurdish issue, saying: "Some talk about the Kurdish problem without respite as if there is no other issue in the country," describing such a stance as sowing division in the nation.

He also said that disarmament calls were made during Nevruz last year, but were not implemented. "It is impossible to believe these calls without seeing them implemented," he said. He also called on the Peoples' Democratic Party (HDP) to speak under a democratic framework and completely disregard violent means. "We got to know them very well," Erdoğan said, adding that the HDP has failed to keep their promises, and held them responsible for calling on people to take to the streets during the Oct. 6-7 Kobani protests.

The president said that he does not approve of the simultaneous statements made by Deputy Prime Minister Yalçın Akdoğan, Interior Minister Efkan Ala and HDP Deputy Sırrı Süreyya Önder at the Prime Minister's Office at Dolmabahçe, Istanbul regarding the reconciliation declaration consisting of 10 points. He claimed that the content of the declaration was a far cry from democracy.

The government, led by Prime Minister Ahmet Davutoğlu, has consistently said that it will not make any concessions if the use of arms is brought to the table, as public order is an indispensable part of democracy that cannot be sacrificed.

The Justice and Development Party (AK Party) government initiated the reconciliation process to bring a permanent solution to the country's 30-year conflict between the PKK and the state, and has put an end to violence through a series of democratic reforms and economic investments to boost stability in the region. A cease-fire was announced in 2013.