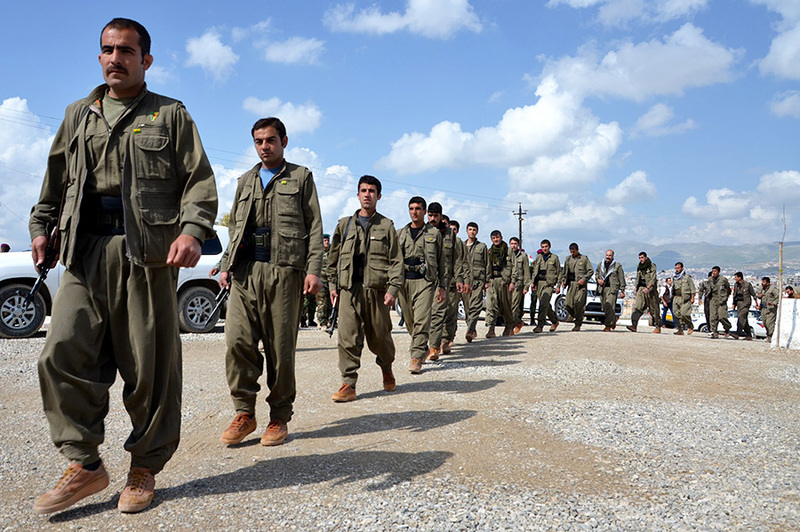 by Ayşe Şahin Mar 25, 2015 12:00 am
Turkish Armed Forces Chief of General Staff Gen. Necdet Özel has warned against attempts by the PKK to portray itself as an innocent organization to the Western world. The fighting that its Syrian Democratic Union Party (PYD) extension is engaged in against the Islamic State of Iraq and al-Sham (ISIS), a common foe of countries around the world, is providing it with an opportunity to appear legitimate.

"The terrorist organization [PKK] is trying to instill a different mindset by depicting itself and its extensions as innocent while ramping up gains in line with developments in Syria and Iraq," Özel said in an interview with Defense and Aviation magazine. Özel added that the climate in Syria and Iraq has strengthened ISIS and leads to a perception that the PYD, which is an extension of the PKK in Syria currently fighting ISIS, is a legitimate force in the area.

As violence in Syria and Iraq continues to escalate due to ISIS, the U.S.-led coalition that was established with the purpose of wiping the militants from the region, are looking to support the fight that Syrian Kurds are conducting against the extremists. Since the coalition was formed the U.S. has provided veiled assistance to the PYD's armed People's Protection Units (YPG) that fought against ISIS in the Syrian town of Kobani, which was previously besieged by ISIS militants, and in doing so have ignored Turkey's advice on the matter.

Turkish officials are refusing to aid YPG forces that fought against ISIS in Kobani, considering them an extension of the PKK, and have said at every opportunity that they will not provide assistance to a terrorist organization while fighting against another. Turkey's stance on the matter led it to be criticized for not adequately contributing to the coalition it was part of to fight ISIS. However, to prove its sincerity in the fight against the militants, Turkey proposed the idea of putting the Kurdistan Regional Government's (KRG) peshmerga forces into the fight and provided them with equipment and training. ISIS forces were driven out of Kobani by KRG peshmerga forces fighting alongside the YPG in January.

Özel also warned that the risk of a conventional war in the region has not disappeared, considering the ever-present tensions over economic benefits, polarization and decreasing resources.
Parliament Speaker Cemil Çiçek, speaking at the Washington-based Center for Strategic International Studies, also shared similar concerns and pointed out that ISIS is not the only terrorist organization in the region and that other groups such as the PKK should not be portrayed as legitimate. Çiçek called for a common attitude against all terrorist organizations and highlighted that the PKK's fight against ISIS does not remove the fact that it is a terrorist organization. He also slammed some media outlets for depicting the PKK as a humanitarian charity.

He also suggested that Syrian President Bashar Assad's regime is the source of chaos and that without its termination peace will not be restored in the region.

"While Assad is in power, it will not be possible to root out ISIS, and other threats will follow," Çiçek claimed.

The removal of Assad from power has been one of Turkey's perpetual suggestions to its fellow coalition forces. The U.S., which has chosen to fight solely against ISIS, has sidelined itself over the question of fighting Assad, despite constant reiterations by Turkish officials that the rise of ISIS is a consequence of the Assad regime and that the crisis cannot be defused without both being targeted.

In Washington, Çiçek also touched on efforts that Turkey has exerted thus far and said it has done its part in contributing to the coalition. He pointed to an agreement signed by Turkey and the U.S. to train and equip moderate Syrian opposition forces, blocking the flow of people seeking to join ISIS and struggling against ISIS's oil smuggling. He also noted the substantial efforts Turkey has made in the refugee crisis.

He said that Turkey has hitherto prevented 12,550 people from 93 countries from entry and added that 200,000 people from 78 countries, including 16 U.S. citizens, have been deported. He also added that eight border gates out of 13 have been sealed off and $5.5 billion from Turkey's budget has been spent on the nearly 2 million refugees in 225,000 camps.

Özel also supported Çiçek's remarks on border security in his interview with the magazine, saying that one more team will be added to the already existing military's Special Operations commando teams. He also said the teams' authorities will be regulated to enhance security at borders.