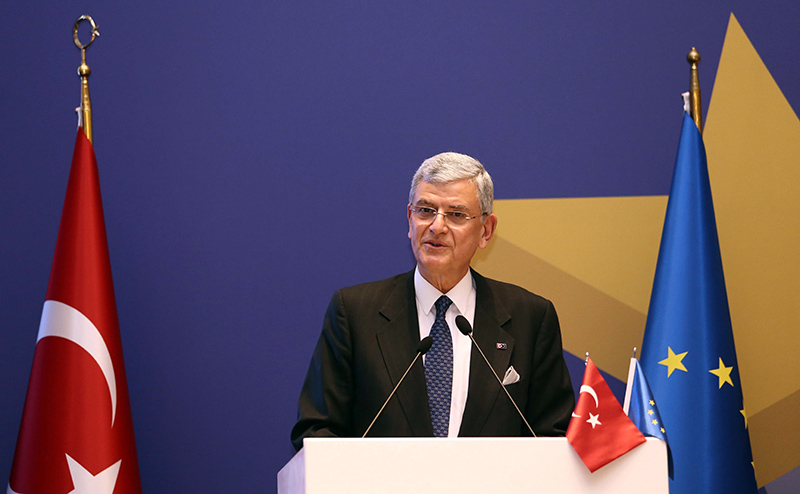 by Fatih Şemsettin Işık Mar 26, 2015 12:00 am
EU Minister and Chief Negotiator Volkan Bozkır claimed that the Gülen Movement and the opposition in Turkey have been negatively influencingTurkey's image abroad. "Unfortunately, there has been a very negative perception of Turkey abroad recently. The Gezi Park events, Kobani, some foreign-based coalitions, the media, Gülenists and the opposition try to do their best to turn Turkey's image into a negative one," he said.

During a conversation with members of the press in Rome on Wednesday where he went to hold official talks, Bozkır complained about some elements in Turkey, including the Gülen Movement and opposition parties acting against Turkey's image in the West. Pointing to the importance of discussion in order to overcome the negative perception that emerged after the Gezi Park protests, he said: "Some developments in the region are important factors in this negative perception. A very negative image was constructed of Turkey through Kobani – a kind of apprehension that Turkey does not act while people are dying. It can be said that we dealt with this problem by maps and discussing what happened there."

Regarding the groups attempting to tarnish Turkey's image abroad, Bozkır said they utilize the Armenian issue as an opportunity, as 2015 marks the 100th anniversary of the events. "They are conducting a new operation on every matter that might damage Turkey's image, via media opportunities as well," he said.

Indicating that the Gülen Movement is among the groups that work against Turkey's image abroad, Bozkır asserted the recent letters written by U.S. senators over issues of press freedom in Turkey were completely organized by a Gülen Movement-led structure. "Turkish-U.S. relations exist not only on paper. It is impossible to harm important relations to such an extent only with letters from some senators. The Turkish public knows what is going on. Therefore, I do not pay any heed to those letters," Bozkır said.

Stressing that the opposition in Turkey has changed its shell, Bozkır said: "Last week, members from the Republican People's Party [CHP] boycotted the summit of the EU-Turkey Joint Parliamentary Committee and issued a declaration. No matter how tense domestic affairs were, deputies of opposition parties would not have done such a thing in the European Parliament before."

Implying that the opposition in Turkey is far from providing constructive criticism, he also emphasized that truths must be seen while making criticism.