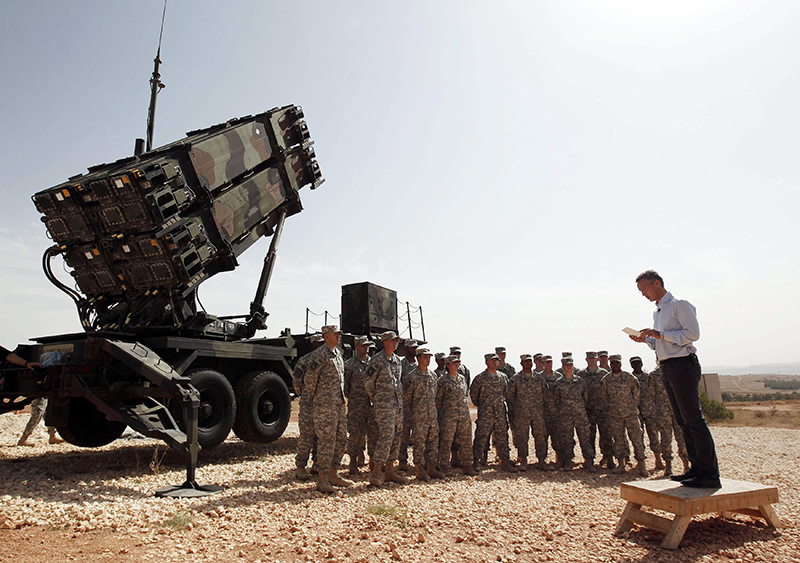 | Photo: Reuters
by Ali Ünal Mar 26, 2015 12:00 am
The rocket that was fired by Syrian government forces across the Turkish border on March 24 exploded in the Reyhanlı district of the southern province of Hatay. While the latest spillover of violence from neighboring Syria injured five Turkish nationals, the incident also prompted questions about NATO's capability to protect Turkey, which was one of the important flank countries during the Cold War, and a member of the alliance since 1952.

Several Turkish media outlets reported on Thursday that the Patriot radars did not intercept the Syrian missile, and some further claimed that the Patriot system is only programmed to protect NATO at the Incirlik base, and not all Turkish borders and this is why the Patriot radar did not respond. A senior NATO official in Brussels who answered Daily Sabah's questions under the condition of anonymity said that the missile landed outside the areas covered by the current Patriot configuration.

"The Patriot missiles are deployed in a way to provide the greatest possible coverage and maximum protection of the Turkish people against missile attacks. Millions of people are better protected on NATO's southeastern border as a result. We remain vigilant and committed to our Patriot deployment to help protect Turkey against missile attacks," the NATO official said. However, deployment locations indicate that the current Patriot batteries are not sufficient to protect all Turkish borders.

In response to Turkey's request, NATO decided to deploy Patriot batteries in December 2012 and their role was defined as to defend Turkey against the threat posed by Syrian ballistic missiles. Despite Turkey's demand for 20 Patriot batteries to protect its 800-kilometer border with Syria, there are only five batteries currently serving in Turkey – one in Adana, two in Kahramanmaraş and two in Gaziantep provinces.

According to defense expert Oytun Kan, these five Patriot batteries are not enough to protect Turkey's Syrian border: "Considering Turkey's 800-kilometer border with Syria, it is clear that the present missile batteries are insufficient to protect the borders." Mete Yarar, a former member of the Turkish Armed Forces and a security expert, drew attention to the location of the Patriot batteries as being significant. "You can't protect your Hatay border by a missile battery that is positioned in Adana or Kahramanmaraş. In order for full protection, it is necessary to deploy those batteries to regions closer to the border," he said.

Regarding the allegations that Patriot missiles are only there to protect the Incirlik air base, the senior NATO official said that the decision on the location and the number of batteries was based on consultations between NATO allies, including Turkey, and a detailed military assessment jointly conducted with the Turkish military. According to defense experts, the range of the missiles in the system is between 20 kilometers to 160 kilometers and the radar range is about 250 kilometers to 300 kilometers. However, considering the air distance between Adana to Hatay is about 300 kilometers, and Gaziantep to Hatay is about 200 kilometers, the Patriot batteries may not be able to protect Turkey's southern borders.

The first Patriot air defense systems were deployed by U.S. forces in the mid-1980s. During the first Gulf War, they were used to defend against Iraqi scud missiles. Kan also stressed that Patriot missiles do not have a successful track record. "Patriots also failed in preventing missile strikes during the Gulf War. Although the PAC-2 and PAC-3 types of missile batteries, which were sent to Turkey from NATO, are more developed than the batteries used in the Gulf War, there is not an expected 100 percent success rate from these batteries in preventing missile strikes," he said. In addition, Yarar underlined that Turkey's need for a long-range security system has once more been proven with the latest incident.