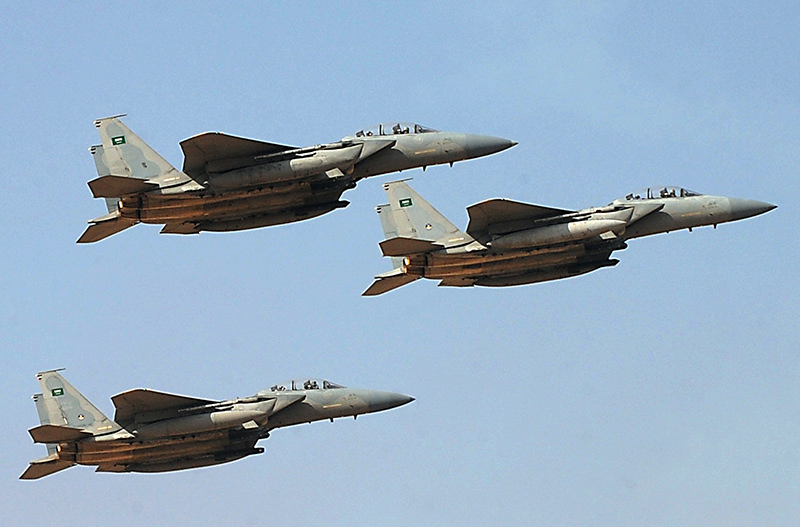 | Photo: AFP
by Merve Aydoğan Mar 27, 2015 12:00 am
As Saudi Arabia and its regional coalition allies launched military operations in Yemen against Houthi rebels threatening the government there on Wednesday, President Recep Tayyip Erdoğan held a telephone conversation on Friday with Saudi King Salman to discuss the recent developments in Yemen.

While the Foreign Ministry released a statement on Thursday expressing Turkey's support for the military operation led by Saudi Arabia in Yemen, Erdoğan shared his concerns with King Salman. He reportedly said: "Any threat against Yemen's unity and integrity would concern the international community about the region's safety and stability." Speaking exclusively to Daily Sabah, Jamal Khashoggi, the general manager of Al-Arab Television, commented on the recent operation as well as Saudi-Turkish relations.

Evaluating the recent operations in Yemen, which aim to defend and support the legitimate government of Yemen and prevent the radical Houthi movement from taking over the country, Khashoggi underlined that while Saudi Arabia is supporting legitimacy in Yemen, he said it is not invading Yemen and it neither has any territorial interest in Yemen. Although the international community supports the operations in Yemen, it also raises concerns over the possibility of further regional war. In this regard, Khashoggi said that it all depends on Iran's role in the recent operation. He said: "While the Iranians will not take the risk of widening the conflict, the alert is at the highest in Bahrain as Iran may try to stir trouble in Bahrain or even Lebanon."

Commenting on Turkey's role in the recent operations, Khashoggi said: "Turkey is in total support of it as the bilateral relations between the two countries are at their best." He also added that although Saudi Arabia does not currently need additional forces, Turkey would provide logistical support if needed. Khashoggi continued by saying that relations between Turkey and Saudi Arabia are at a new phase, with newly enthroned King Salman.

"Since all countries in the Middle East are under threat due to conflicts, Turkey and Saudi Arabia are the only two countries that could put an end to the deterioration in the region. If the Saudis and Turks plan something to resolve the conflict in Syria, the Americans will come to support it eventually," Khashoggi added.