Turkish, American speakers agree on a need for closer cooperation 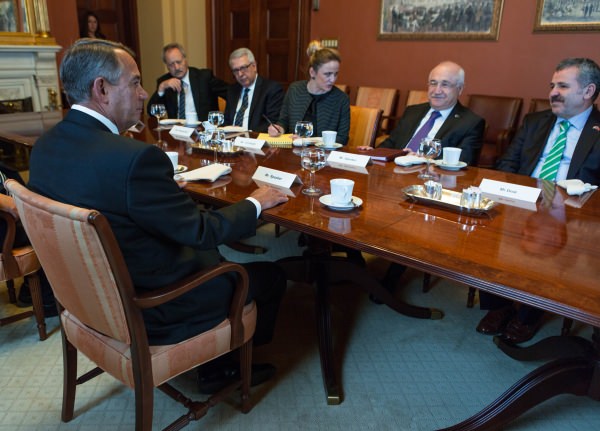 | Photo: http://www.speaker.gov
by Ragıp Soylu Mar 27, 2015 12:00 am
On his visit to the U.S. capital, the speaker of Parliament raised his concerns regarding the hesitant U.S. foreign policy in the region and warned for severe consequences of sectarian clashes in Syria and Iraq.

Cemil Çiçek, the speaker of Parliament, along with four other members of Parliament met the president pro tempore of the U.S. Senate, Orrin Hatch, and the speaker of the U.S. House of Representative, John Boehner, on Wednesday and discussed a wide variety of topics including the rise of the Islamic State of Iraq and al-Sham (ISIS) and the proposed Armenian Genocide Recognition Resolution currently under consideration in the House of Representatives.

Çiçek conveyed Turkish criticism of the current U.S. foreign policy in the region, specifically in Iraq and Syria, and underlined the need for a comprehensive strategy on ISIS. "The U.S. should eventually determine the fate of [Syrian President] Bashar Assad," he said, according to Şaban Dişli, Turkish-American Friendship Group chairman in Parliament, who attended the meetings and disclosed the details of the talks to Daily Sabah.

Çiçek, who will complete his term this year in June, asked for Boehner's support for a no-fly zone and a safe zone in Syria to shelter Syrian refugees and strengthen Syrian opposition forces in the north of the country. "Turkey might do more for the training of Syrian opposition forces, but we also expect more cooperation on ISIS." he added.

Dişli said that Boehner had responded to Çiçek's comments positively and agreed that the administration of U.S. President Barack Obama should not treat Kurdish militant PKK as a humanitarian organization just because Syrian the PKK-linked Democratic Union Party (PYD) was waging war on ISIS in northern Syria.

The two leaders also exchanged their views on the proposed Armenian Genocide Recognition Resolution, which was introduced to Congress last week with 43 bipartisan signatories. Boehner, noting his visit to Turkey last year, reiterated his stance on the resolution and said that he would not bring it to the House floor if it passes through committee.

Dişli said that neither senators nor representatives asked questions about Gülen Movement-sponsored letters from Congress addressed to U.S. Secretary of State John Kerry urging the State Department to pressure Turkey on press freedoms.

"We invited our American friends to visit Ankara, [it's] very likely [they will come] in late May. Those bilateral contacts are solidifying our partnership and increasing mutual trust to move together in the future" he said.