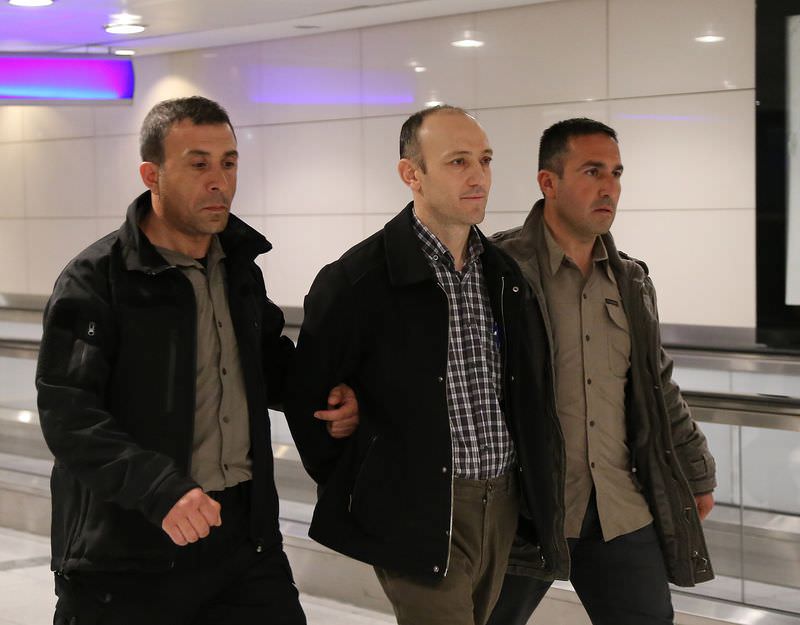 by Nurbanu Kızıl Mar 28, 2015 12:00 am
Two police officers allegedly associated with the Gülen Movement who had escaped to Romania after being accused of wiretapping President Recep Tayyip Erdoğan's office while he was prime minister arrived in Istanbul late Saturday after their extradition from Romania. Following completion of medical examinations, both suspects were arrested, pending trial.

Commenting on the extradition of the Gülenist suspects in Istanbul on Sunday, President Recep Tayyip Erdoğan addressed the movement and asked "Where are you running to? Aren't you the ones who placed bugging devices in the prime minister's office? You fled to Romania and got busted there," and added, "Whereever you go, we will find you," showing determination to bring other fugitive suspects, who fled the country to escape the probe investigating cheating allegations in the 2010 Public Personnel Selection Exam.

A Romanian court ruled on March 20 for the extradition of the two fugitives, who were on the run upon facing charges, after Turkey sent an investigation file prepared by a prosecutor's office to Romania. The two alleged Gülen Movement-linked suspects, stood trial in a Romanian court for a second time last week.

The two suspects, Sedat Zavar and İlker Usta, fled abroad to avoid being questioned as part of an operation in Turkey into illegal activities of the Gülen Movement, led by Fethullah Gülen, who lives in self-imposed exile in the U.S.

The two suspects are expected to attend a hearing scheduled for May 4 in Ankara. Prosecutors are demanding between 21 to 36 years in prison for the suspects.

The suspects are accused of wiretapping Turkey's top officials and of disclosing highly confidential information as well as "forming an organization to commit crimes and being a member of a criminal organization," "violating privacy," "illegally seizing personal information" and "forgery of official documents."

Prosecutors will seek heavy sentences in accordance with Article 328 of the Turkish Penal Code. The public prosecutor from the Bureau of Investigation into Crimes against Constitutional Order, Durak Çetin, completed the bill of indictment and sent it to the Ankara 11th High Criminal Court on Nov. 18.

There have been many charges targeting members of the Gülen Movement since their alleged attempt to oust the government became public with the purported operations they carried out on Dec. 17 and Dec. 25. They have been accused of trying to topple the elected government by exploiting their authority in key government institutions such as the judiciary, Presidency of Telecommunications and the police force, which they had infiltrated concealing their loyalty to the movement.

Speaking during an inauguration ceremony in the western province of Bursa last month, Erdoğan said: "Two of those who wiretapped my office were caught in Romania. They first fled to Croatia, moved on to Hungary and then to Romania where they were caught. We have requested their extradition, which I hope will be granted soon." Erdoğan revealed in late 2012 that a listening device had been found in his office and charges of political spying were brought against 13 suspects.

The Gülen Movement, led by the U.S.-based former imam, Fethullah Gülen, has been deemed a threat to national security by the government for alleged illegal operations including trying to topple the government. They are accused of infiltrating top state institutions and wiretapping thousands of people including senior state officials, journalists, actors, heads of nongovernmental organizations and others citizens.

So far, three arrest warrants have been issued for Gülen. He is the prime suspect in the wiretapping investigation, the Tahşiye case, where he is accused of forming an illegal organization to demonize a rival religious group, and in the probe looking into claims of cheating on the 2010 Public Personnel Selection Exam (KPSS). The government is expecting Interpol to issue a Red Notice following the completion of the legal process in Turkey.

*Contributed by Ebru Şengül and wires