Iran losing in Yemen will give us advantage over Assad 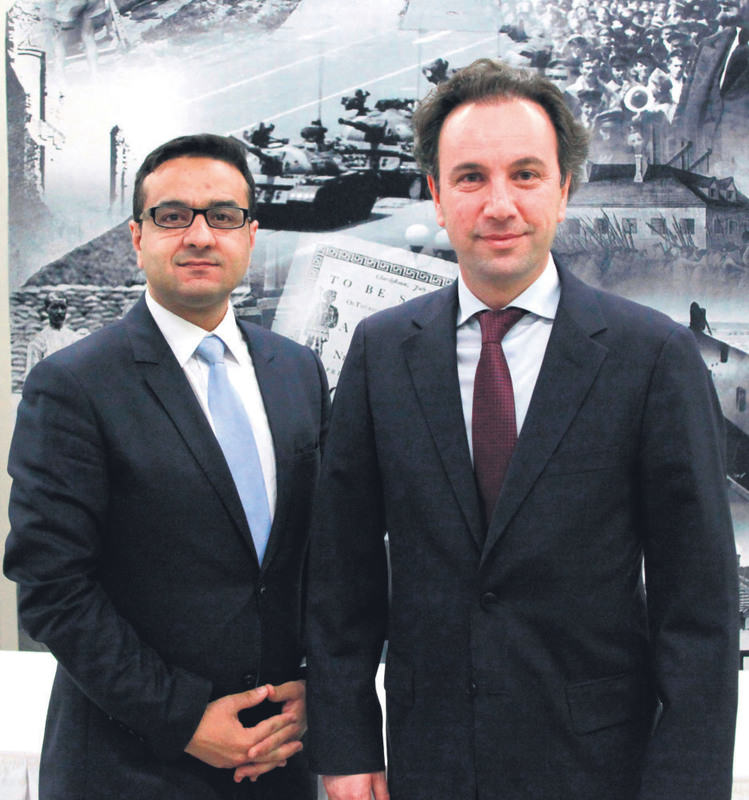 In an exclusive interview with Daily Sabah, Syrian National Coalition head Khaled Khodja(R) said that Iran losing ground in Yemen will put the Syrian opposition in an advantageous position in the fight against the Assad regime, which gets extensive support from Iran's sectarian foreign policy

There has been a civil war in Syria for over four years, which started in March 2011 with the al-Assad administration's violent suppression of the protests in Daraa, near the Jordanian border. This civil war, which has caused hundreds of thousands to be killed by the regime and forced millions of people to emigrate, has become a severe crisis not only in Syria, but also in the Middle East.

Opposition against al-Assad is conducted through the National Coalition for Syrian Revolution and Opposition Forces, also known as the Syrian National Coalition. The organization, defined as the "only legitimate representative" of the Syrian people by many countries, including the U.S., members of the EU, and Turkey, is currently headed by Khaled Khodja, who was elected in January. Daily Sabah spoke with Khodja about the current situation of the crisis in Syria and its future.

Let's begin from the most current events. How will the conflict between Saudi Arabia and Iran in Yemen reflect on Syria?

It is not possible to analyze Syria as an isolated entity. Events happening in the region are connected to each other. With the support of Iran, Houthi existence and dominance became possible. Iran used the nuclear negotiations with the West as a cover and spread its influence in the region. If Iran had already completed its nuclear program, this gain would not be possible. Iran started to pose a threat in Yemen after countries such as Iraq, Lebanon, Syria, Bahrain and Kuwait. Iranian administrators are openly admitting what is happening in Yemen. Qasem Soleimani threatened Jordan by stating, "We can control Jordan as well."

Saudi Arabia's operation in Yemen is a message to Iran. Saudi Arabia is showing that there will be consequences for Iran's aggression. The fading of Iran's influence and control in Yemen will benefit our movement in Syria. As I have said, Syria should be analyzed when taking the region into consideration. Iran is also losing its grip in Syria. Recently, we have taken back the city of Busra in Daraa from the Iranians. We have repelled the fifth siege attempt on Handarat. Iran is not able to hold the territories it has. This instills morale in the Free Syrian Army and conveys the message that Iran's spread of influence will be prevented.

Recently, oppositional forces have been pushing forward in Daraa and Idlib. Can we say that this is due to the weakening of ISIS, thus, the opposition's focus on al-Assad forces?

The fight in Idlib against the regime began as Ahrar Ash-Sham, al-Nusra and the FSA joined their forces. This is a serious strategic gain because this will break the siege in Aleppo as well. This will result in the total control of the north of the country. The region will be cleansed of Iranian paramilitary and al-Assad forces. Of course, we will have to face ISIS; however, for the time being, al-Assad forces will be losing ground. We have seen that ISIS comes into the play when al-Assad forces are retreating.

Since Kobane, ISIS has suffered a psychological collapse. They started to move their emplacements from Aleppo to al-Raqqah. ISIS is still there, but with low morale. There were conflicts in ar-Raqqah and Deir ez-Zor. Due to the collapsed morale, they are not able to wage war. This is an advantage for us in the manner of controlling the region and fighting against regime forces.

In recent weeks, Ankara and Washington have agreed on a train-and-equip policy. How do you see its future?

We see this concept differently. This policy is not for fighting against ISIS, but against terror. The regime's actions should be defined as terrorist activities, and the FSA should stabilize the region. In this manner, train-and-equip is a positive development. Turkey's agreement is in accord with the FSA. However, this is an agreement realized by Turkey. There are other countries, such as Jordan, Saudi Arabia and Qatar. We hope that other countries will also act similar to Turkey; however, these agreements should be directly done with the FSA.

How do you evaluate U.S. Secretary of State John Kerry's statements regarding a solution with al-Assad?

The current situation is similar to this. Three days before Kerry, the director of the CIA made a statement about a solution leaving al-Assad intact as the head of the state. Many countries and the Syrian people perceived this as a strategy. With the stark opposition of countries who are friends of the Syrian people, such as Turkey and France, they seem to retreat.

Our only relation with the al-Assad regime is the negotiation process in Geneva. This negotiation process has to start again, and the two parties should negotiate to set up a transition committee. This committee should be mutually agreed upon. Therefore, if there is an objection to a person, he will not be on the committee. The committee will have the authority of a state. This implies that al-Assad will not be in the future of Syria. Russia objected to this and pulled al-Assad from the negotiations. Kerry's statements give a message to Russia, opening the road to Moscow. Russia, like Iran, suggests a government of national unity, which is not acceptable by us.

There has been a civil war waged for over four years in which hundreds of thousands of people have been slaughtered. The regime is still intact. Under what conditions are peace or a cease-fire possible? Is it possible to have a cease-fire in an equation that includes al-Assad?

We have observed the operation on Sana'a. Think about Abdullah Saleh in Yemen. He was deposed, but returned to Sana'a to include himself in the peace negotiations. We have seen how that ended. He was backed by Iran through the Houthis, and he started a civil war. These kinds of dictators always cause chaos. Al-Assad waged war on his own people, killed 300,000 people and detained 250,000 – most of whom are missing. Their fates are unknown. More than half of the people emigrated to other cities or countries. He bombed state institution with his planes. More than half of the health and education facilities were rendered useless. Places of worship are also in the same state.

The state has collapsed, but the regime still exists. We have observed that the regime has been destroying itself in recent weeks. With the Iranian army's entry into Syria, Iran started to purge regime officials who opposed their entry. Rustum Ghazaleh is one of the most prominent figures in the regime; but due to his opposition to Iranian occupation, he was beaten by another intelligence unit. He is the head of the Syrian military intelligence. There are rumors about his death. Again, 15 military officers were executed due to their opposition to Qasem Soleimani. Continuing with al-Assad will result in total chaos; after massacring his people, destroying the state, he will cause the destruction of every state institution. Shabihas were stating that either al-Assad stays or they would burn the country to the ground. A solution leaving al-Assad intact means the destruction of the country for the sake of al-Assad. There is a serious error in public opinion. It is claimed that while al-Assad is wicked, he stabilizes the country; this understanding is completely wrong. The chaos is caused by al-Assad; stability is only possible if he is deposed. If you look at our oppositional movement, you can see that many ethnic and religious groups from Assyrians to Kurds, Druze to Christians, members of the Ikhwan to the Communist party came together to establish a state that is based on human rights, freedom, and democracy. The Syrian people want to see a country in which all groups are represented. Stability is only possible this way. Single party or a single-family administration can only cause chaos.

Do you think that without al-Assad, negotiations are possible with Ba'ath members?

There are also Ba'ath elements among our opposition. Riyad Hijab, who is one of the former ministers, is a member of the Syrian National Council. There are both old and new figures of Ba'ath among us. We are thinking of appointing these people in the transitional period as a project. We are appointing technocrats from the people who left the al-Assad regime to countries that recognize our opposition. We will not repeat the mistakes that were made in Iraq. We do not want to cause chaos by abolishing both the Army and Ba'ath. Everyone, besides those who are engaged in criminal activities, will play a part.

ISIS has lost its power after Kobani. Do you think air raids by coalition forces are an effective measure for completely eradicating ISIS?

ISIS generally avoids confronting the regime in Syria. They do the same when the FSA is powerful – they run. I don't see ISIS as a great threat. It mostly consists of foreign fighters. If they confront a powerful force, they will relocate and try to cause chaos in another country, as we have previously observed in the cases of Bosnia and Afghanistan. These kinds of organizations cannot exist where there is stability.
Last Update: Mar 30, 2015 5:05 pm
RELATED TOPICS