AK Party bids farewell to outgoing deputies ahead of elections 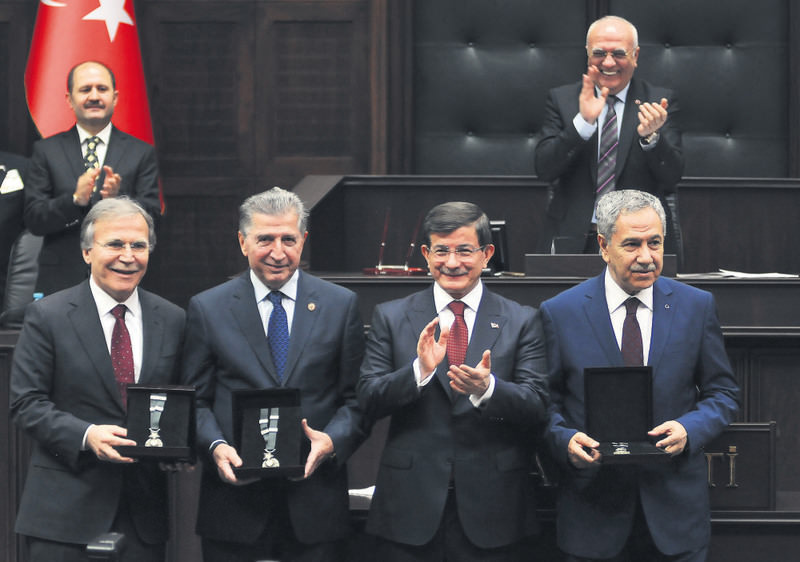 Prime Minister Ahmet Davutoğlu, speaking at the Justice and Development Party (AK Party) parliamentary group meeting yesterday, thanked party members who will not be able to be deputy candidates again due to the party's three-term limit rule for their contributions and work in the party and presented plaques to Deputy Prime Minister Bülent Arınç, Köksal Toptan and Mehmet Ali Şahin who served as speakers of Parliament and are now subject to the three-term rule. AK Party regulations allow members to serve three terms as deputies at most.

As the ruling AK Party continues its candidate designation period ahead of the June 7 general elections, Davutoğlu said that those AK Party members who are subject to the party's self-imposed three-term limit may continue to their duties after a one-term hiatus. More than 70 senior deputies of the AK Party will remain outside the Parliament after 2015, in accordance with the three-term rule.

"They may continue their duties, or they may exert efforts in different fields of [the AK Party's] case. [The three-term rule] is a rare principle around the world," he said, adding that some circles expectat that those AK Party members subject to the three-term rule would trigger chaos in the party, but all the party members have adopted a dignified attitude.

The three-term limit rule, which prevents a politician from running for a fourth consecutive term, was introduced by the AK Party and the then prime minister and current president, Recep Tayyip Erdoğan, who claimed that it was an effort to allow the continuation of younger generations to take over Turkish politics.

Renowned AK Party figures, including Arınç; the deputy prime minister responsible for the economy, Ali Babacan, AK Party Deputy Chairman Mehmet Ali Şahin, AK Party spokesman Beşir Atalay, Energy and Natural Resources Minister Taner Yıldız, Labor and Social Security Minister Faruk Çelik, Justice Minister Bekir Bozdağ and many more in the party cabinet and administration will part their ways with the party due to reaching their three-term limit.While it is estimated that nearly two- thirds of the current parliamentary cadre will be changed after the June elections due to the rule, Davutoğlu and the election committee are in an intensive working period to designate upcoming deputy candidates. The party's election committee held talks with deputy candidate nominees and a new list of those who applied for deputy candidacy has been prepared while Davutoğlu is also expected to have talks with nearly 150 candidate nominees designated by the party's election committee before the party submits the candidate list to the Supreme Election Board (YSK) on April 7.

Ahead of the elections for which all parties are stepping up their preparations, the latest poll submitted by Atalay to the prime minister said that the voting rate for the AK Party is between 48 percent and 50 percent, while support for the main opposition Republican People's Party (CHP) is around 23 percent to 25 percent. The National Movement Party's (MHP) voting rate is at between 13 to 15 percent and the support for the Peoples' Democratic Party (HDP) hovers around the 10 percent election threshold, but seems likely to achieve only 8 to 9 percent of the vote according to the survey.

The AK Party election campaign will focus on unity and brotherhood across the country. The main agenda of the election manifesto is expected to be a new constitution and presidential system as the wide range of deputy candidates representing different religious groups, ethnic origins and languages will be in the candidate list. Davutoğlu is holding talking with some influential figures in provinces that opposition parties have the upper hand in areas such as the western provinces of İzmir and Aydın and southeastern province of Diyarbakır, in an attempt to increase the party's votes.

The campaign election song is expected to be in different languages, including Kurdish and Laz. The AK Party's election manifesto is scheduled to be announced on April 15 in an event attended by thousands of political figures, prominent business circles and celebrities. The prime minister will also begin his election rallies in mid-April as he is scheduled to hold rallies in 60 provinces.
Last Update: Apr 01, 2015 10:55 am
RELATED TOPICS