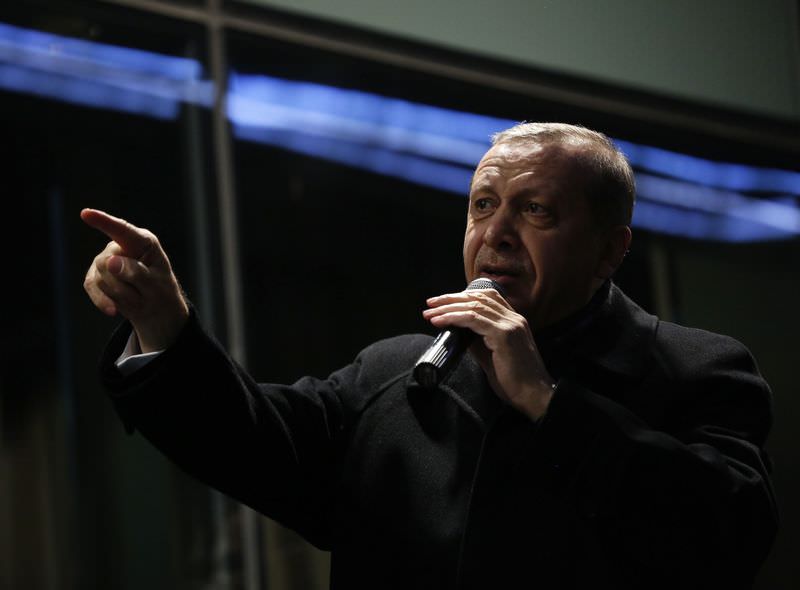 by Daily Sabah Apr 02, 2015 12:00 am
President Recep Tayyip Erdoğan has pledged on Wednesday to take action to enhance the security measures in Turkey after two terrorist attacks occurred for two consecutive days in Istanbul, which have left one prosecutor dead and a police officer injured.

Addressing the crowd outside the slain prosecutor Mehmet Selim Kiraz's house, Erdoğan said, "Those who plan to disrupt the peace in Turkey will not reach their goals but what happened in the last two days at the courthouse and the police headquarters showed us that we must revise the current security measures."

Reminding that the two terrorists had entered the Istanbul courthouse, where security measures are tight, disguised as lawyers wearing attorney robes, Erdoğan said that, "The regulation that rules lawyers and prosecutors cannot be searched should be changed."

On Tuesday, two members of a banned DHKP-C terrorist group killed Mehmet Selim Kiraz, a prosecutor investigating the death of a teenager who was hit by a police gas canister fired during the Gezi protests in 2013, after holding him hostage in Istanbul courthouse for six hours.

A day after the incident, two terrorists carried an attack on Istanbul police headquarters. A female assailant armed with bombs and a gun has been shot dead and the other terrorist was arrested. One policeman was also lightly wounded in the attack.
Last Update: Apr 02, 2015 1:07 am
RELATED TOPICS