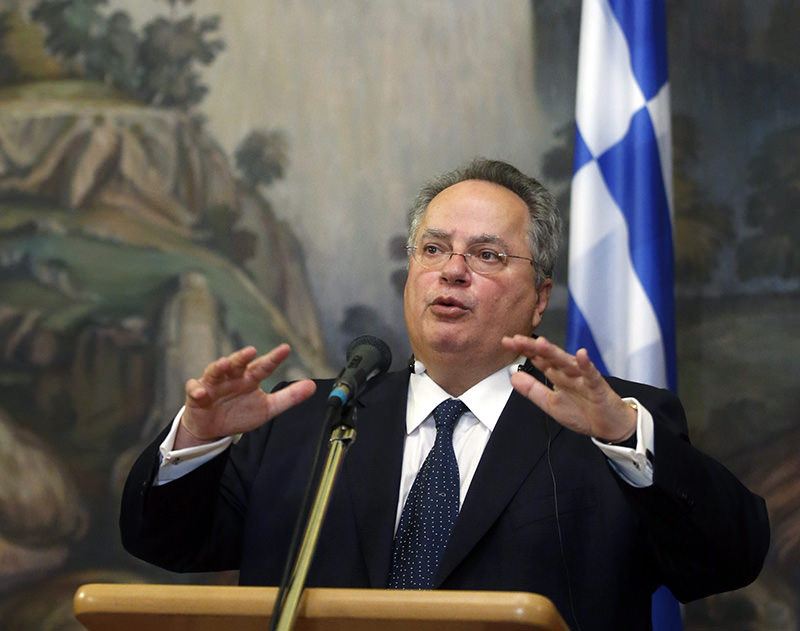 Greek Foreign Minister Nikos Kotzias speaking during a press conference in February (EPA Photo)
by Merve Aydoğan Apr 03, 2015 12:00 am
Regarding recent intelligence reports that have been circulating in Turkish media outlets that claim that the two terrorists, who were killed in a raid at the Istanbul Çağlayan Courthouse on Tuesday after they gunned down Prosecutor Mehmet Selim Kiraz, made a call to senior officials of the Revolutionary People's Liberation Party-Front (DHKP-C) in Greece, the Greek Embassy in Ankara has refused to comment regarding the issue, and the Greek Ministry of Foreign Affairs declined to answer questions when called. While reports in various media outlets indicate that phone calls were made to Agonas, a Greece-based daily published by the terrorist organization's members, for a lengthy period during the hours of the hostage taking, Greek officials refrained to comment or clarify the DHKP-C's existence or activities in Greece to the Daily Sabah on Friday.

As the DHKP-C's ties in Greece raise questions, there have been previous reports on the organization's deep structure that has been established in Greece. In late 2012, several media sources claimed that the DHKP-C signed a protocol agreement with intelligence officials in Greece that would provide a provision for its militants to receive armed training at the Lavrion Refugee Camp in Greece. In addition to such allegations, sources further indicate that in late 2013, a Greek court rejected the extradition to Turkey of DHKP-C terrorist Mehmet Yayla, who had been captured in July 2013 by Greek security forces while carrying arms and explosives to Turkey. It has also been reported that in early April 2013, Greece released 13 suspected members of the DHKP-C on the grounds that they had not participated in any terrorist attack.

The terrorist organization was planning to relocate its camp in Greece to Georgia prior to the Greek elections due to the previous Greek government promising to shut down the camp; however, once Prime Minister Alexis Tsipras's Coalition of the Radical Left (Syriza) government came to power, the DHKP-C reportedly decided to maintain its existence and continue its activities in the camp in Greece. Additionally, one of the latest reports said that a Greek court handed down light prison terms to DHKP-C members who were arrested for transferring a large number of weapons and explosives to Turkey. Meanwhile, Turkish security forces have continued their clampdown on supporters of the terrorist organization with more than 50 suspects detained in operations on Wednesday throughout Turkey.
Last Update: Apr 03, 2015 7:06 pm
RELATED TOPICS