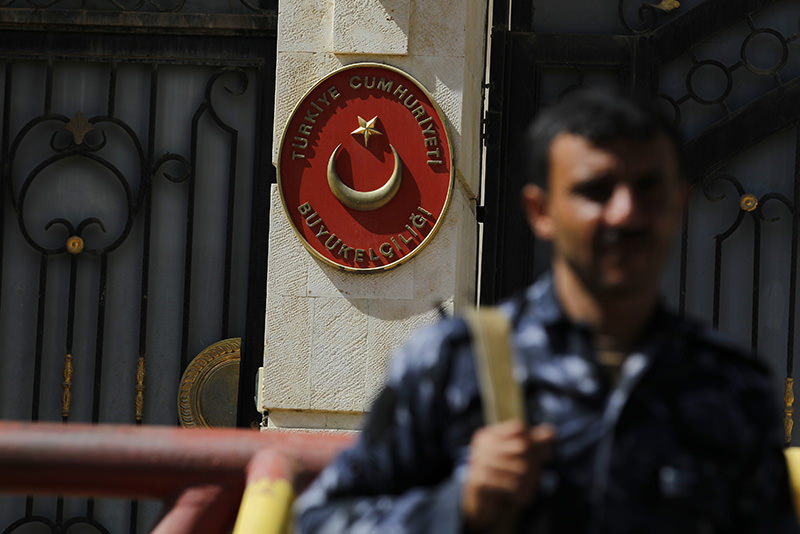 A Yemeni soldier stands guard outside the Turkish embassy after it suspended its operations in Sanau00e2u20acu2122a, Yemen (EPA Photo)
by Anadolu Agency Apr 03, 2015 12:00 am
Turkey's navy has evacuated 55 Turkish citizens from Yemen's port city of Aden, the Turkish Foreign Ministry announced in a statement on Friday.

According to the statement, "The Turkish navy vessel, TCG Buyukada Frigate, has completed the evacuation of 55 citizens from Yemen's Aden city. Our citizens will first land in Djibouti, from where they will be transported to Turkey via Turkish Airlines."

The Saudi Arabia-led military operation, dubbed "Operation Decisive Storm," has launched numerous airstrikes in Yemen since late Wednesday, which has made the situation for Turkish residents in the volatile country increasingly dangerous.

"After the launch of the Saudi-led coalition's military operation in Yemen, we have been conducting a rigorous operation to evacuate our citizens in the country," the ministry added.

Riyadh said that the strikes were in response to calls by Yemeni President Abd Rabbuh Mansour Hadi for military intervention to "save the people from Houthi militias."

Fractious Yemen has been in turmoil since last September, when Shia militants overran the capital Sanaa, from where they are reportedly seeking to extend their influence to other parts of the country.