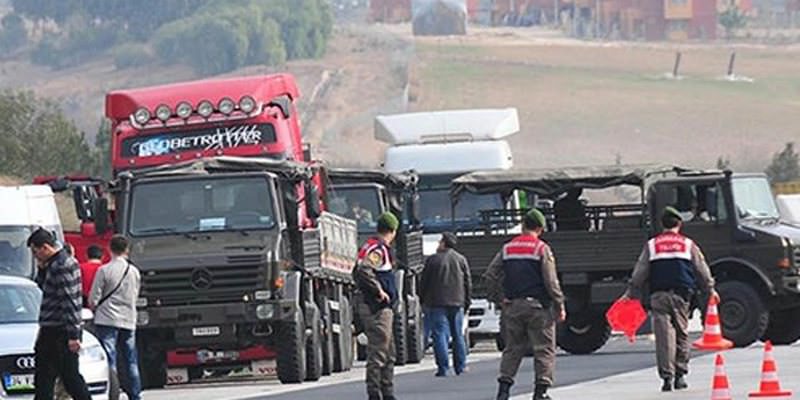 Three more members of the Turkish armed forces have been detained as part of an ongoing "parallel state" investigation in relation to another probe into the so-called "Selam-Tevhid" organization, Istanbul Chief Public Prosecutor has said.

An Istanbul prosecutor has ordered the detention of 34 high-ranking army members, including those who were tasked with stopping and raiding trucks belonging to Turkish intelligence while en route to Syria to carry supplies to Turkmens in January 2014, on charges of spying, in an operation conducted on Sunday. Istanbul Public Deputy Prosecutor İrfan Fidan, who looked into the alleged offense, said 24 of the 34 officers were detained as of Sunday night. Sixteen of the 34 officers were reported to be tasked in the southern province of Adana where National Intelligence Organization (MİT) trucks were intercepted by security forces upon an order by a prosecutor who allegedly acted on a tip-off that the trucks were full of ammunition to be conveyed to a terrorist organization. The operation into the MİT trucks is believed to be a plot by Gülenists to spark a crisis. As more details have been unveiled pertaining to the matter, the possibility that the operation was pre-planned and conducted by Gülenist police and prosecutors in a purported attempt to defame the government, which it considers as a foe, strengthened, prompting the prosecutor's office to investigate the incident.

The detained personnel will be brought to the Palace of Justice after their detention process is completed at the Command Center in Istanbul.

The majority of the suspects in question had lawsuits filed against them on spying charges by the deputy public prosecutor's office, and following the operation the prosecutor who investigated the incident sought 15 to 20 years in prison for the military staffers that were allegedly involved in stopping MİT trucks on January 19, 2014, for "obtaining confidential state information to be used for political and military spying" and life sentences for making them public. The indictment the prosecutor prepared was later submitted to the Adana 7th High Criminal Court where the trial is currently being heard.

Last January, trucks belonging to the MİT and carrying aid to the Turkmens were stopped and intercepted by security forces upon the order of Former Adana Public Prosecutor Özcan Şişman. The supplies in the trucks were seized, and MİT staffers were handcuffed before they were detained, which prompted the Turkish government to reform its intelligence laws in efforts to avoid such situations in the future. The governor of the province was informed about the incident in its latest phase, and many believed the operation was aimed at creating a political crisis via joint efforts by Gülenists and anti-government media outlets that made the incident public, despite its highly confidential status.

As a result of work conducted by the Istanbul counter-terrorism unit of the police department, army members, who are reported to be predominantly commissioned officers, were detained in the provinces where they were on duty in the operation that kicked off early on Sunday. Former Adana Governor Hüseyin Avni Coş spoke to the Daily Sabah on the stopping of MİT trucks and said members of the Gülen movement, who are accused of infiltrating government's key bodies in an apparent bid to topple the government, were behind the incident. He said their purpose was to engender a "state" crisis and the main target was then prime minister, now current President Recep Tayyip Erdoğan. Coş, said it was unacceptable to seize a truck belonging to the state without initially informing the governor, and thereby branded the move as a plot.

"The Doğan News Agency almost broadcasted the incident live at the scene. The pictures of the trucks are posted online. How is a governor not notified about the incident but the media is? The prosecutor says the operation is being carried out in confidentiality but informs a media outlet to make it public. There is no goodwill here. It was an operation to create a perception," Coş said, adding that the operation was conducted by putting aside the laws.

He also said the operation aimed to portray Turkey as a country that transports weapons and ammunition to terrorist organization in the Middle East. "It is hard to comprehend how they linked the incident with a terrorist organization, as there is no mention of any in the tip off," Coş also added.