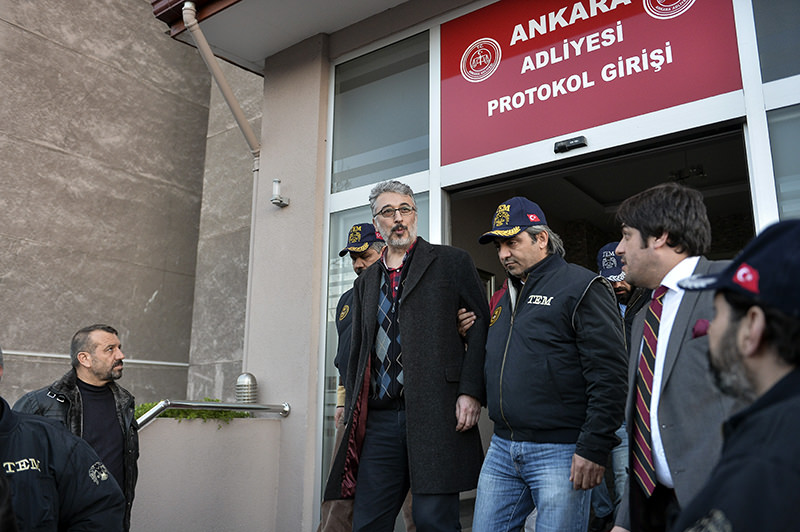 | AA Photo
by daily sabah Apr 07, 2015 12:00 am
Hasan Palaz, the former vice president of the Scientific and Technological Research Council of Turkey (TÜBİTAK) has been arrested once again as part of an investigation into claims of "hiring personnel with a falsified diploma." Palaz was already been arrested for his alleged role in bugging the office of then prime minister, President, Recep Tayyip Erdoğan, which became public in 2012.

Palaz is believed to be affiliated with the Gülen Movement, which has been accused of infiltrating key government institutions in a purported attempt to overthrow the government, and he was arrested last week on charges of preparing a fake report regarding the bugging incident. He was brought to the Ankara courthouse and then taken to prison accompanied by gendarmerie officers. The prosecutor who conducted the investigation took Palaz's statement and referred him to the court demanding his arrest. Palaz was arrested following his interrogation.

Last week, the Ankara 11th Criminal Court of Peace issued the arrest warrant for three officials who face various charges of destroying, concealing or altering criminal evidence and forgery of official documents in a case on the alleged bugging of Erdoğan's office.

The Ankara Chief Public Prosecutor's Office had launched an investigation into the incident after Erdoğan revealed in late 2012 that a listening device had been found in his office and lawsuits were filed against 13 suspects at the Ankara 7th High Criminal Court. In addition to Palaz, among the suspects are police officers Ali Özdoğan, Serhat Demir, Sedat Zavar, Ahmet Turer, Enes Çiğci, İlker Usta, Hurşit Gölbaşı, Seyit Saydam, İbrahim Sari, Mehmet Yüksel, Zeki Bulut and Harun Yavuz. Özdoğan, Zavar, Turer, Çiğci and Usta were also charged with political espionage, violating private life and recording speeches. The suspects are allegedly affiliated with the Gülen Movement, which is accused of carrying out illegal wiretapping activities in an alleged attempt to oust the elected government.

Palaz was allegedly asked to oversee the purported bugging operation of the office by figuring out the timing and length of time it lasted. Palaz reportedly assigned Gökhan Vıcıl and Hamza Turhan to the task and it was later discovered that assessments reported in the document were false and the report was fabricated, which fueled doubts that the suspects were trying to protect members of the Gülen Movement to avoid charges against them. It was also claimed that Turhan and Vıcıl, who were tasked with preparing the report, did not have the expertise to carry out the task. The two suspects in question were detained along with Palaz on Monday for the alleged fabricated report. There were also allegations that scores of people were assigned to TÜBİTAK with fake diplomas at the time Palaz was vice president of the organization.

The arrest warrant for Palaz, Turhan and Vıcıl came after two other suspects in the investigation, Zavar and Usta, who fled to Romania to avoid the charges, were extradited from Romania.

There have been many charges targeting members of the Gülen Movement since their alleged attempt to oust the government became public with the operations they purportedly carried out on December 17 and December 25. They have been accused of trying to topple the elected government by exploiting their authority in key government institutions such as the judiciary, Presidency of Telecommunications and the police, which they had allegedly infiltrated concealing their loyalty to the movement.

The suspects are accused of eavesdropping on top officials and disclosing information of a highly sensitive nature as well as "forming an organization to commit a crime and being a member of this organization," "violating privacy," "illegally seizing personal information" and "forging official documents." Prosecutors are seeking 21 years to 36 years in prison for the suspects.