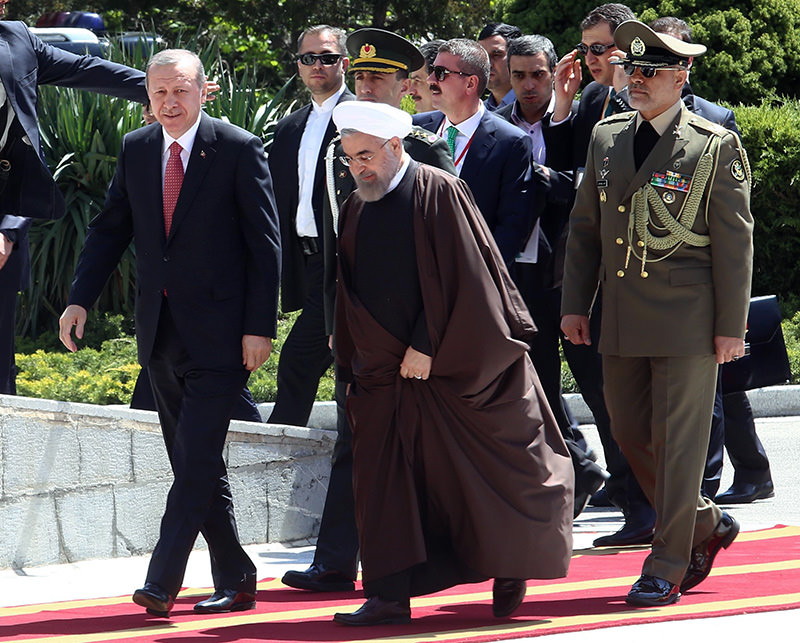 During his highly anticipated visit to Tehran, President Erdoğan called on Iran to take steps in cooperation with Turkey to end bloodshed in the region. Iranian President Rouhani thanked Turkey for its help in reaching a nuclear deal

President Recep Tayyip Erdoğan, speaking yesterday in Tehran, said Turkey and Iran should cooperate to end the sectarian violence in the Middle East. Erdoğan was received by his Iranian counterpart Hassan Rouhani during the official visit and after an hour long meeting spoke at a joint press conference.

"Let's become negotiators to prevent the shedding of blood in the region," Erdoğan said. Adding that he values all human beings equally as the creation of God, he underlined that Turkey does not care about the religion or sect of people who are going through a crisis in the region while emphasizing humanitarian motives to stop the bloodshed. Despite increased tensions between the two neighbors stemming from the two countries' different stances on the crisis in Yemen, the leaders focused on mutual economic ties and ways to further strengthen trade volume. The removal of sanctions imposed on Iran is thought to strengthen socioeconomic ties between the neighboring countries.

Erdoğan also highlighted that Turkey and Iran should overcome obstacles standing in the way of transportation that are caused by bureaucratic oligarchy. Rouhani also conveyed positive messages and thanked Turkey for its support on Iran's nuclear program. He said that they had discussed enhancing border security between Turkey and Iran and reached an agreement on standing against terrorism.

Rouhani paid his first official visit to Turkey as the president of Iran in June. Both countries signed a joint political declaration establishing a High-Level Cooperation Council and signed agreements regarding economic relations, politics, culture, transportation and security.

Tensions have grown between the countries following harsh criticism levied by Erdoğan against Iran regarding the country's regional involvement, leading Erdoğan's visit to become a matter of debate in Iran. Last Sunday, 65 deputies from the Iranian parliament urged Rouhani to censure Erdoğan for his latest statements about Iran. However, Erdoğan said in response that it was Turkey not Iranian deputies who would decide on whether the visit will proceed or not, adding that his Tehran visit will take place as scheduled. He also said Turkey was closely following the developments in Yemen.

The last presidential-level visit to Iran from Turkey took place in 2011 when former President Abdullah Gül paid an official visit to Iran upon receiving an invitation from former Iranian President Mahmoud Ahmedinajad.

Erdoğan has recently said that Iran's efforts to dominate the Middle East are intolerable and their efforts have been disturbing countries such as
Saudi Arabia and Gulf states. He blamed Iran for supporting Syrian President Bashar Assad, saying that a foreign policy that sides with the killer of 300,000 people in Syria cannot be accepted.

Erdoğan also said the conflicts in the region and Yemen have evolved into sectarian battles and urged Iran to withdraw. "Iran has to change its view.

It has to withdraw any forces, whatever it has in Yemen as well as Syria and Iraq, and respect their territorial integrity," he said.

"Iran's aim is to increase its influence in Iraq. The country is trying to chase ISIS [the Islamic State of Iraq and al-Sham] from the region only to take its place," he asserted while expressing support for Saudi Arabia's military intervention in Yemen. He said Turkey could provide logistical support for the Saudi operation against the Iranian-backed Houthi rebels.

Former Yemeni President Ali Abdullah Saleh, who resigned in 2012 following a year of nationwide protests, is accused of allying with the rebels, relying on the loyalty of the many army units that he built during his three-decade rule.
Last Update: Apr 08, 2015 11:46 am
RELATED TOPICS