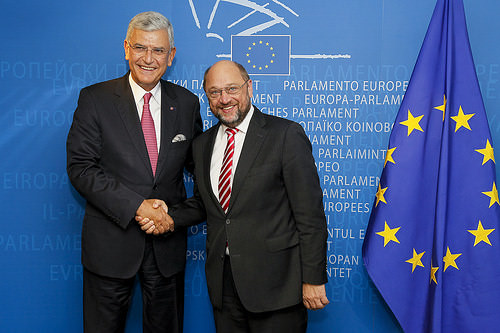 The group, which has already met with some officials and is scheduled to meet President Recep Tayyip Erdoğan and Prime Minister Ahmet Davutoğlu in separate meetings, will focus on Turkey's European Union accession process and other matters concerning the country. Bozkır said that Schulz had expressed contentment over the talks held thus far, which he hoped would be beneficial for both sides.

Bozkır held talks with Schulz and Brasseur on Wednesday during which they exchanged views on various topics concerning Turkey. Bozkır, who recognizes Schulz as a significant figure in European politics, said that he was a friend of Turkey and that he hoped the talks would be of interest to both parties.

Underscoring that the visit is of strategic importance, Schulz said he was happy to be in Turkey. He said that the talks will cover topics such as the improvement report of Turkey in its EU bid and that other matters pertaining to developments in Turkey will also be on the table.

Turkey applied for EU membership in 1987 and accession talks began in 2005. Turkey is expected to conclude negotiations with the EU on 35 policy chapters to be granted membership in the bloc. The chapters include reforms and the adoption of European standards, 14 of which have been opened thus far. Seventeen chapters remain blocked and four others are waiting to be opened to discussion.

Bozkır also said they attached importance to the European Council and its parliamentary assembly during the talks with Brasseur.

Brasseur praised Turkey's committee in the Parliamentary Assembly of the Council of Europe for being active.

Schulz and Brasseur along with a committee have already met with main opposition Republican People's Party (CHP) Chairman Kemal Kılıçdaroğlu and Peoples' Democratic Party (HDP) Foreign Minister Mevlüt Çavuşoğlu during their visit to Turkey. The meetings were closed to press. Erdoğan and Davutoğlu are also expected to hold talks with the duo during the visit.

After his meetings with officials, Schulz will reportedly hold a press conference at the Delegation of the European Union.
Last Update: Apr 09, 2015 10:56 am
RELATED TOPICS