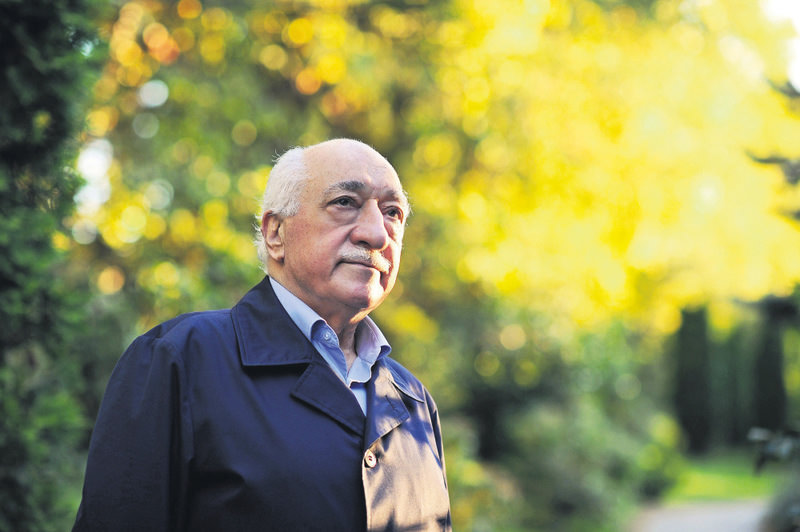 Fethullah Gu00fclen heads the Gu00fclen Movement whose followers are accused of infiltrating key posts in the police and judiciary to attempt to overthrow the government.
by Daily Sabah with AA Apr 09, 2015 12:00 am

Turkish prosecutors filed an indictment on Thursday against seven suspects linked to the Gülen Movement on charges of ‘membership of a terrorist organization.' The movement, accused of covert activities to overthrow the government, was named as the ‘Fethullahçı [Gülenist] Terrorist Organization' for the first time

The chief prosecutor's office in the capital Ankara has filed an indictment against seven suspects including four policemen on charges of membership of "Fethullahist [Gülenist] terror organization."

Suspects accused of affiliation with the controversial Gülen Movement, headed by U.S.-based cleric Fethullah Gülen, are accused of feeding information to a criminal gang leader about police operations beforehand. They are also accused of attempting to weaken law enforcement by plotting to show them as unsuccessful in the absence of Gülenist officers.

The indictment stems from charges of undermining the state's functions and based on the theft of a police car from the Ankara unit of Turkish National Police's organized crime unit, as well as handing over official documents and materials to a criminal organization.

The Second Heavy Criminal Court of Ankara accepted the indictment that underlines that suspects aimed to prevent their organization from being uprooted, attempted to show the state was dependent on Gülenists, exact revenge on the government and attempted to portray the replacement of Gülenist officers within law enforcement as ineffective.

Two police officers are accused of stealing the car of a police officer from the Organized Crime unit and selling it to Kadir İnan. The incident was revealed after an anonymous tip-off last August. The indictment says suspects also stole confidential documents regarding gangs, radio codes and personnel information found in the car and handed them to criminal organizations "for political reasons." The plot aimed to show that the state institutions were weak, according to the indictment.

Seyyit Akşit admitted that the car was stolen with the purpose of carrying out an act of terrorism. Akşit was working in a police unit tasked with surveillance and the indictment claimed he would not be assigned to the unit if he was not a Gülenist as "members of the organization held posts in critical positions in General Directorate of Security."

The indictment goes on to say that suspects were acting together and media outlets linked to the Gülen Movement attempted to portray the investigation as "a plot against the Hizmet (Service) Movement," the name Gülenists named their group.

According to prosecutors, concrete evidence is present pointing out the existence of a terrorist organization as "it has a goal, hierarchy, a communication network" and attempted to establish "a parallel state" and impose "political pressure and pressure through terrorism" to achieve its goals. It said that the organization formed a parallel state to take over the state's sovereignty and persuaded the followers of a religious congregation and exploited them to achieve its goals.

Nebil Ark is named as the leader of the group of suspects and named as "a brother," a name attributed to senior Gülenist leaders. "Suspects had a chain of command and planned to weaken law enforcement. To this extent, Akşit stole official documents and handed them to criminal gangs. This effectively obstructed numerous investigations into organized crime. Akşit also stole a state-property radio and handed it to the leader of a criminal gang and enabled the gang to tap into police radio and evade the capture of gang members," the indictment said. Theft of the police car was also carried out so that "the police (after the purge of Gülenist officers) would be depicted as weakened."

The suspects were also accused of planning to carry out a bomb attack at the server room of the organized crime unit in Ankara in order to destroy evidence against the criminal gangs, but they cancelled the plan when Kadir İnan, tasked with retrieving explosives to be used in the attack, refused to take part.

Ali Dilekli, a former police officer, told the interrogators that Seyyit Akşit planned the theft of car. He claimed Akşit told him that he would blackmail (non-Gülenist) police chiefs or "turn to illegal means" to suspend them from duty. He further claimed that Akşit used to erase wiretapping tapes implicating several gang members in exchange for money and he was a member of an organization "with an access to all sorts of confidential information, an organization resorting to blackmail and threat to intimidate police officers not linked to the (Gülen Movement)."

Seyyit Akşit denied the charges and claimed Kadir İnan threatened and forced him to carry out the theft and hand him over the confidential documents. He blamed Ömer Aydın, another suspect, for membership of the "parallel state," and claimed the presence of several Gülenists in the organized crime unit in Ankara. Akşit claimed Nebil Ark was a "big brother" and his orders were carried out by Gülenist police officers.

The Gülen Movement already stands accused of attempts to overthrow the government in a string of cases involving police officers and other Gülenist infiltrators in law enforcement, judiciary and several state agencies. Cases include widespread illegal wiretapping carried out by Gülenists on high-ranking government officials.

An investigation by Istanbul police announced in February has named Fethullah Gülen as the prime suspect in a "parallel state" case. The parallel state, a term often used by the government to describe the shady network of Gülenists, is claimed to aim at overthrowing the government. February's investigation was a landmark case, as it was the first time that the broad definition of parallel state was confined to the "Fethullahist Terror Organization." A summary of proceedings by the police had stated that the organization, through illegal wiretapping and surveillance used for blackmailing purposes, aimed to gain access to key posts in Turkey's constitutional establishments, security agencies, administrative and judiciary bodies. It also defines the Gülen Movement as an organization engaged in a covert war to overthrow the government.