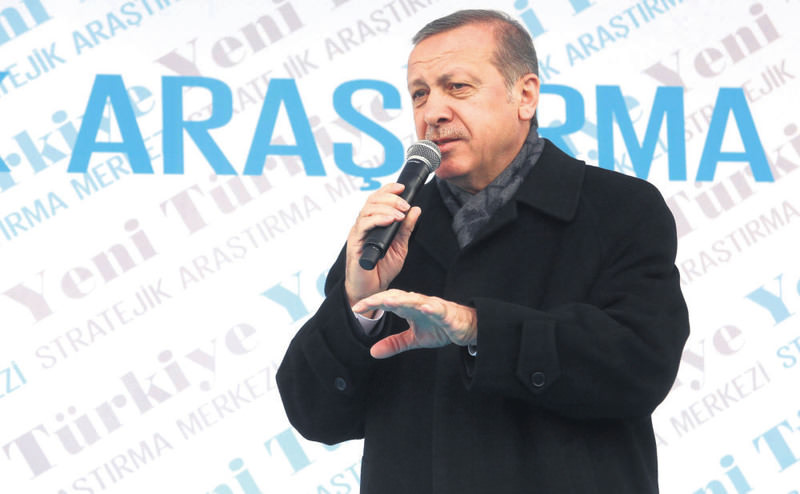 by daily sabah Apr 10, 2015 12:00 am
President Recep Tayyip Erdoğan said on Friday that the government's target should be to convert all provinces to metropolitan cities as part of his vision of a new Turkey. The notion, which was coined by Erdoğan in his reference to the improvement Turkey has gone through in terms of economics, politics and social issues, constitutes Erdoğan's dream of bringing the country to a higher level. Erdoğan says Turkey needs to go through a transformation regarding its administration in order to adapt to global changes and introduce further innovations, which is also a major part of the plans concerning a new Turkey.

Speaking at the inauguration of the New Turkey Strategic Research Center on Friday, Erdoğan talked about how his vision of a new Turkey has evolved since he came to office in 2002, and said he became a laughing stock when he first came up with the idea that all districts should be included in metropolitan cities.

Erdoğan has been focusing on what he calls a new Turkey in reference to the progress Turkey has made. Economic improvements, the reconciliation process the government launched in a bid to end Kurdish conflict between the PKK and the state all contribute to his vision of a new Turkey. He also underlined the necessity of change in the Constitution for adapting to the norms of a new Turkey. He has claimed that the current parliamentary system has been a hindrance for the efficient execution of policy and that a shift to a presidential system is necessary to adapt to global changes.

When Erdoğan took the presidential office on Aug. 10 last year, with the nation directly electing a president for the first time, he specifically highlighted that he intended to change the political structure. Currently, the president only has ceremonial duties, but Erdoğan pledged to be a more active president during his tenure. The Justice and Development Party (AK Party) reiterated that it aims to receive the constitutional majority to establish a presidential system.

Erdoğan had previously accused the Republican People's Party (CHP) and Nationalist Movement Party (MHP) of being opposed to a new Turkey. "They already know that they are going to lose [in the Aug.10 presidential election]," he said. Speaking of the AK Party's 2023 "New Turkey" vision, Erdoğan said that the government will establish a new Turkey together with the support of the nation. He asserted that the actors of the old Turkey are annoyed with his vision for a new Turkey, which has been on the AK Party agenda since its establishment.
Last Update: Apr 10, 2015 11:11 pm
RELATED TOPICS