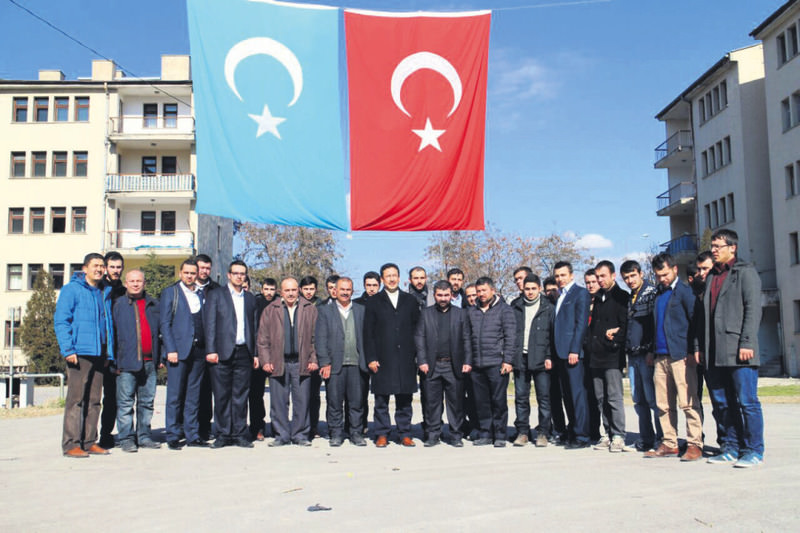 by Merve Aydoğan Apr 10, 2015 12:00 am
Uighurs who were forced to seek refuge due to the Chinese government's religious, cultural and language restrictions as well as ethnic discrimination policy faced a smear campaign by several Turkish media outlets that are associated with the Gülen Movement.

In efforts to harm Turkey and the ruling Justice and Development Party (AK Party) government, fabricated Gülenist media reports claimed that the Islamic State of Iraq and al-Sham (ISIS) was given more than 100,000 fake Turkish passports under the government's authorization and these passports were used by Uighurs escaping to Turkey to enter Syria and join ISIS.

The relentless smear campaign against the Uighurs, who seek asylum in Turkey in efforts to start a new life, continued by adding that "nearly 50,000 Uighurs who had come to Turkey with fake passports from China via Thailand and Malaysia hadd entered Syria after staying a day in Istanbul." Dr. Erkin Emet, a professor at Ankara University's Department of Modern Turkish Dialects and Literature who focuses on Central Asia, commented exclusively to Daily Sabah regarding the claims. Emet said that it is "shocking and deeply upsetting to see such a smear campaign against a group of people like Uighurs" who have been identified as oppressed by the Chinese government and who continue to suffer the systematic violation of social, political, and human rights. Uighur's migration to other countries began in 1949 with China's invasion of East Turkistan, also known as the Xinjiang Uyghur Autonomous Region of China, in eastern Central Asia.

"Nearly 1,800 Uighurs first migrated in 1949, via Afghanistan to Turkey. Such migration of Uighurs have continued until today, however in 2009 following the July 2009 during riots in Urumqi in which the official figures from the Chinese government claimed 600 died, but the World Uyghur Congress puts far higher, disputing the government claims, the number of those escaping from Chinese violence has increased," Emet said. Emet, who has lived and taught at a university in China for a long period of time, continued that it is solely baseless to claim nearly 50,000 Uighurs have fled to join ISIS, as it is highly impossible and that they are escaping from violence and seeking refuge to live in a warzone.

According to the data released by the European Union's law enforcement agency, Europol, it is estimated that there are between 10,000 and 12,000 foreign fighters in ISIS, and while there are a number of suspects from Germany, the U.K., U.S., Russia and other countries aiming to join ISIS, Emet said it is possible for some Uighurs to also join the terrorist organization.

"Such motives for that small amount of Uighurs to join ISIS is caused due to the Chinese government's radicalization of Islam and also due to the bans against practicing religion," said Seyit Tümtürk, the vice president of the World Uyghur Congress and president of the People of East Turkestan Association. In regard to Uighurs who have been placed in lodgings allocated for them in the central Anatolian province of Kayseri, Tümtürk said a group who was perceived as conservative, referring to the Gülen Movement, to propagate such baseless claim in both Turkish and international media is "devastating."

He continued his remarks by emphasizing that the Gülen Movement, through propagating these claims, "has placed its signatures under a great tyranny."

Turkey, which strongly supports and propagates a policy for the oppressed, had previously expressed its stance on hosting Uighur asylum seekers when they officially requested Thailand send 367 Uighur refugees to Turkey and not back to China where they could face possibly death upon return. Among the 500 who arrived in Turkey were also some who broke free from a human smuggling camp in Thailand. Tümtürk said: "Turkey, which has opened its doors to 1.5 million Syrians and Iraqis, will surely host our brothers from East Turkistan." He has also added that in efforts to harm the reputation of Turkey and to damage the government, it is a great disappointment. "Those who claim to be conservative are now siding with the oppressor to damage Turkey," Tümtürk added.
Last Update: Apr 10, 2015 11:13 pm
RELATED TOPICS