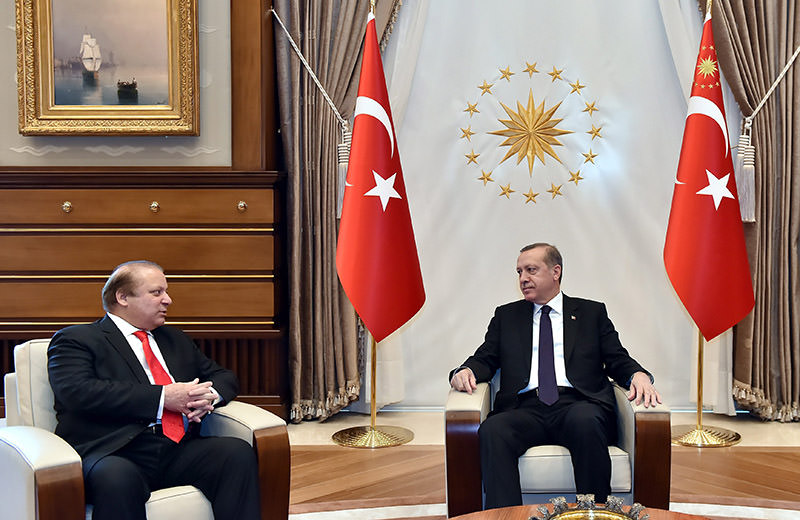 | EPA Photo
by Daily Sabah with Wires Apr 11, 2015 12:00 am
President Tayyip Erdoğan discussed the Yemen crisis with Pakistan Prime Minister Nawaz Sharif in a telephone call on Saturday, a day after he held similar talks with the Saudi king and the emir of Qatar.

Turkey has publicly supported Saudi Arabia and its Gulf allies against the Iran-allied Houthi insurgents in Yemen. Sunni-majority Pakistan voted on Friday not to join the campaign although it remains a staunch Saudi ally.

Over a 45-minute phone call, the two officials decided to intensify efforts in a move to peacefully resolve the worsening situation in Yemen, where a Saudi-led coalition has been pounding the positions of the Shiite Houthi group since March 25.

Fractious Yemen has remained in turmoil since last September, when the Houthis overran capital Sanaa, from which they have sought to extend their influence to other parts of the country.

The Pakistani Prime Ministry Office also said in a statement that the two leaders agreed that the Houthis did not have any legal right to topple a legitimate government in Yemen. In case of any violation of Saudi Arabia's territorial integrity, both Turkey and Pakistan will show a "strong" reaction, the press release added.

The Saudi-led coalition says the campaign is in response to appeals by embattled President Abd Rabbuh Mansour Hadi – now in Saudi Arabia – to "save the [Yemeni] people from the Houthi militias." The Houthis, for their part, decry the offensive as unwarranted "Saudi-American aggression" against the Yemeni people. Some Gulf States accuse Shiite Iran of supporting Yemen's Houthi insurgency.

The chaos in Yemen was one of the main issues discussed during Erdoğan's visit to Tehran last week. "Regional countries that have an influence to shape developments are known to all. Turkey, Saudi Arabia and Iran. We want something to be done. It is important to make all relevant groups that represent the people sit at the same table so that they can discuss certain common grounds and reach a political solution. Turkey, Saudi Arabia and Iran should push for such a negotiation process. Iran and Saudi Arabia are warm towards such a deal," he told journalists while returning back to Turkey on the presidential plane.

He said the Saudi Arabian Crown Prince Muhammad bin Nayef was in Turkey recently and he had agreed with Turkish efforts to find a common ground between the sides in Yemen. Iranian authorities were given written and verbal briefings on Turkey's position in Yemen. The foreign ministers of the two countries would be continuing the discussions, he said.

Turkey, which has the second-largest army in the NATO military alliance, has not taken an active role in the operations in Yemen so far, although it has said it is able to offer logistic and intelligence support.