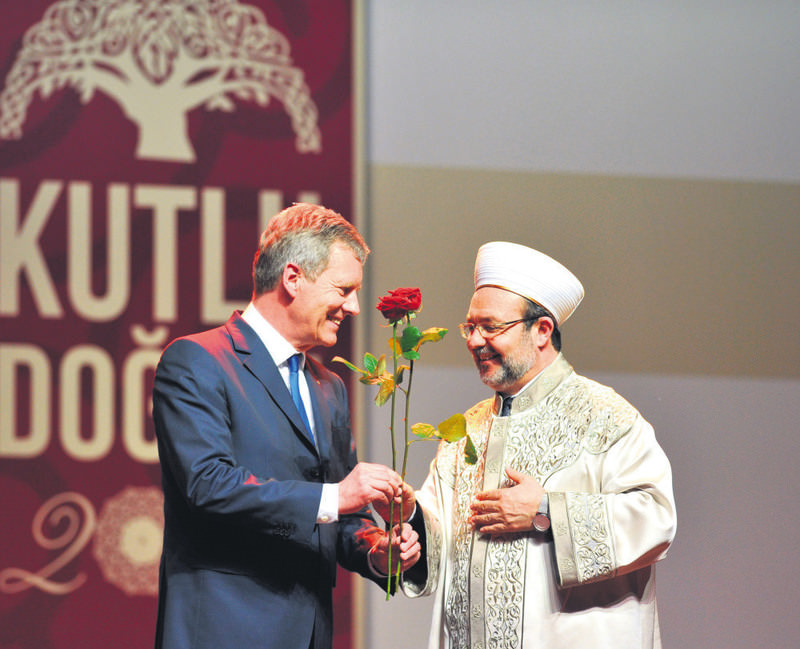 While Europe experiences a dramatic increase in Islamophobic attacks and support for far-right movements, the head of Turkey's top religious cleric, Mehmet Görmez, while in Cologne, expressed his regret that mankind is failing to manage multiculturalism

The head of the Presidency of Religious Affairs, Mehmet Görmez, has said that in today's world all religions, beliefs and cultures are intertwined and mankind is failing to manage this multiculturalism. Speaking at an event to commemorate Prophet Muhammad's birth called the Week of the Blessed Birth in the Lanxess Arena in Cologne, Germany on Saturday, Görmez said that peaceful coexistence between different religions is possible when people become able to understand the love of God and manage to transform this love into social peace and justice.

"Prophet Muhammad and the ethics of coexistence" was chosen as the main theme for all the events for the commemoration. Accordingly, delivering a speech about the life of the prophet and the morality of living together to the 19,500 people in the fully packed arena, Görmez said that understanding of Prophet Muhammad and his call for peace and mutual respect would be a solution to solve all religious conflicts. "Islam means respecting God and his creation and all to live in peace," he said.

In his speech, Görmez thanked the priest and cardinals of the Cologne Cathedral who had switched off the lights of the cathedral as a way of warning the far-right movement Patriotic Europeans Against the Islamization of the West (PEGIDA) supporters that they were supporting extremists. "I greet with all my heart the people of Germany who stood up against [discrimination]. We have the kindness that has been revealed to us on the earth be revived," he said.

Addressing Muslims who live in Europe, Görmez said: "You are no longer migrants," and added that in order to represent Islam in the best way, Muslims have to create assets that benefit the whole of society. "In this way you can eliminate Islam from the negative image that has been attached to it," he said. Saying that, as man of God, they are the representatives of mercy, Görmez also made two recommendations for the protection of coexistence – forgiveness and asking forgiveness. "He who does not forgive, does not know how to ask for forgiveness," he said.

Former German President Christian Wulff also spoke at the event. Calling on the Muslim community to stand up against the exploitation of Islam by terrorist groups, Wulff underlined the importance of working together against extremism. "Do not let it be that your peace-loving religion is abused for inhumane and violent purposes. Let us work together to make religions not be a bone of contention in the world," Wulff said. He praised the peaceful coexistence between Christians, Muslims and other religions in Germany. "Islam is an asset to the German society, the same is true also for Christians in Turkey," he said.

Referencing the numerous crises in the world, Wulff said: "You have to stand by each other in order to get out of the crisis. We cannot allow there to be millions of refugees." Wulff emphasized the similarities between religions, to do good in the world and to have to account for one's deeds and mercy.

Hüseyin Avni Karslıoğlu, the Turkish ambassador to Germany, who had spent his childhood in Germany, was touched by the atmosphere of the event and said: "I had not experienced something like this event in my childhood," He described the period of deprivation in his childhood and showed his joy at the development of Muslims in Germany. He thanked Germany as a place with a culture of coexistence and such events. He addressed Görmez and all Muslim organizations: "Our job is to pass this tolerance of coexistence on to future generations," and that Muslims, Christians and Jews should learn from each other for a culture of coexistence.

The celebration of the birth of Prophet Muhammad is celebrated throughout Europe with a series of festivities.
Last Update: Apr 13, 2015 10:31 am
RELATED TOPICS