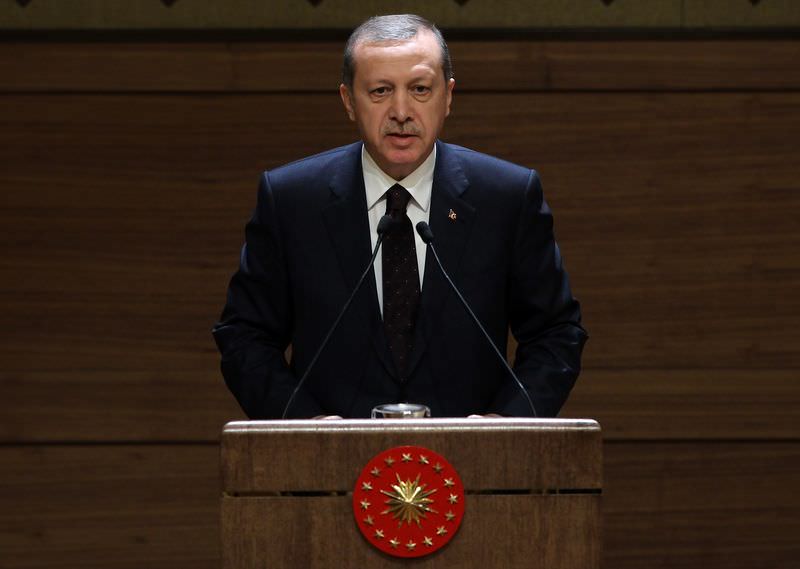 President Erdoğan responded to pressure on Turkey for not defining the 1915 incidents as genocide with indifference, saying the matter became overly politicized. He also said there are currently 100,000 Armenians living under good conditions in Turkey

President Recep Tayyip Erdoğan on Wednesday rejected any possibility of Turkey caving in to pressure over Armenian and Western efforts to label the 1915 incidents – which Turkey describes as a mass forced deportation of Armenians from Anatolia during World War I – as "genocide," given their highly political causes. Erdoğan said since Turkey hosts nearly 100,000 Armenian nationals in peace and provides them with scores of opportunities, there is no grounds for it to be exposed to such pressure. As the Armenian diaspora ratchets up pressure on Western countries to label the 1915 incidents as "genocide," experts believe the recognition of the incidents as a genocide will bring no gains in terms of ameliorating sour ties with Armenia. Turkey has suggested various solutions to resolving the definition problem, which has purportedly become a political tool exploited by the diaspora, by unveiling its historical archival resources to shed light on the matter, which is often appraised in a biased and one-sided manner. Referring to the European Parliament (EP), which is to vote on a draft resolution that recognizes the incidents as genocide, Erdoğan said he will receive it with indifference since he is confident on how well the nearly "100,000 Armenians" are treated in Turkey.

Erdoğan firmly rejects the definition of the 1915 incidents as "genocide," and deems the attempts of Armenians to label them as such to be trivial so long as Turkey is hosting 100,000 Armenian citizens and non-citizens by reinstating their rights, which have been taken from them since the founding of the Republic. Ankara has already put into practice policies like the returning of confiscated properties, the assigning of bureaucrats of Armenian origin and bringing life back to their places of worship as part of its democracy initiatives. These policies undermine the efforts of the Armenian diaspora, Armenia and other Western countries, however, which have taken the 1915 issue to their parliaments with the aim of isolating Turkey.

On Wednesday, the EP issued a draft resolution urging EU member states to recognize the events in Armenia and Ottoman territories in 1915. In response to the move, Erdoğan said: "I don't know what decision they have made or will make, but there is something that I know: Why our nation or the media acts so defensively over the matter, which is hard for me to understand. I don't have any concern to defend [Turkey] as the President," Erdoğan said, confident that the genocide accusations levied at Turkey had not been committed by his ancestors.

He added: "I have nearly 100,000 Armenians in my country. Has there been any wrongdoing to our Armenian citizens, or ill treatment? We have been hosting those who are using every opportunity provided to them by our country [with content]."

The government has been exerting major efforts to normalize the conditions for minorities, which includes Armenians, by giving back their rights and doing away with discrimination they have long faced after decades of apathy. Within the context of reforms toward different faith groups in Turkey, 1,014 confiscated foundation properties have been returned and more have been promised.

Recalling that the expenses of the restoration and renovation works of the Armenian Orthodox church on the island of Akdamar in Van Lake were paid for with state funds, Erdoğan said that Divine Liturgies are currently being celebrated at the church. He also said that such similar demands were being responded to by the state and added that it was "so wrong" to show such an attitude to Turkey despite such favors.

"I do not know what kind of a resolution the European Parliament will adopt, but for Turkey, it will surely go in one ear and out the other," Erdoğan was also quoted as saying before he departed for his two-day visit to Kazakhstan on Wednesday.

Turkish officials have been exerting considerable efforts to improve relations with Armenia. Erdoğan also made an attempt to thaw tensions between the two countries by issuing a message ahead of the 99th annual commemoration of the 1915 incidents last year. In an unprecedented move, while he was prime minister, Erdoğan extended condolences to the grandchildren of Armenians who lost their lives in the 1915 events.

However, Armenian President Serzh Sargsyan, in a purported refusal to reconcile with Turkey, said he had withdrawn the peace accords with Turkey from parliament. The two countries' then foreign ministers, Ahmet Davutoğlu and Eduard Nalbandyan, had signed protocols to establish diplomatic ties between their respective countries in 2009 in Switzerland. Mediated by the U.S., the protocol had presupposed the opening of the border between Turkey and Armenia, but it failed to be ratified.

Following the incident, Erdoğan complained that Armenia had failed to reciprocate Turkish peace efforts, but said that Ankara will still pursue a settlement with Armenia. Foreign Ministry Spokesman Tanju Bilgiç also said: "Turkey will remain committed to the normalization process it pursues as the main purpose of the protocols."

The official government stance on the claims of genocide is that it acknowledges that a tragedy occurred with great suffering on the part of the Armenians, but that Muslim Turks also suffered during the event. They have repeatedly called on Armenia to check unbiased historical sources to bring the matter to light.