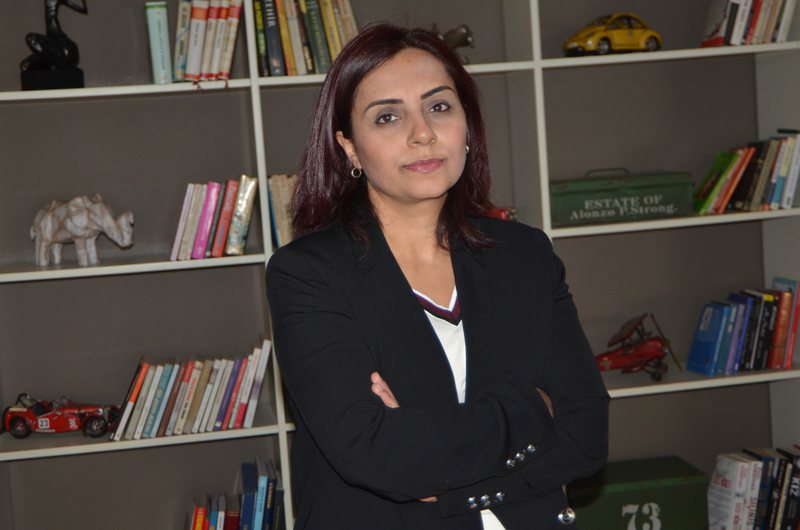 by Mehmet Çelik Apr 16, 2015 12:00 am
The main opposition Republican People's Party (CHP) candidate in Istanbul's second electoral district, Selina Doğan, has made controversial remarks regarding the so-called Armenian "genocide" claims, saying that she will be in Taksim Square on April 24, which implies that she will attend the gathering organized by the Armenian community in Turkey to call for recognition of the 1915 incidents as "genocide." Doğan's remarks have caused intra-party tension among members of the CHP.

"The victimization continues. As long as politicians continue denial, this victimization will not end," said Doğan, who is of Armenian descent, in an interview with Al Jazeera.

Doğan refused to make a statement labeling the 1915 incidents genocide during her Al Jazeera interview. However, her remarks regarding the incidents have been widely criticized by CHP deputies.

CHP Deputy Chairman Gürsel Tekin commented on Doğan's remarks in an interview, saying that they would "never accept" the genocide claims, regardless of the demand and support of their candidate.

Speaking to Daily Sabah, Doğan said that she would not comment on the remarks. However, she will speak on the matter after the elections on June 7.
During a press conference organized to announce the CHP's stance on the genocide claims, the CHP Vice-Chairman in charge of Foreign Relations, Murat Özçelik, said: "Doğan's remarks might have reflected her own opinion. The statement I read by our chairman binds our party. It is the party line and it needs to be followed."

Özçelik added that Armenians must also realize what Muslims went through, and that there should be a relationship based on mutual cooperation and understanding. "If Selina Doğan does not know that, she will also understand it and follow this stance," he added.

CHP Chairman, Kemal Kılıçdaroğlu, also criticized the European Parliament's (EP) adoption of a resolution urging all member states to recognize the 1915 events as genocide, saying that the issues should not be solved through political or religious means, but rather it should undergo thorough historical research.

The CHP issued the statement on Wednesday after the EP adopted a resolution that urges all EU member states and Turkey to recognize the events of 1915 in the Ottoman Empire as the Armenian genocide.

This decision has received harsh criticism from Turkey, as Turkey argues that the decision has been an outcome of pressure that is aimed to isolate Turkey in a highly politicized matter.

Rather than taking a constructive position that would ease the already strained relations between Turkey and Armenia, during a service in Vatican City commemorating Armenians who lost their lives in the 1915 incidents, Pope Francis took a political stance by stating that "The first genocide of the 20th century struck Armenians."

Armenia demands a formal apology and compensation, while Turkey has officially refuted Armenian allegations over the incidents, saying that although Armenians died during the relocations, many Turks also lost their lives in attacks carried out by Armenian gangs in Anatolia.
Last Update: Apr 17, 2015 4:43 pm
RELATED TOPICS