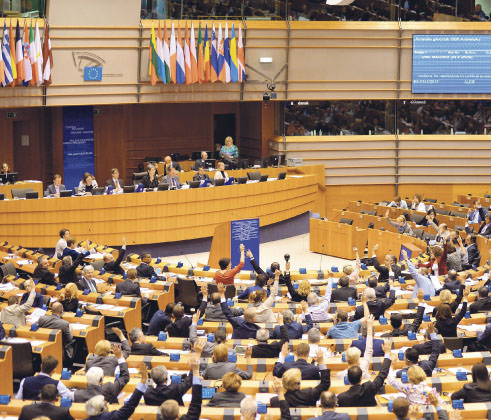 The European Parliament’s decision, which urges Turkey to recognize the 1915 incidents as ‘genocide,’ has fuelled debates over the highly politicized matter, and prompted a harsh response from Turkish officials who firmly reject its validity

The European Parliament (EP) on Wednesday adopted a resolution that urges all EU member states and Turkey to recognize the events of 1915 in the Ottoman Empire as the Armenian "genocide." This decision was repudiated by Turkey due to it being an outcome of pressure that is aimed at isolating the country in a highly politicized matter. Shortly after the decision became public, Turkey's Foreign Ministry slammed the European Parliament's adoption of the resolution and accused the resolution of mutilating history and law.

The European Parliament, known for contriving obstacles to the development of Turkey-EU relations, has aspired once again to rewrite history regarding the 1915 events," said the statement published on the ministry's official website.

The statement also said that the EP had repeated the exact mistake it made in the past, incompatible with international law and exceeding its competence, recalling another resolution passed by the parliament in 1987 that recognized the 1915 events as a "genocide."

"We do not take seriously those who adopted this resolution by mutilating history and law. The participation of EU citizens with a rate of 42 percent in the 2014 elections already implies the place that this parliament occupies in the political culture of the EU," the statement read.

Wednesday's vote came a day after the EU urged Turkey and Armenia to normalize their relations following a spat prompted by remarks made by Pope Francis over the 1915 events, in which he described the killings of Armenians during World War I as "the first genocide of the 20th century."

Turkey and Armenia disagree on what happened during the events between 1915 and 1923, with Armenia saying that 1.5 million people were deliberately killed, and Turkey saying the deaths were a result of deportations and civil strife.

After the parliament's decision, Turkey's EU minister Volkan Bozkır also released a statement, in which he said "Turkey considers the resolution null and void, the decision contradicts historical and legal facts."

"The role of the European Parliament, which represents millions of Europeans, is not to rewrite history, but to provide realistic and lasting solutions to the challenges that we face today in Europe," he said in the statement.

Via a Twitter message he posted on Thursday, Bozkır also called on the opposition to come out and raise their voice instead of "hiding."

"This country belongs to all of us. If there is an attack, we must all take joint action," Bozkır said. Addressing the opposition, he added: "Do not hide, just come out."

Foreign Minister Mevlüt Çavuşoğlu also commented on the decision, saying that "Turkey does not take seriously the resolution that mutilates history and law and those who adopted it," on his official twitter account.

Deputy Prime Minister Yalçın Akdoğan also posted a tweet about the EP decision which read, "You can't discuss serious matters via empty talk. If the EP has an ability, power and a vision, it should give up historical nonsense and adopt a stance on today's matters."

President Recep Tayyip Erdoğan said on Wednesday that whatever decision is made in parliament, he would not take it seriously as he is in no mood to defend Turkey for a "crime it had not committed."

"I do not know what kind of a resolution the European Parliament will adopt, but for Turkey, it will surely go in one ear and out the other," Erdoğan was also quoted as saying before he departed for his two-day visit to Kazakhstan on Wednesday.

Turkish-Armenian relations have remained strained for decades due to Armenia's constant demand for Turkey to officially accept the Armenian claims of "genocide." Tensions peaked in 1993 when Turkey closed its borders with Armenia in reaction to the war in Nagarno-Karabakh and in support of its close ally Azerbaijan.

Nevertheless, last year President Recep Tayyip Erdoğan made attempts to thaw tensions between the two countries by issuing a message ahead of the 99th anniversary of the 1915 incidents. In an unprecedented move, Prime Minister Erdoğan extended condolences to the grandchildren of the Armenians who lost their lives in the 1915 events.

However Armenian President Serzh Sargsyan, in a purported refusal to reconcile with Turkey, said he had withdrawn the peace accords with Turkey from parliament.

The two countries' foreign ministers at the time, Ahmet Davutoğlu and Eduard Nalbandyan, had signed protocols to establish diplomatic ties between their respective countries in 2009 in Switzerland. Mediated by the U.S., the protocol had presupposed the opening of the border between Turkey and Armenia, but it failed to be ratified.

Following the incident, Erdoğan complained that Armenia had failed to reciprocate Turkish peace efforts, but said that Ankara will still pursue a settlement with Armenia. Foreign Ministry Spokesman Tanju Bilgiç also said, "Turkey will remain committed to the normalization process it pursues as the main purpose of the protocols."
Last Update: Apr 17, 2015 11:53 am
RELATED TOPICS