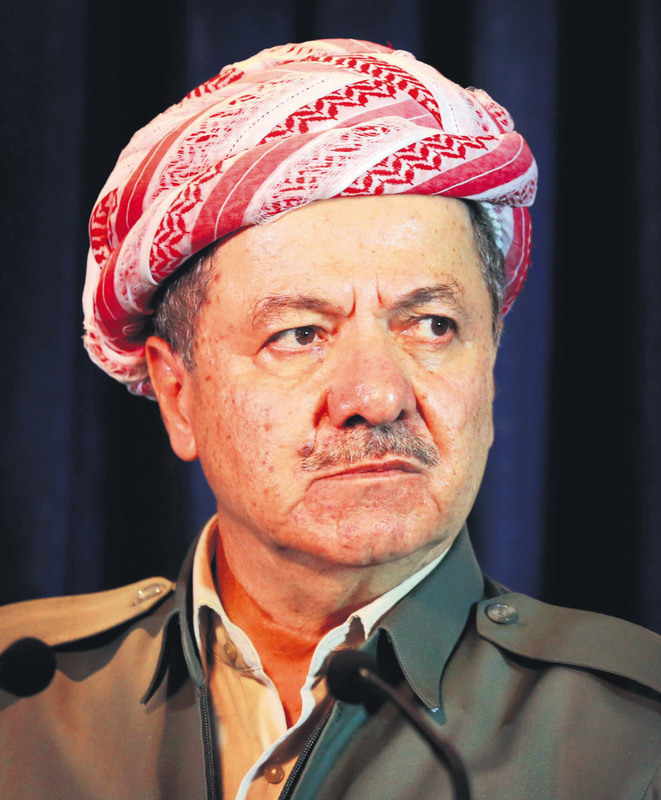 by Sena Alkan Apr 17, 2015 12:00 am
The Kurdistan Democratic Party (KDP) Politburo on Thursday slammed Duran Kalkan, a senior figure in the illegal PKK organization, which took up arms against the Turkish state in the 1980s to carve out a separate state in southeastern Turkey, for his accusation that the Kurdistan Regional Government (KRG) is a dictatorship. A written statement issued by the KDP urged Kalkan and the PKK organization not to go over the line and not to create a disturbance for the Kurdish people.

"With an enemy viewpoint, Duran Kalkan made an inconvenient statement and talked out of turn," read the KDP's press release, describing Kalkan's statement as words that can only be spoken by an enemy of Kurds.

"Someone who is not able to say a word in Kurdish and whose nationality is unknown, has no right to talk about our future and the regime on Kurdish soil. Who is Kalkan and with what rights can he speak about the Kurdish people's future?" quoted the statement lambasting Kalkan's remarks, pointing out that Kalkan is not Kurdish and is not able to speak Kurdish despite all the years he spent as a senior PKK figure.

In an interview published on Kurdish media outler MED NÛÇE, Kalkan said, "Southern Kurdistan cannot be under a central dictatorship." Asserting that there is a security issue in Sinjar, Kalkan said Sinjar needs its own administration, with his remarks causing huge frustration in the KRG administration. "We are attempting to do it, they said 'you are trying to split the administration, you want to be separated from Kurdistan.' No, it is not like that," added Kalkan.

"Kurdistan cannot be central. Southern Kurdistan can never be central. The KDP and the YNK [Patriotic Kurdistan Union] agreed and established the current [administrative] system. And they still insist on [the current system], especially the KDP," added Kalkan.

The statement by the KDP also attacked Kalkan's accusation by saying that the PKK pushed too much to make itself accepted in the KRG region, adding that there is no freedom, political activities or freedom of speech where the PKK has authority. "How can a person [Kalkan] who makes people afraid of dictatorships, violence and pressure speak about freedom?," asked the statement.

The statement also portrayed Kalkan's remarks as malicous against the south and continued by saying: "Those who share the same opinion as him [Kalkan] seek to create a disturbance, while they have nothing good in the north. Kalkan should know that southern Kurdistan is not an easy catch."

The KRG President, Masoud Barzani, also criticized Kalkan's remarks on Thursday by calling on the Kurdish people to not allow those kinds of groups to exist in Kurdistan, and he described those groups as elements purporting to commit treason and cause a civil war within the country.

Asserting that what Kalkan has created is a new way to create hostility toward the KRG, Barzani underscored that the primary objective of these remarks is to create a dual state administration in the KRG area, and it is a betrayal of the nation and its people.

"It is a plan to take over the life of Kurds," said the Iraqi Kurdistan president, adding that Kalkan's remarks are a serious threat to the country.

Also, Barzani urged the Kurdish people not to give PKK-like groups recognition, since it will give them the opportunity to cause conflict within the country.

Duran Kalkan is a member of the executive council of the Kurdish Communities Union (KCK), which is an umbrella organization for the outlawed PKK. The U.S., EU and Turkey list the PKK as a terrorist organization, and it has been responsible for dozens of deadly attacks in eastern Turkey for decades.
Last Update: Apr 17, 2015 9:37 pm
RELATED TOPICS