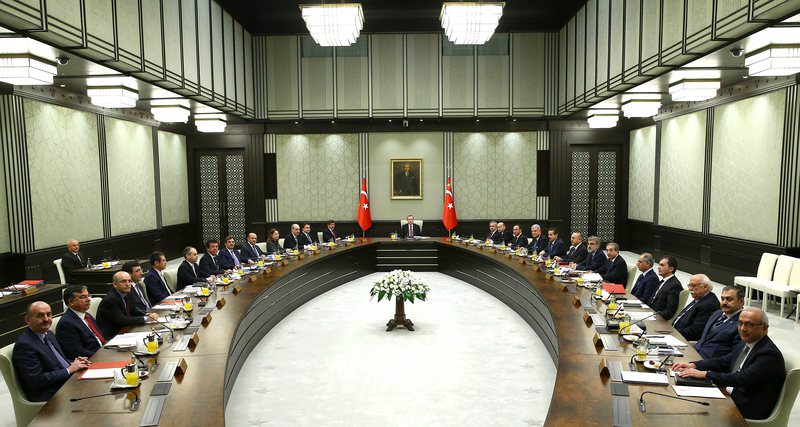 by daily sabah Apr 20, 2015 12:00 am
The third Cabinet meeting chaired by President Recep Tayyip Erdoğan began at the Presidential Palace on Monday morning in which energy, foreign affairs, regional issues and matters concerning domestic security are expected to be on the table. Erdoğan released a statement the same day condemning the attack that was carried out on the headquarters of the Peoples' Democratic Party (HDP) on Saturday. Erdoğan branded the attack as treacherous and assured that such attacks targeting the peace, stability and democracy in Turkey "will not prevail." The Cabinet convened at 11:30 a.m. on Monday morning. Erdoğan chaired the meeting, the third time he has done so as president since he was elected last August.

Apart from the aforementioned issues, the latest developments in the reconciliation process are also expected to be among the issues on the agenda, especially after the recent incident in which PKK militants clashed with the Army in Ağrı province, injuring four soldiers and killing five PKK members.

The commemoration ceremonies of the centennial anniversary of the Battle of Gallipoli will be held on April 24-25 and a high rate of participation at the national and international level in this year's ceremony is expected. The final preparations and the latest reports on the ceremony will also be discussed by the Cabinet.
Recently, an unprecedented power outage hit the country, including the biggest city Istanbul, and the capital Ankara.

Because of this, preventive measures to avoid similar incidents are also expected to be discussed. The steps to be taken to eliminate members of the Gülen Movement from within the state are also among the subject expected to come up in the meeting.

Erdoğan held his first Cabinet meeting as president on Jan. 19, during which he said that there are four main areas in which the Presidency would like to work in harmony – national security, specifically fighting the Gülen Movement; foreign policy; the economy and information technologies.

The second Cabinet meeting he chaired took place on March 9, with the meeting's agenda addressing significant topics such as the reconciliation process, the Domestic Security Reform Package and the recent fluctuations in the value of the Turkish lira.

In response to allegations that Erdoğan's chairing of Cabinet meetings would decrease the powers of the prime minister, Prime Minister Ahmet Davutoğlu said in a recent televised interview that this is not the case and that there would be no changes in the prime minister's or president's powers.

On the same day, Erdoğan released a statement regarding the attack on the HDP headquarters, condemning the assault, which he said targeted the country's peace and democracy.

On Saturday, gunshots were fired at the HDP headquarters in the Çankaya district of Ankara, leaving bullet holes on the signboard and the walls.
Last Update: Apr 20, 2015 9:35 pm
RELATED TOPICS