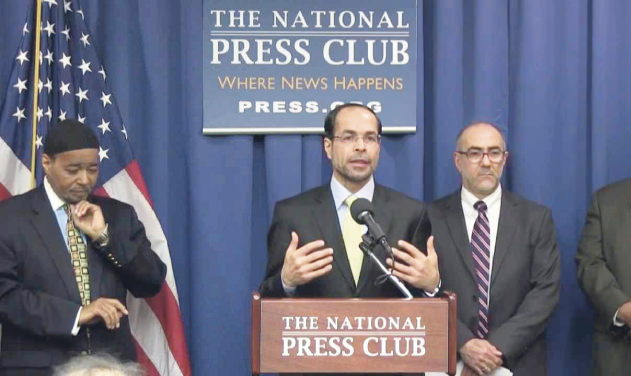 by Anadolu Agency Apr 20, 2015 12:00 am
The U.S. Council of Muslim Organizations said that characterizing the events of 1915 as genocide without proper investigation by independent historians will damage the efforts aimed at achieving reconciliation between Turks and Armenians.

In a statement released on Sunday, USCMO, the largest umbrella group of mainstream Muslim American organizations, said it is aware of the painful history of over 30 nations fighting for over 4 years and the loss of over 37 million lives in World War I, including those of the Armenians.

"As April 24 comes near, we share the pain suffered by Armenians during this period. We also believe that any acknowledgment by religious or political leaders of the tragedy that befell Armenians should be balanced, constructive and must also recognize Turkish and Muslim suffering," the council stated.

USCMO said characterizing the events of 1915 as genocide without proper investigation of these events by independent historians will also jeopardize the establishment of a just historical record of these events.

"As Americans, we are concerned about alienating a key ally, Turkey, through the one-sided declarations that political and religious leaders have made on this subject. The events of 100 years ago should be based on a consensus among historians and academicians with access to archives and documents from that era," the statement said.

As the only Muslim-majority member of NATO and current President of the G-20 Summit, Turkey has taken on a unique regional and global leadership role in ensuring peace and prosperity for all. Our government has been closely cooperating with the Turkish government on defeating ISIS while also alleviating the suffering of Syrian refugees, the statement said.

The council added: "While Muslim Americans sympathize deeply with the loss of Armenian lives in 1915, we also believe that reconciliation must take into honest account the broader human tragedy of World War I. Muslim Americans expect our leaders to act accordingly to ensure that American-Turkish strategic relations are not damaged by a one-sided interpretation of the 1915 events."

A tragedy for both sides; not 'genocide'

Armenia and the Armenian diaspora have demanded an apology and compensation for 1915 incidents as well as the recognition of the events as "genocide."

"Genocide" is defined, in 1948 Convention on the Prevention and Punishment of the Crime of Genocide, as "acts committed with intent to destroy, in whole or in part, a national, ethnical, racial or religious group."

Turkey stresses that the issue should be handled from a perspective of "just historical record," which is summarized as respecting the memory of both sides, and understanding what each nation experienced avoiding biased approaches into the history and political debates.

The Turkish government has repeatedly proposed to establish a joint commission of historians from both countries including international experts in order to conduct a scientific research and announce its results.

At least 16 million people lost their lives in World War I and another 20 million were wounded. The Ottoman, Austro-Hungarian and Russian Empires collapsed, boundaries changed dramatically and large scale human migrations occurred.

Armenians, like all the other people that made up the Ottoman Empire, also suffered immensely. The loss of so many innocent lives and migration from ancestral lands was a common fate.

During the war, some Armenian nationalists, taking advantage of the fact that Ottoman and Russian forces were fighting, collaborated with the Russian army in the hope of creating an ethnically homogenous Armenian homeland.

When the Russian army invaded eastern Anatolia, some volunteer Armenian units in Russia and the Ottoman Empire supported the invasion and some Armenian officials in the Ottoman army even changed sides and joined with the invading Russian army to fight against the Turks.

Some Armenian armed groups massacred civilians during Russian invasion. In response, the Ottoman Government tried to convince Armenian representatives and opinion leaders to stop such violence, but to no avail.

Thus, the government decided to close the Armenian revolutionary committees and to arrest or deport some high profile representatives on April 24, 1915 - a date which would later be selected to hold activities commemorating the so-called "Armenian genocide."

On May 27, 1915, the Ottoman Government ordered that the Armenian population residing in or near the war zone as well as those collaborating with the Russian army should be relocated to the southern Ottoman provinces.

While the Ottoman Government clearly planned that those relocating should receive proper care, many Armenians lost their lives under war-time conditions exacerbated by internal strife, local groups seeking revenge, banditry, famine, and epidemics.

There were also some unruly Ottoman officials who committed offences against relocated Armenians. Yet, historical documents prove that the Ottoman Government not only did not intend these outrages to take place but that it prosecuted the perpetrators.

Officials and civilians, who disobeyed the instructions of the Government to carry out the relocation in an orderly and secure fashion, were court-martialed and those found guilty were sentenced to capital punishment by the Government in 1916, long before the end of the First World War.

After the Bolshevik Revolution of 1917, Russia left the war, and left the region to Armenian militia, which invaded many Ottoman residential areas using Russian arms.

Eastern Anatolia was invaded again by the Armenian militia in December 1920, but the invasion was repulsed.

Today, the traumatic consequences of the 1915 events continue to distress Turks and Armenians.

The most significant development in the normalization between the two countries was in October 2009, when protocols were signed between Turkey and Armenia to "implement a dialogue on the historical dimension with the aim of restoring mutual confidence between the two nations, including an impartial scientific examination of the historical records and archives to define existing problems and formulate recommendations."

In December 2013, Turkey's then Foreign Minister and incumbent Prime Minister Ahmet Davutoğlu said, following his visit to Armenia, that one-sided approaches and incomplete evaluations should be avoided in an effort to find a solution.

He said history could only be built with "a just historical record."

In 2014, when incumbent President Recep Tayyip Erdoğan was the prime minister, he expressed his condolences for the first time to all Ottoman citizens, including Armenians, who lost their lives in the 1915 events.

In a recent speech, Erdoğan reiterated his message and said: "I offered a hand of friendship in 2014 to Armenia, but, unfortunately, it came to nothing."