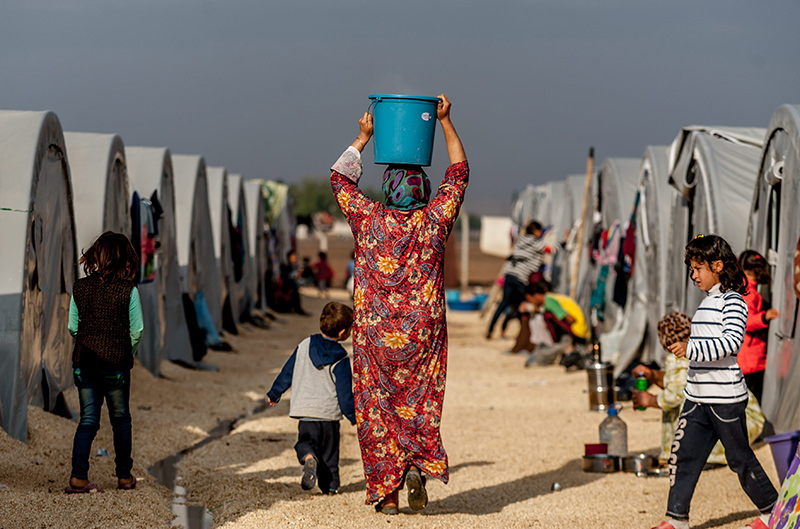 Main opposition Republican People's Party (CHP) Chairman Kemal Kılıçdaroğlu, in a speech in the southern province of Mersin where he introduced CHP candidates, pledged that the CHP would send nearly two million Syrian refugees who fled the civil war in their country back if it came to power with the June 7 general elections.

In an attempt to garner more votes from citizens in Mersin, which has sees one of the highest influxes of Syrian across the country due to its proximity to Syria, Kılıçdaroğlu said: "[The CHP] will send our Syrian brothers back. We will say to them, 'Sorry, but go back to your hometown.' "

"We have humanity in our hearts. We love people. We respect people. This is our core ideology," he said.

Saying that everyone is happy where they were born, Kılıçdaroğlu said that the CHP would bring peace in the Middle East, which has been in chaos for years.

Crossing the border barefoot, in wheelchairs or crawling while trying to carry their belongings – some heavier than their own weight – Syrians have been fleeing to Turkey for the last four years since the Syrian war began with calls for democracy and freedom in the country, but has since turned into a savage civil war killing thousands of people. The advance of the Islamic State of Iraq and al-Sham (ISIS) is triggering fears of even more displacement of the Syrian population.

War-torn Syrian refugees in Turkey saw how life can be ruined by both civil war and the terrorism that has metastasized in the region. Agencies including the Turkish Red Crescent and the Disaster and Emergency Management Agency (AFAD) provided humanitarian aid for those who crossed the border as the number of refugees has reached nearly two million in Turkey.

"We still do the best we can since the only chance they have is us," locals added.

Referring to these problems, Kılıçdaroğlu pledged to send Syrian refugees back to their hometowns, the economies of which could take nearly 30 years to return to 2010 levels due to the devastation equaling World War II, according to a 2014 report by the U.N. Relief and Works Agency.

Kılıçdaroğlu's latest election promise goes hand in hand with his 2014 remarks in a live interview with Ahmet Hakan on CNN Türk, when he asserted that to accept 1.5 million refugees into Turkey is treason. Kılıçdaroğlu corrected his remarks by saying that it is treason to actually produce politics that put the refugees in harsh conditions after Hakan asked: "Do we not allow those people who are in difficult conditions to come in?"

With Kılıçdaroğlu's stance on the ongoing refugee issue, some Turkish dailies likened Kılıçdaroğlu's remarks to the Boraltan Bridge Incident that occurred when İsmet İnönü became president and the CHP chairman and was granted the official title of National Chief and "unchangeable chairman of the CHP," after the founder of the Turkish Republic, Mustafa Kemal Atatürk, died. The Boraltan Bridge Incident is portrayed as a black mark for the Turkish government at the time, as 146 Azerbaijanis had sought refuge at the Boraltan border posts located in Turkey in 1944 to escape Stalinist persecution. The Boraltan commander had informed Ankara about the situation, but was told to send the Azerbaijanis back. After sending the first batch of Azerbaijanis back and watching them be shot to death at the Boraltan Bridge by Soviet border guards, the commander notified Ankara once again about the situation, but the reply was the same and all of the Azerbaijani asylum seekers were killed. The incident went down in Turkish history with last words of one of the Azerbaijanis to a Turkish soldier standing across the border: "I wish, my brother, you, instead of them, had killed me."

The main opposition is accused by the ruling Justice and Development Party (AK Party) government of siding with the Syrian President Bashar Assad. Generally claimed to have close ties with the Assad regime and for having a party policy of not interfering in the political affairs of the Middle East, the CHP came under harsh criticism in 2013 when the party sent a delegation to hold talks with Assad amid increasing tensions. Ankara, which has a solid stance against the Syrian regime and a strong belief that Assad should be removed to restore peace in the region, considers Assad the seed of the atrocities in Syria and holds his regime responsible for the killing of thousands of civilians.